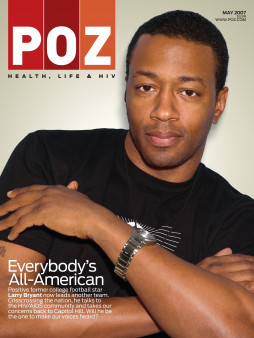 A League of His Own

A positive, former all-American football star gets drafted to another team with a goal: The Campaign to end AIDS.

On a hot South Carolina night filled with torrential rain and winds so strong they buffet the cows in the neighboring pastures, a small crowd packs into a rural wooden church. Larry Bryant, 40, walks to the front with a reserved but confident stride, fitting for this former all-American football player. He begins to speak with a dignified intensity that calms and focuses the onlookers as the rain drums down on the roof. “No one can advocate for HIV positive people better than HIV positive people,” he says, his rhythmic rhetoric building to a quiet climax.

Bryant’s South Carolina stop-off was one of many he made in 2005 to enlist positive people and AIDS advocates from around the nation to caravan across the country that November. They converged on Washington, DC, in the inaugural national action of the Campaign to End AIDS (C2EA), an ongoing endeavor conceived by New York AIDS organization Housing Works (HW) and modeled after Martin Luther King’s 1968 Poor People’s Campaign. While the march was not as large as many of its organizers had hoped, Bryant believes that it reinvigorated grassroots American AIDS activism after what he calls “a decade of complacency and denial.” He adds, “There has been a demographic change [in HIV positive people since the ’80s] and now the people most affected are the poorest and most marginalized [as opposed to white gay men].” Bryant says, however, that while these people have the most need, they often lack both the resources to advocate and access to the AIDS powers that be. He’s working to spread that power out. “C2EA is not [driven] by big names but by the woman in Mississippi who was discriminated against by a nurse—and by the woman from Florida who was fired because she is positive.”

Before Bryant could call the plays of 21st century AIDS action, he had to overcome his own fear of stigma, which kept him mum about his positive status for nearly 20 years. At 18, Bryant entered Norfolk State University in Virginia on a football scholarship. He was a defensive back in high school and college and had been pegged as a top NFL draft pick. In 1986, toward the end of his freshman year, he tested positive for HIV when trying to donate blood. The doctor merely told him he couldn’t donate due to the presence of HIV antibodies, and sent him on his way without counseling.

A long-term nonprogressor who has never taken an HIV med, Bryant hasn’t had problems with his physical health. But HIV did take its emotional toll. He quit football and school and moved home—and didn’t speak a word about HIV to anyone for over five years. “The year I was diagnosed two people in Florida got their house burned down because they were positive. I just sat around waiting to die,” he says. He finally disclosed to his parents. Eventually he became a preschool teacher in North Carolina and got involved with the AIDS community, without disclosing to those around him. In 2004, he spoke up. “I needed to be me. Silence takes a lot of energy.” He also realized that announcing his status as an HIV positive black man who was infected through heterosexual sex could corrode stigma and spark awareness, especially among the African-American community, which now accounts for 50% of new U.S. infections. “I got sick of hearing people complain about what’s not happening, instead of hearing about what we can do to solve problems,” he says. So he quit his teaching job and got a gig doing community outreach at a Houston AIDS organization.

Six months after the move, Housing Works’ cofounder Charles King met Bryant at a Houston rally, and the former all-American found himself getting recruited once again, this time to help mobilize people across the south to join up with C2EA. “He had a lot of leadership qualities and we needed someone positive people could relate to, particularly African Americans who were often not connected to existing advocacy groups,” says HW executive Robert Cordero.

After C2EA, HW appointed Bryant its National Field Organizer and stationed him in DC. “Grassroots activism is messy and chaotic,” says Cordero. “But with patience and by sheer force of will, Larry has gained the trust of local AIDS activists and PWAs.” He adds that in the past, reps from huge urban AIDS organizations would sweep into smaller locales, offer assistance and then leave. By contrast, Bryant gives people the resources to help themselves. Over the past year, he has traveled the country setting up grassroots movements in places that previously lacked the necessary infrastructure, linking disparate efforts into a united national front. Then he brings their messages back to DC to advocate for them with Senate staffers on the Hill. “I work like 23 hours a day,” he says. Cecelia Bryant, 59, says of her son’s new game, “It shattered him when he wasn’t able to play football anymore. This shows me that he has finally accepted himself.”

And Bryant has no plans to turn in this new jersey. He hopes to push AIDS into the 2008 election-year spotlight and is currently rounding up caravans across the nation to hit their respective state capitals this summer—using various rowdy tactics to push for housing, meds or whatever is most needed in their area. He says of the grueling glory of his grassroots achievements: “If we don’t make noise and piss people off, it’s impossible to make Edwards or Obama or Clinton understand the urgency. We are the people we’ve been waiting for.”