UPDATE: Visit http://www.aidshealth.org/wp-content/uploads/2015/07/War-on-Prevention-fact-checking-2015-07-09.pdf to read the AHF response to this article.

Just in time for gay pride, AIDS Healthcare Foundation published an ad criticizing pre-exposure prophylaxis (PrEP) in various gay publications around the country. The ad, ironically entitled “The War Against Prevention,” is nothing short of a scurrilous attack on Truvada (tenofovir/emtricitabine) as HIV prevention and on gay men’s right to protect themselves against HIV. The missive uses crafty manipulations, and select omissions, of the science behind PrEP to push the agenda of AHF’s notoriously anti-PrEP president, Michael Weinstein. 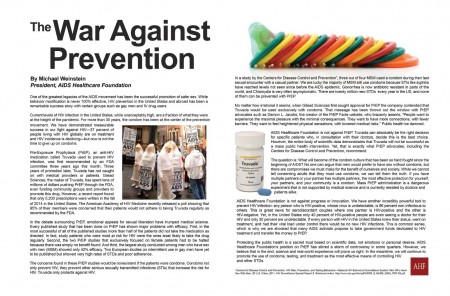 Click on the image to expand the AHF “War Against Prevention” ad.

Below is a fact check of various claims Weinstein makes in the ad. At times his assertions are simply flat-out wrong, if not bald-faced lies (presuming Mr. Weinstein, who has no scientific training, comprehends the science enough to lie about it). POZ’s review was conducted under the assumption that, because AHF placed the ads only in gay publications, this particular missive only addresses the concerns of gay men.

Something of a lone, and ferocious, wolf in the public opposition to PrEP, Weinstein has tinkered with his stance over time as increasing scientific evidence has supported Truvada’s use as a tool to fight the spread of HIV. Currently, he claims not to be against PrEP, saying that he maintains a “nuanced” position by arguing that Truvada may be a worthy option for some individuals, but should not be used as a broad public health intervention.

“Mass PrEP administration is a dangerous experiment that is not supported by medical science and is currently resisted by doctors and patients alike,” he claims in the ad.

Instead, he believes that the best way to prevent HIV transmission is through behavior modification and condoms, as well as through testing for the virus and treating people with HIV in order to render them vastly less infectious. This is a standpoint that dovetails neatly with his position as the leader of the world’s largest provider of treatment for the virus, with more than 420,000 patients in 36 countries.