’Tis the season for cinematic spectacle and red-carpet awards. Don’t overlook these recent documentaries about everyday heroes of the AIDS epidemic.

How to Survive a Plague is already generating Oscar buzz for its tight focus on the fight for HIV drugs and research—a fight that led to today’s lifesaving antiretroviral therapy.

United in Anger: A History of ACT UP directs its lens on the controversial—and influential— activist group AIDS Coalition to Unleash Power.

Vito offers a portrait of AIDS activist and journalist Vito Russo, who explored LGBT imagery in film through his 1981 book The Celluloid Closet, also a 1995 documentary.

We Were Here was released in 2011 and offers an unforgettable look at how San Franciscans responded when the epidemic first hit. Turns out  that lesbians are unsung heros. 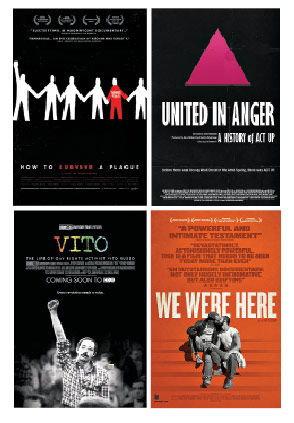