Why do some med-free HIVers never get sick? New research is shining a hard-science light on stress and the mind-body mystery.

For Rebecca Denison, the summer of 2000 marked a terrifying turn in her long journey with HIV. After 18 years of uninterrupted good health since becoming infected -- and the birth of HIV negative twin girls in 1996 -- the Berkeley, California, AIDS activist, then 38, suddenly developed cold sores and a hard-to-treat vaginal yeast infection, both of which hung on for months. Meanwhile her CD4 count -- which had always hovered between 700 and 800 -- fell to a new low of 500.

What sparked the downturn? “I was extraordinarily stressed out,” she recalls, “and feeling overwhelmed by both the magnitude of the international epidemic and my own responsibilities as executive director of WORLD” -- Women Organized to Respond to Life-Threatening Disease, an AIDS service and advocacy group she founded in 1991. Plus, in the back of her mind was the knowledge that three friends -- role models who had each survived HIV for 17 years -- had all died before making it to 18. Denison was scared. “If you’re running a race and everyone else has fallen to the side, you’re grateful to survive,” she muses. “But you wonder how long you’ll make it in uncharted territory.”

Denison is one of the elite but expanding group of people with HIV known as long-term nonprogressors (LTNPs). The term is generally applied to those infected for at least eight (some say 10) years who maintain a CD4 count of at least 500 as well as low levels of HIV in their blood and who have never had AIDS-related symptoms or taken antiretroviral drugs. Estimates are that 1 to 5 percent of HIVers fill the bill. But only in the past decade have researchers begun to study this curious group, hoping to learn more about the mysterious nature of the immune system and its response to HIV. Predictably, longtime schisms among medical scientists soon began to play out in LTNP research.

The predominant wing -- attracting the major funding and recognition -- has focused on viral strains, genes and immune cell types. Initially, scientists believed that LTNPs might be infected with a defective type of HIV that was missing its nef gene, which might render the virus harmless; later they explored the possibility that this group might have a mutant form of the gene CCR5, which might help block HIV’s entry into cells. In 2000, a study at the National Institutes of Health found a variation in an immune-system gene called the human leukocyte antigen, which might hinder certain steps in viral replication. While this research did clarify that it is something in the immune system, not in the virus, that impedes HIV progression -- and while much of it continues to bear fruit -- none of these findings explains every case of LTNP.

Meanwhile, laboring quietly in the background, investigators in two other fields have helped unearth contributing causes of HIV progression. Nutrition researchers have found that HIVers’ vitamin and mineral levels can help predict their survival prospects. And the specialty of mind-body medicine has witnessed dramatic advances. For years, studies of heart disease, cancer and diabetes found that sustained stress, lack of social support and depression correlate with sickness. Throughout the 1990s, similar evidence accumulated for HIV, with small university studies published in peer-reviewed journals offering scientific support for the following intuitive conclusions:

Intriguing though these results were, some were contradicted by other studies that failed to find similar correlations. And haunting all of these investigations is the question: If there is a mind-body connection in HIV, how does it work biologically?

A developing field called psychoneuroimmunology, linking the “hard” sciences of neurology and immunology with the “soft” sciences of psychology and sociology, is devoted to just that question. A major breakthrough came in August 2000 with the release of a nine-year study that tracked 82 HIV positive gay men who were, at the outset, asymptomatic and had more than 200 CD4 cells. Jane Leserman, PhD, a research associate professor of psychiatry at the University of North Carolina in Chapel Hill, found that the men with the highest levels of stress, anger and denial -- and the least social support -- progressed to AIDS the fastest. The study’s most exciting finding came from its measurement of a stress-related hormone called cortisol. Leserman’s team found that men with higher cortisol levels were more likely to progress to AIDS.

When the body is under any type of stress, the brain enters “fight or flight” mode, directing the adrenal glands to secrete cortisol as well as adrenaline and norepinephrine (both are also hormones). Pioneering studies found that rats that were highly sensitive to stress pumped out more cortisol than the low-stress types. In other studies, mice exposed to both viruses and stress were more prone to infection and death. What could this mean in the case of HIV? One theory holds that elevated cortisol causes levels of another important hormone, DHEA, to drop, and this in turn affects the body’s production of cytokines -- the chemical messengers that prompt immune cells to action. Instead of producing Th1s, a type of cytokine vital to controlling HIV, the body produces Th2s -- the wrong response. That’s when the disease progresses. Research shows that Th1s are dominant in LTNPs.

High levels of cortisol are also known to inhibit the action of natural killer (NK) cells, which provide an important supplementary defense against HIV. An earlier study by Leserman found that HIV positive men with more stressful life events had lower NK cell levels. And the University of Miami found an association between pessimism and impaired NK-cell activity among a group of black women with HIV.

Of course, not everyone is swayed by these correlations. Carl Dieffenbach, PhD, associate director of the Division of AIDS at the National Institute for Allergies and Infectious Disease (NIAID), for example, dismisses Leserman’s work. “Cortisol levels fluctuate greatly on a daily basis,” he says. “Lots of additional data still need to be captured.”

A pathbreaking HIV study published last October by Steven Cole, MD, associate professor of medicine at UCLA, offered evidence for the role of norepinephrine. Among 13 HIV positive men studied for a year, those with higher levels of stress -- shown by activity of the autonomic nervous system -- had higher levels of HIV and got far less benefit from HAART therapy.

A parallel lab study by Cole’s team found that when CD4 cells were exposed to norepinephrine, HIV replication increased tenfold. “Our findings propose that high levels of stress, day in and day out, may eventually wear down the immune system,” Cole says. “It’s like a wave hitting a rock on the beach. One wave won’t do much damage, but years later, that rock gets ground into the sand.”

Still, these recent findings in psychoneuroimmunology would all seem to point to one vital question for HIVers: Can psychological counseling and training -- somehow -- slow down or even stop the progression of HIV disease? A team of researchers led by Neil Schneiderman, PhD, and Gail Ironson, MD, at the University of Miami’s multidisciplinary Behavioral Medicine Research Center think so. They have designed various HIV-specific psychological training and counseling programs (the Behavioral Management and Stress Responses in HIV/AIDS, at 305.284.4186). These include stress-management courses that emphasize positive thoughts, coping skills, assertiveness, anger management and social support strategies; a separate unit on relaxation covers muscle relaxation, meditation and breathing exercises. Similar programs have since been established elsewhere, most notably at Harvard Medical School (the Mind-Body Program for HIV/AIDS, at 617.632.7373) and at San Francisco’s Shanti Project (the Learning Immune Function Enhancement, or LIFE, Institute, at 415.674.4713).

In 1994, Miami researchers found that program participants (at different disease stages) who did the most homework and practiced relaxation most often were least likely to have declining CD4 counts or to die. Over the past three years, additional program studies have generated these provocative findings: 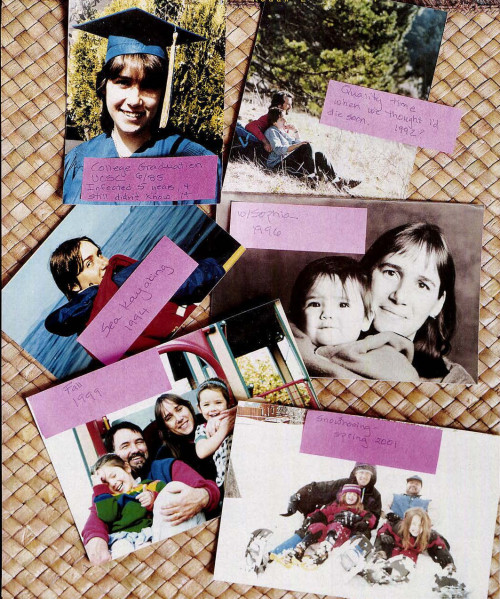 Rebecca Denison has never taken a stress-management course, but she recognizes the factors that got her back on the health track: “Social support -- my husband really backs me up, as have family and friends. Spirituality, though not religion. And the joy I get from life with my 5-year old twins.” Her rebound from her immune downturn is instructive. “Last January,” she recalls, “after years feeling that I had to keep the entire agency going, WORLD hired a new executive director. I scaled back my responsibilities, and my stress level dropped precipitously.” Her yeast infection and her cold sores began to resolve. Denison’s CD4s rebounded to the 800 range. “When I got the news,” she says, “I threw my arms around the new director and told her, ’I totally believe this is because you’re here.’”

Psychosocial researchers caution, however, against using their findings to translate New Age nostrums into self-blame. “Changing your schedule to reduce stress, building a support network and doing whatever it takes to relax, exercise or pray are all positive,” says Esther Sternberg, a researcher at the National Institute of Mental Health. “But if you’re unable to reduce stress and the disease progresses, it’s not your fault. Part of your response is in your genes.”

One new University of Miami finding is especially encouraging: Researchers found that life purpose, friendships and altruistic involvement strongly distinguished LTNPs from progressors. Denison, a dedicated activist, is Exhibit A. “Having a purpose in life has definitely helped keep me alive,” she says. But she’s reluctant to claim that particular behaviors or thoughts can guarantee survival: “Plenty of other people did all the right things and aren’t here any more. I don’t want to disrespect their hard work.”

Ultimately, the key seems to be drawing wisdom from all the medical disciplines. Listen to Leserman: “It behooves the doctor when taking a patient’s history to ask, ’What’s going on in your life, and how are you dealing with it?’” And UCLA’s Steven Cole: “Minimizing stress is beneficial even if you’re on state-of-the-art medical therapy. The goal is to have the best of both worlds, with both drugs and lifestyle on your side.”

Rebecca Denison, still med free after all these years, agrees: “I can’t say I’m a long-term nonprogressor simply because I have little stress and always manage it well. But I can say that clearing space to take care of myself -- and being present for my health -- has made a real difference.”

A handful of experimental drugs may curtail harmful levels of stress-related hormones -- and that could be a very good thing for the immune systems of HIVers. Some leading contenders:

In addition, a range of nutrients --including vitamins B1, B6, B12, C, the amino acid tyrosine and the antioxidant alpha-lipoic acid -- have long been found to be helpful in buffering the effects of stress. Talk to a nutritionist. For depression, of course, science has an array of potent meds, including antidepressants such as the Prozac-type SSRTIs, Wellbutrin and the Tricyclics, as well as drugs for anxiety, such as the benzodiazepines,including Valium and Klonopin. All these are best taken with a regular chaser of psychotherapy. Some HIVers swear by St. John’s Wort, an herb.Others use Bach flower remedies. Acupuncture, exercise, diet and pet ownership are also popular destressors.