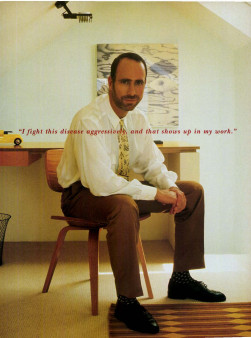 “I fight this disease aggressively, and that shows up in my work.”

For many years, Los Angeles-based architect Frank Israel, 49, kept his condition under wraps for fear of losing both clients and friends. But with the appearance of KS lesions on his face and the subsequent (successful) chemotherapy treatments, he has confronted HIV and used it to fuel his creative work. Now he thinks is has made his work stronger. “You have to fight this disease in an aggressive way, and that shows up in my work. It is less formal, more twisted and distorted. It’s like the combination of drugs I take—nobody is sure what they all do together. It makes the work more dynamic,” he says.

In the last few years, Israel has become one of the more recognized architects in the country. Books on his work lay spread open at design schools across the country, clients clamor for his attention and he has buildings under construction from Florida to San Francisco. Israel became famous during the 1980s for his ability to combine the lessons of history with the materials of everyday life into forms that were as comfortable and colorful as a sunny Southern California day. His almost ephemeral designs gave the freedom of Postmodernism a discipline and richness few other designers have been able to achieve.

Trained at Yale, Columbia and the University of Pennsylvania, Israel moved to Los Angeles to teach at UCLA in the 1970s. For a while he designed sets, an experience that gives walking through his work the power you might expect from seeing a good movie. Frustrated by the culture of “the industry,” he returned to his architectural calling by designing a series of small houses and apartments that were suffused with deep colors and stark forms ordered by grids of wood and plywood. Playful and immediate, combining classical forms with Hollywood bravura, they appeal both to the senses and to the mind. His success at creating scenes for everyday life that made people comfortable rather than awed gave him the entrée to design larger projects, including freestanding houses, the offices of several film companies, a private museum, a library at UCLA and a large arts school for UC Riverside.

During that whole period, Israel knew he was HIV positive. "My lover of 12 months died very suddenly of Pneumocystis in 1982, and I started to notice that I had swollen lymph glands shortly afterwards,“ Israel recalls. ”I went to the very first meeting Larry Kramer called to figure out what was going on with this mysterious disease.“ The intensity that marks the architect’s designs reminds you of the swelling forms, musculature and poise of an athlete’s body in motion, and Israel admits that the preoccupation with his body pervades the sweeping, arcing forms of his most recent work. Always an athletic person, Israel kept himself in shape by swimming and working out, even taking part in triathlons. As the disease progressed, he transformed himself ”from a gaunt type of guy into something more bulked-up. I fortified myself by eating," he says, preparing a breakfast of eggs, yogurt and a protein drink.

Despite his rigorous regime of workouts, Israel maintains an active practice with half a dozen employees in Beverly Hills. Making architecture is a part of his therapy: “It keeps me going in this conservative age,” he says. In fact, his health and his work are bound tightly together. “I like to think that I would have never sold out, but being sick has given me a greater desire to create work that is more radical. Being positive has given me the freedom to take risks.”

Looking out over the loft-like apartment he has furnished with his own furniture pieces and collection of homoerotic artwork, the architect concludes, “It opens me up to experience. These days I like going to Hollywood, where they’re building the subway tunnel, and buying a taco at one of the stands. I eat it there, looking at the whole surreal scene: The white smoke, the hundreds of workers, the big hole in the ground. I take in the vision and I think it’s very beautiful—not in the classical sense, but because it is something that is evolving, just as buildings are never resolved, just as my body is evolving. Someday something may come along to stop what’s happening to me, but for now I am just changing.”