Each year when people in cities all over the country sit down to eat at certain restaurants, part of their dining experience includes taking a bite out of HIV/AIDS.

This year Ted Allen, host of the Food Network series Chopped, clocked his seventh season as a spokesperson for the annual, one-day event Dining Out For Life. What’s more, 2014 marks film icon Pam Grier’s fourth time repping the HIV/AIDS fundraiser. Here, the two share how the event has added a deep and satisfying flavor to their lives as they work on behalf of finding a solution to the virus.

Ted, what attracted you to this event in particular?


Dining Out for Life (DOFL) is just a win-win-win situation. In just one day, this operation raises over $4 million and all the money raised in each community stays right in that community to help your friends and your neighbors fight HIV/AIDS. I think most of us can agree that the real heroes in this fight are the activists and the people with HIV who fight every day to stay healthy. DOFL is a way that anybody can make a truly meaningful contribution to the effort to eliminate AIDS by going out to dinner. I mean, it’s almost like a responsibility to do that; it’s so easy.

How exactly do restaurants participate in this event?

DOFL certainly has volunteers who reach out to restaurants, and restaurant owners and chefs spread the news by word of mouth that, hey, this event fills my restaurant with loyal customers. When this all began, AIDS was something associated almost exclusively with the gay community. I’ll tell you one thing, there was no one more loyal than people from the LGBT community for restaurateurs who stepped up for us back in the day when the virus was exclusively our problem. Now, of course, we all know that HIV is everybody’s problem. The virus affects so many different communities, particularly women of color. We have a whole new generation of gay and lesbian people who didn’t see the first plague. But, still to me, I feel like whenever you’re trying to fight a disease and raise money for a good cause the first place anybody goes is the restaurant community, and they always step up. It’s such a culture of generosity. It’s one of the things about the business that I really love.

What are your recollections of the history of the disease?

Recently, I did an interview and somebody asked me what did it feel like the first time I heard somebody I knew was infected. I said, ‘Oh, gosh, it felt like my stomach had dropped out of my body because this person I know is going to be dead soon.’ This is back in the days when [Ronald] Reagan was the president and nobody knew what this illness was. Fortunately, thank God, I will tell you that that person is still very much alive and kicking. And for the people who do get infected these days, the therapies are so much more effective. This means HIV/AIDS is no longer the death sentence it once was. But the ’80s was a scary time. I remember when the New York Times first called the virus GRID [gay-related immunodeficiency disease]. Now so much progress has been made because of researchers and activists and fund-raising events like DOFL. Today, the challenges are different. Thank God, things are so much better for people with HIV and for gay people in general. But HIV/AIDS is still a very serious health problem, so the work’s not done yet.

There are a lot of people who don’t consider HIV/AIDS a problem. How do you feel about the complacency that’s set in during the last few years?

Well, that’s why we’re still doing this, isn’t it? It is true that there are treatment regimens that can, for some people, work with a single pill a day. It’s an extraordinary achievement that still costs a lot, and these pills have side effects, and sometimes they’re terrible side effects. I think it’s still very important that people out there should play safe and get tested. One of the best things about the treatment regimens we have now is that people can utilize them to become less infectious to others. There is a lot of great news out there, but it’s not true that HIV doesn’t matter, and it’s not true that it’s OK to get it. You still really want to protect yourself and your friends and your loved ones, and it’s still very serious.

Of the many celebrities you’ve worked with who share your passion about DOFL, name some who stand out in your mind.

Well, I’ve got to say, of course, Pam Grier—Foxy Brown! What a lady! I got to spend time with her the last time we shot a PSA for DOFL. She gave me a copy of her biography and I read it. She’s lived such an interesting life and she’s so vibrant; she’s really a charismatic and fascinating woman. And then our other spokespersons, Mondo [Guerra] and Daisy Martinez, just delightful people to be around. This year, DOFL turned us into animated superheroes. We raise money for a serious purpose, but the event itself is actually a lot of fun. This is about getting together with friends and ordering an extra bottle of champagne and feeling good about having dessert. And you want to push that tab up a little bit because the more you spend the more we raise.

Pam, how do you feel about continuing the commitment you made to be the spokesperson for Dining Out for Life?

I’d like to see DOFL make more than $4 million, or I’d like to see the event happen every day. And I’d like to see more people involved because HIV/AIDS is a human issue. Think about it: Stuff a dollar in an envelope at a restaurant that’s participating or send your dollars to a place where your family or friends live, or where an organization is based. The mantra of my family is if you take small steps you still move forward. That means if a million people send in a dollar that’s a lot of money.

What satisfaction do you get out of working with DOFL?

Every time people see Dining Out for Life it’s a subconscious seed that’s planted. The event is good and positive, so only a good and positive plant could come from that seed. DOFL has succeeded and it’s reaching more and more people and places.

What changes have you observed in the conversation about HIV/AIDS during the time you’ve been involved in the Dining Out for Life campaign?

Times are different than they were before. People’s attitudes have changed. HIV/AIDS is not a life sentence; you can live with the illness. Through Dining Out for Life, the Food channel, the commercials, the chefs, people promoting nutrition, these are the seeds that are planted. Also, I can say, hey, I took a little step. I couldn’t change the world, but I made a few steps. I can say that I was a part of it and my family knows it, and that’s the contribution I made. 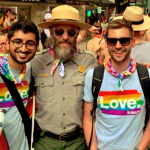 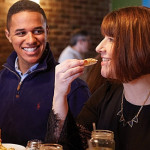 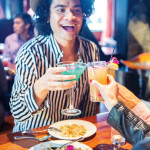