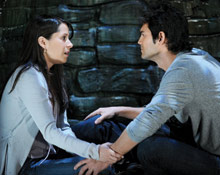 Oh the tangled webs they weave: the tortured soul, the police commissioner’s niece, the forbidden love. The sparks! The passion! The…HIV! The HIV? Yes, the HIV. In the mid-’90s, General Hospital, a daytime soap on ABC, became one of the first TV series to feature an HIV-positive character, when a principal character, Robin Scorpio (played by Kimberly McCullough), learned she was positive. Using Robin’s life as a foil, the show covered antiretrovirals, safe sex and prevention of mother-to-child transmission. But, at press time, nefarious forces (in the form of a murderous stalker) kept Robin from properly taking her meds, ultimately causing her drug regimen to fail. While we know many good things must end, we’re sad to see the exit of such a generally accurate and positive example of a person living with HIV. We applaud the show’s writers and producers for shining the spotlight on a topic that rarely gets placed on center stage. Bravo!