Good news for Intelence (etravirine) users: Instead of two 100 milligram (mg) tablets twice a day, the recent approval of a 200 mg tablet will permit one pill, twice daily dosing.

The approval of the 200 mg formulation, manufactured by Tibotec Therapeutics, was announced by the U.S. Food and Drug Administration on December 22. Intelence was originally approved in 2008 for treatment-experienced patients who have HIV strains resistant to other non-nucleoside reverse transcriptase inhibitors and other HIV drugs. Until now, it has only been available as a 100 mg tablet.

The new 200 mg tablets should still be taken following a meal, such as breakfast and dinner, twice a day.

Many People With HIV Could Switch to Newer, Safer Regimens

FDA Updates the Labels of Intelence (Etravirine) and Prezista (Darunavir) 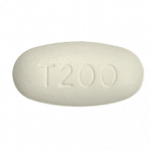