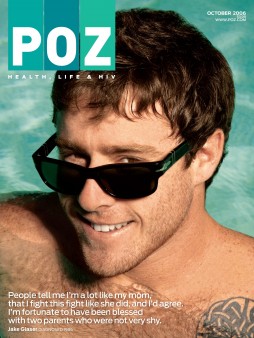 Jake Glaser, son of the late HIV positive AIDS activist Elizabeth Glaser, shoulders his mother’s legacy of helping children infected with HIV/AIDS. Things have changed a lot since she founded the Elizabeth Glaser Pediatric AIDS Foundation and fought to her death to keep him alive. Jake, who is also HIV positive, is ideally positioned to fight for young ones infected today. He’s hip, from Hollywood and speaks a language kids can understand. Will Washington and the rest of the world listen?

It’s a hot August day in Rustic Canyon, an affluent enclave in West Los Angeles, and the heir to one of America’s most remarkable AIDS legacies is kicking back with his best friend. Jake Glaser, son of the late Elizabeth Glaser—who started the Elizabeth Glaser Pediatric AIDS Foundation with two friends in 1988—is hanging out at his buddy Zander Fiel’s house, tucked away at the end of a long dirt road. Wearing a tank top and his “regular” (nondesigner) jeans, Jake, 21, bangs on a piano in Zander’s dad’s recording studio. (Jake has played jazz and blues on the ivories since age 13.) Best friends since elementary school, both Jake and Zander have big-deal dads (Jake’s is actor Paul Michael Glaser, “Starsky” of the hit ’70s show Starsky & Hutch; Zander’s composes musical scores for films). l Jake and Zander have shared much, from an earthquake to Elizabeth’s death (Jake was at Zander’s house the day she died) to Jake’s battle with HIV (his mother, diagnosed after she was pregnant, unknowingly passed the virus to him at birth; Zander was one of a few friends who knew he was positive growing up). Today, they are both in awe of the photographer, Clay Patrick McBride, who has come to take Jake’s picture. McBride has shot some of the music biz’s hottest stars, like Jay-Z and the Roots; between shots, the boys press him for industry dirt—the richest currency in their privileged Hollywood world.

Having buried his sister, Ariel, who died of AIDS in 1988 (when she was 7 and he was 3), and watched his mother succumb to the disease six years later, Jake is deeply committed to continuing his mother’s mission to help children with HIV/AIDS around the world—and to see that future generations don’t have to deal with it. To date, the Elizabeth Glaser Pediatric AIDS Foundation has raised more than $130 million and is the leading national nonprofit organization dedicated to identifying, funding and conducting critical pediatric AIDS research. It also funds programs in 18 developing nations to prevent mother-to-child transmission of HIV. Jake’s been a foundation spokesperson for years. Recently, after dropping out of George Washington University to work with a music video production company in New York, he tried to quit the foundation. A foundation official said that this wasn’t technically a job he could quit. So Jake redefined his role, getting out from behind a desk and spending more time on podiums, talking to young people about the dangers of HIV. His job is arguably as important as the search for better treatment—and a cure—because unless paired with intensive prevention efforts, treatment will never quell the pandemic. Jake’s is increasingly the new face of the epidemic: Every day, globally, 6,000 people between the ages of 15 and 24 become infected with HIV.

“[The work I do at the foundation] is not something that will ever disappear in my life,” he says. His father, Paul, adds, “Jake has realized a level of empowerment in his situation as opposed to being a victim, which has enabled him to find strength for himself and others.”

The persol sunglasses, the baseball cap low over the eyes, the cool jeans: Jake looks the part of a Hollywood young gun. “When I go out,” he says, “on go the designers. Oh, yeah, and I can pull off [wearing] pink. You can print that.” His verve, vernacular and occasional Mohawk are that of an up-all-night hipster, but if he looks a little sleepy, it’s more likely because he was up late talking with a friend (“I’ve been through a lot of counseling,” he says, “so I’m a good counselor”) or reworking an AIDS speech than because he was partying. Not that he doesn’t enjoy himself; Jake’s power lies in his connection to his audience.

“After I speak at a college, I’ll often go to a party and have a good time with the kids,” he says. “That really makes an impression on them. They’re like, ‘Wow, this guy’s no different from anyone else. There’s nothing to be afraid of.’

“There needs to be more education among younger America,” he adds. “People want to learn about the disease. But we’re not allowing people to come out and have fun and learn something in the process. That’s why I’m trying to get fundraising events started at music venues, like the House of Blues and Whiskey a Go Go. When people hang out with their friends and at the same time get this stuff put in their head, subconsciously, it resonates.”

Jake’s parents gave him a lot in utero: looks, intelligence, personality, strength of character, a sense of social responsibility, HIV—and a genetic mutation that helps his body fight HIV. Jake inherited a mutation of the CCR5 gene (called “delta 32”) from his HIV negative father. Delta 32 has helped his body delay HIV’s onset by restricting how it enters T cells. Jake will celebrate his 22nd birthday this October 25th, having survived HIV for nearly the duration of the pandemic. For the last five years, he’s been HIV drug–free.

Just as the genetic mutation Jake inherited from his father has prolonged his life, his mother’s influence has helped too. “People tell me I’m a lot like my mom, that I fight this fight like she did, and I’d agree,” says Jake. “I’m fortunate to have been blessed with two parents who were not very shy. I’m not afraid to stand up in front of thousands of people.”

“The only option I have is to make sure that every morning I dive into my day. I like to think of life like surfing. I dive into my day by charging into the biggest wave that’s coming in. You only live once so you might as well jump on it,” he says.

Jake shares his mother’s thick brown hair, a smile big and warm enough to melt a glacier and her tenacity and irreverence when confronting any barriers to the foundation’s mission. “I can’t stand the political bullshit that goes on around HIV/AIDS,” says Jake. “My mom pretty much went into the whole thing with the idea of ‘Screw politics. It’s not something that’s going to slow down my vision.’ I’m the same. A lot of times when I go to give a speech, I’ll write it, and the foundation will try to rewrite it to make it politically correct. Every single time, I tear it up and throw it away.”

Jake has his own take on where the foundation, which his mother founded with friends Susie Zeegan and Susan DeLaurentis, needs to go next. “Our foundation has done such great work developing new drugs and dispersing new drugs,” he says. “The reason we’ve gotten to a roadblock [in treatment] is that the drugs are so good and the majority of people in our country can get access to them, including those who have the voices  to make us believe that this is a manageable disease. So people aren’t as concerned with HIV today. The next big thing is to break away from the typical medical belief of ‘This is cancer, so we must study cancer’ or ‘This is AIDS so we just study AIDS ‘This is diabetes, so let’s only study diabetes.’ The foundation’s true message is about the integration of research. My next move would be to make sure there’s a network for all these doctors to share their information to learn from others and other diseases. That’s where the next breakthrough’s gonna come through.”

For Jake, as for all who struggle with HIV, the quest and hope for a cure must be balanced with the daily reality of living with the virus. ‘I’ve come to the point where—even knowing about the mutated gene I have and the medicines that can prolong our lives—I have to face the fact that this is something that could potentially kill me,”  he says.

His father, with whom Jake is very close, helps him address the disease philosophically. “You are powerless against the virus but not against your fear,” Paul says. “My wife taught me this expression: ‘Our fears are like dragons guarding our deepest treasures.’ Mortality has a presence in our lives since the moment we are born. Those who have a chance to face what will happen to us all have the opportunity to choose between practicing awareness of that fact or putting their head in the sand. Your fear is your greatest ally because it can lead you to your heart.”

Jake agrees. “I live beyond fear because of a higher comfort and understanding for how I should live my life. Definitely, HIV/AIDS and the whole story of how my family has lived through it has helped mold that thinking for me.” He pauses. “Things could end tomorrow, and I would feel perfectly content with what I’ve done in my life.” Like his mother before him, Jake’s understanding of the fragility of tomorrow makes today glorious indeed.