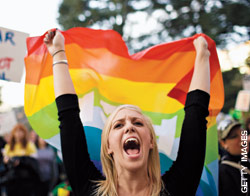 The Issue
In May 2012, President Barack Obama became the first U.S. president to announce his support for same-sex marriage. “I’ve always been adamant that gay and lesbian Americans should be treated fairly and equally,” he said. Unfortunately, many others don’t share his opinion. Around the world and in our own country, homophobia runs rampant. It undermines civil rights, destroys a community’s social and economic fabric and can flare into harsh violence. As a result, too many lesbian, gay, bisexual and transgender (LGBT) people are stripped of their ability to live freely and openly—two factors essential to a person’s mental and physical well-being.

Why This Matters To You
Currently, 76 countries have laws that criminalize behavior on the basis of sexual orientation or gender identity. In at least five countries the death penalty may be applied to those found guilty. These countries are increasingly hostile to LGBT people, and discrimination—which is often violent—occurs behind closed doors, in the workplace and on the streets.

Here in the United States, we have made great strides toward equality for the LGBT community, but many people still face discrimination. LGBT people may be fired from their jobs, denied housing, barred from giving blood and exempt from anti-bullying laws; health insurance plans can exclude transgender needs; same-sex marriage is not legal or recognized by most states; same-sex partners are not always eligible to receive employment or financial benefits or serve as health care proxies; and adoption by same-sex couples is still under debate. Anti-gay policies can hinder sex education and health care, and they can diminish a person’s self-worth—all of which can lead to activities that put people at higher risk for HIV.

What You Can Do About It
Speak up for LGBT rights and against homophobia. Check out a list of action items, including petitions and campaigns, that affect LGBT people at hrc.org, the online home of the LGBT group the Human Rights Campaign. State laws differ. Research your state’s position at hrc.org/states and learn how to fight for equality in your community. Finally, throw your support behind candidates who are working for LGBT rights. Visit usa.gov/Contact/Elected.shtml to find your elected representatives and ask them to support legislation that promotes fairness and equality for all.