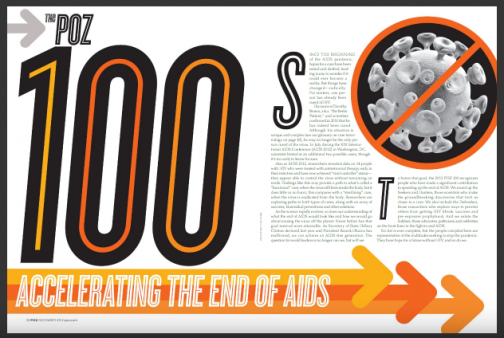 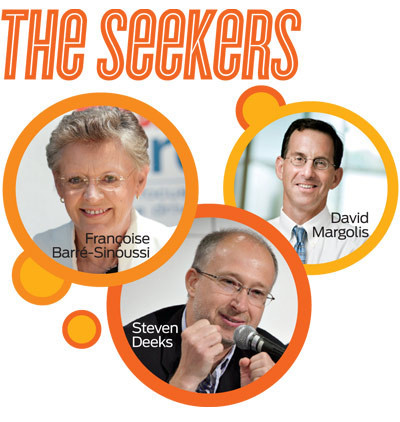 The International AIDS Society (IAS) Scientific Working Group on HIV Cure is a group of scientists and clinicians who have launched a new road map to ending AIDS. Their report “Towards an HIV Cure” outlines and prioritizes areas of research to reach that goal. Steven Deeks, who cochairs the working group along with IAS president Françoise Barré-Sinoussi, says the report’s larger goal is “to engage the community, inspire people to work in this area and use this document to raise interest and perhaps funding.” Below are the 37 members of the group.

Brigitte Autran
and Christine Katlama
Autran is a professor at the Pitié-Salpêtrière Hospital of the Pierre and Marie Curie University (UPMC) in Paris, France. Katlama is head of its AIDS Clinical Research Unit. Their ERAMUNE-1 clinical trial is investigating if HIV can be eradicated with increased antiretroviral treatment and the IL-7 vaccine. (See “Hunter” Robert Murphy for info on the sister trial ERAMUNE-2.)

Françoise Barré-Sinoussi
The virologist won a Nobel Prize in 2008 for her role in the 1983 discovery of HIV, but instead of slowing down she’s doubling down on the fight. This year she became IAS president, and she cochairs (with Steven Deeks) its Scientific Working Group on HIV Cure.

Monsef Benkirane
A researcher at the Institute of Human Genetics at the National Center of Scientific Research in France, he’s been involved in the study of a protein called SAMHD1, which helps protect the molecular material in some cells that HIV needs to reproduce. Such knowledge may slow or stop the ability of HIV to spread.

Ben Berkhout
A professor of human retrovirology at the University of Amsterdam, the Netherlands, Berkhout has been experimenting with gene-silencing therapy—technically known as RNA interference (RNAi)—to make RNAi-producing genes that can shut down HIV replication and to deliver them to immune cells.

J. Scott Cairns
A former program officer for the Division of AIDS at the National Institute of Allergy and Infectious Diseases, Cairns consulted with IAS, offering pivotal help to the first three gatherings of its Scientific Working Group on HIV Cure and their agenda-driving reports.

Nicolas Chomont
How can we activate HIV hiding in reservoirs? As an assistant member and a principal investigator at the Vaccine & Gene Therapy Institute of Florida, Chomont and his lab are exploring a variety of approaches to reactivate HIV production in long-lived cells.

Tae-Wook Chun
A scientist at the National Institute of Allergy and Infectious Diseases, Chun and his colleagues were among the first to find HIV reservoirs, those long-lived, HIV-infected CD4 cells impervious to ARVs. That was in 1997; since then, he’s been heavily involved in researching ways to eradicate them.

Melissa Churchill
As associate professor and head of the HIV Neuropathogenesis Laboratory at the Burnet Institute in Melbourne, Churchill is studying how HIV enters the central nervous system and infects cells there, with the hope of figuring out how to remove the virus safely and effectively—and how to keep it out.

Steven Deeks
Using disulfiram (better known as Antabuse, used to treat alcohol dependency) against HIV reservoirs is one of the many areas of research for the professor of medicine in residence at the University of California at San Francisco. (Click here to read the POZ Q&A with Deeks.)

Michele Di Mascio
He’s the chief of the AIDS Imaging Research Section at the National Institute of Allergy and Infectious Diseases. To help accelerate cure research, his group is utilizing technology that allows researchers to actually see where HIV’s counterpart SIV hides in primates.

Alain Lafeuillade
This HIV researcher is chief of the Infectious Diseases Department at General Hospital in Toulon, France, and an adjunct professor at the Institute of Human Virology at the University of Maryland School of Medicine. He’s also a coeditor of the journal HIV Clinical Trials.

Alan Landay
The professor and chair of the Department of Immunology/ Microbiology at Rush University Medical Center in Chicago helped establish its HIV research program about 30 years ago. As cochair of the Office of AIDS Research Panel on Pathogenesis at the National Institutes of Health, he is currently focusing on immune-based HIV therapy.

Michael Lederman
A professor of medicine and codirector of the Center for AIDS Research at Case Western Reserve University in Cleveland, he researches immune deficiency and ways to enhance immune function in people with HIV.

Sharon Lewin
She’s one of the first researchers to state boldly and clearly that a cure for HIV is possible. Her Melbourne-based Monash University laboratory has multiple funding streams to study HIV latency reservoirs, including a trial of Zolinza (vorinostat).

Frank Maldarelli
He’s the head of the Clinical Retrovirology Section at the HIV Drug Resistance Program of the National Cancer Institute in the National Institutes of Health. Stemming from his extensive HIV drug resistance research, Maldarelli is focusing on what happens to HIV when ARV therapy is intensified—a possible component of an approach to a cure.

David Margolis
The University of North Carolina researcher works with HDAC inhibitors as a way to flush HIV from its hiding spots. Data reported this year suggest one drug, Zolinza (vorinostat), is working as hoped, and he’s busy studying other drugs to target HIV reservoirs.

Martin Markowitz
As the clinical director of his namesake lab at the Aaron Diamond AIDS Research Center in New York City, Markowitz and his team study several areas, including newly infected individuals and the role of the gastrointestinal tract.

Javier Martinez-Picado
The research professor at the AIDS Research Institute in Barcelona, Spain, studies how HIV causes disease in newly infected people; he also seeks to improve ARV treatment and reduce drug resistance, and he contributes to vaccine research.

Santiago Moreno
The professor of infectious diseases at the Alcalá de Henares University is also chief of the infectious diseases department of the Ramón y Cajal Hospital, both in Madrid, Spain. One of his studies suggests that HIV med maraviroc might have anti-reservoir activity.

James Mullins
The professor of microbiology, medicine and laboratory medicine at the University of Washington is working to find an HIV vaccine. He leads one of the two labs that did genetic analysis of the virus in the RV144 vaccine trial in Thailand, which showed some protection against HIV.

Una O’Doherty
She’s an associate professor of pathology and laboratory medicine at the Hospital of the University of Pennsylvania. She’s looking for the most accurate and practical methods for measuring reservoir size.

Marie-Capucine Penicaud
Responsible for research promotion at IAS, Penicaud was the “Towards an HIV Cure” project manager.

B. Matija Peterlin
The professor of medicine, microbiology and immunology is also the head of a namesake lab at the Department of Medicine at the University of California at San Francisco. Peterlin and his team study T cell responses at the molecular level and efforts to eliminate viral reservoirs.

Guido Poli
As an immunologist at the San Raffaele Scientific Institute in Milan, Italy, Poli and his team study how HIV affects T cells. He also coordinated the unification of several European and African cohorts of long-term nonprogressors into a single database.

Jean-Pierre Routy
The hematologist and researcher at the Research Institute of the McGill University Health Centre in Montreal, Canada, is working on studies using IL-7 or a therapeutic vaccine based on dendritic cells or chloroquine (a common anti-malaria drug) in addition to ARVs to knock out HIV.

Christine Rouzioux
At the virology lab of the Necker Hospital, the world’s oldest pediatric hospital, which is part of the public hospital system of Paris, France, Rouzioux explores treatment strategies that may lead to a cure, such as ARVs started during primary infection, continuous versus intermittent ARV therapy, CCR5 blocks, HDAC inhibitors like Zolinza (vorinostat) and immune-based therapies like IL-7.

Guido Silvestri
To better understand the pathogenesis of HIV—and thus advance cure research—Silvestri focuses on (non-chimpanzee) primates. But there’s a competing pool of resources, so he’s also working to get non-human primates dedicated to only cure research.

Mario Stevenson
The professor is chief of the division of infectious diseases at the University of Miami Miller School of Medicine. He also chairs the amfAR Scientific Advisory Committee. He studies the functions of viral accessory genes and mechanisms of viral persistence.

Carine Van Lint
She’s a professor at the University of Brussels studying the ways HIV works its way into the genetic material of CD4 cells and, in some cases, doesn’t budge, thereby hindering eradication efforts.

Eric Verdin
He heads the Laboratory of Molecular Virology at the Gladstone Institute of Virology and Immunology and is a professor of medicine at the University of California at San Francisco. His lab has focused on the mechanism of HIV reservoirs and on the immune modulators that inhibit HIV transcription.

Ann Woolfrey
A pediatric oncologist at Seattle Children’s Hospital, she specializes in bone-marrow transplants. She’s the lead investigator for many clinical trials of the Seattle Cancer Care Alliance, including a trial of a mechanism similar to one that cured Timothy Brown of HIV.

John Zaia
As the first endowed chair in gene therapy for the Department of Virology at the City of Hope Comprehensive Cancer Center, Zaia is developing gene therapies to treat HIV, cancer and other serious illnesses. In addition to his zinc finger nucleases work with “Hunter” Paula Cannon, he’s also working on stem cell research.