The POZ 100-The Soldiers 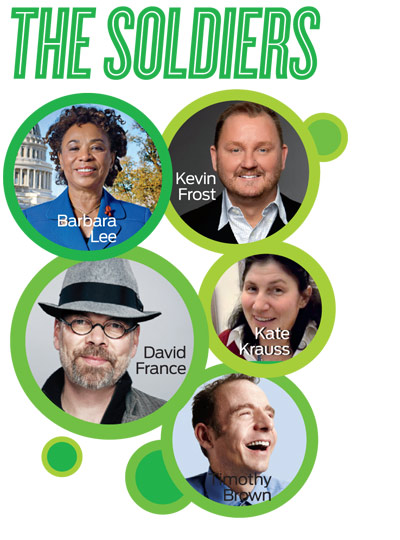 All wars—hot, cold and metaphorical—are won or lost on the front lines. The fight against HIV/AIDS is no different. Without the science—a cure, a vaccine and other biomedical prevention—the battle cannot be won. However, the science is only half the battle.

We’ll need leadership to get funding to implement those tools. We’ll also need legions of fighters to defend the dignity of people living with the virus, which includes a world without stigma and discrimination.

The 23 advocates, politicians and celebrities below are just a fraction of the countless souls across the globe doing the hard work of persuasion. They represent the many kinds of inroads needed to surround and suffocate HIV until it finally surrenders.

Bob Bowers
The HIVictorious Inc. founder (a.k.a. “One Tough Pirate”) was one of the most persuasive generals this year recruiting online for the POZ Army (pozarmy.com), a global grassroots collective of people fighting for the cure for AIDS and treatment for all until a cure is found.

Timothy Brown
As the first person cured of HIV, Brown (a.k.a. “the Berlin Patient”) represents a milestone in the AIDS pandemic. Although he could have chosen to live a quiet life, Brown has embraced his historic role. In July, he launched the Timothy Ray Brown Foundation to find a cure for HIV.

Gus Cairns
A jack of all trades, he’s a psychotherapist, counselor, journalist (he writes regularly for aidsmap) and a representative to the executive committee of the British HIV Association. Cairns is most interested in emerging HIV prevention technologies. Microbicides, PrEP, TasP—he’s a go-to thought leader regarding them all.

David Evans
As the director of research advocacy for Project Inform, Evans seeks to improve treatment, prevention and access to care, and to find a cure for HIV. The former POZ and AIDSmeds senior editor coauthored a report in March that outlines next steps for cure research.

Anthony Fauci
The head of the National Institute of Allergy and Infectious Diseases remains a key player in what HIV research gets federal funding, including the cure. So it was a big deal when Fauci said at the XIX International AIDS Conference “we can end the HIV/AIDS pandemic.”

David France
The director of How to Survive a Plague, an Oscar-worthy documentary about the early history of AIDS treatment activism, restored the stature of activists such as AIDSmeds founder Peter Staley and many others. The AIDS journalist and first-time filmmaker has inspired a new generation of activists.

Thomas Frieden
The director of the Centers for Disease Control and Prevention (CDC) has transferred many of the lessons he learned as the former New York City health commissioner. His once-controversial introduction of treatment as prevention and his advocacy for routine HIV tests are now mainstream.

Kevin Frost
The Foundation for AIDS Research, through its amfAR Research Consortium on HIV Eradication, is one of the major funders of cure research (and it is the home of many researchers on the POZ 100). As chief executive officer of amfAR, Frost is a key influencer of its priorities.

Jim Himes
Representative Himes (D–Conn.) this year introduced the Cure for AIDS Act (with Representative Barbara Lee, see below). The bill would fund research and development for an HIV cure by establishing a $100 million program within the Congressionally Directed Medical Research Program managed by the Department of Defense.

Richard Jefferys
This longtime AIDS advocate now works for the Treatment Action Group, serving as its basic science, vaccines and prevention project coordinator. He is well versed in the pathogenesis and immunology of HIV infection, and his blog is a go-to source for in-depth scientific discussion of those issues.

Elton John
In the past 20 years, the Elton John AIDS Foundation has raised more than $275 million. However, the legendary singer and songwriter isn’t resting on those laurels. Our cover guy also authored Love Is the Cure earlier this year, a memoir about his life in the fight against HIV. (Read an excerpt here.)

Kate Krauss
In her role as the executive director of the AIDS Policy Project, Krauss ensures that the organization advocates for HIV eradication research, secures funding for treatment and demands leadership on AIDS in Congress.

Stephen LeBlanc
Although his professional role as an intellectual property attorney takes up the majority of his time, his personal passion as an AIDS advocate gets plenty of attention through his position as an AIDS Policy Project board member. He has coauthored many reports on cure research.

Barbara Lee
Representative Lee (D–Calif.) has championed HIV/AIDS causes in Congress for more than a decade. In 2012, Lee introduced the Cure for AIDS Act (with Congressman Himes) and the Ending the HIV/AIDS Epidemic Act. In 2011, she introduced a sex-ed bill called the Real Education for Healthy Youth Act (with Senator Frank Lautenberg [D–NJ]) and the Repeal HIV Criminalization Act.

Kali Lindsey
His experiences as vice president of federal government affairs at NAPWA and senior director for federal policy at Harlem United have served him well as the director of legislative and public affairs for the National Minority AIDS Council.

Greg Louganis
Capitalizing on the opportunity of media attention during the 2012 Summer Olympics in London, the five-time Olympic medalist and current diving consultant used his moment in the spotlight to share his insights with CNN about living with HIV.

Jim Pickett
The director of prevention advocacy and gay men’s health for the AIDS Foundation of Chicago also wears another hat as chair of the International Rectal Microbicides Advocates (or IRMA, “the bottom line in HIV prevention”). Pickett is undeterred by subjects many would prefer to ignore.

Jamar Rogers
A fan favorite and semi-finalist on season 2 of the singing competition The Voice, he earned loyal followers on the show this year not only by singing his heart out, but also by sharing his struggles with overcoming addiction and living with HIV.

Paul Semugoma
This physician and vocal gay rights advocate in Uganda—a country not exactly known for embracing LGBT equality—mesmerized a standing-room-only crowd at the International AIDS Conference in July with a passionate call for providers and communities to acknowledge that LGBTs are everywhere and in desperate need of HIV prevention services.

Matt Sharp
The veteran AIDS activist has had numerous roles in the HIV community, especially as a treatment and cure research advocate. He’s also been in many clinical trials, putting his own health at great risk. His latest involvement—a gene therapy protocol for a cure based on the success of Timothy Brown—is perhaps his most daring.

Jeff Sheehy
The director of communications at the AIDS Research Institute at the University of California at San Francisco is a longtime activist for LGBTs and people with HIV. As a patient advocate on the board of directors for the California Institute for Regenerative Medicine, he helps keep curing HIV high on its agenda.

Sean Strub
The Sero Project, the latest effort by the POZ founder, promotes empowerment of people with HIV with a particular focus on ending inappropriate criminal prosecutions of people living with the virus. The impact of HIV criminalization on stigma, discrimination, testing and prevention cannot be denied.

Michael Tikili
Tikili and others, including veterans of the movement and newbies alike, were arrested in July during the XIX International AIDS Conference outside the White House demanding major changes to HIV policies. The young community organizer for Queerocracy and Health GAP certainly solidified his street cred.