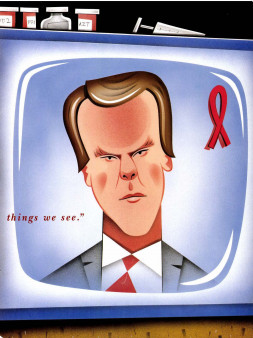 Since the beginning of the AIDS crisis, a large part of the fight against the disease has been an uphill battle to have the true scope of the pandemic shown in the media: The disease, its means of transmission, the search for treatments, the variety of people living with HIV and the discrimination they face. Reporting on AIDS has been scarce and frequently inaccurate. Virtually every major print or television news outlet has come under fire from AIDS activists for insensitive or sensational coverage of AIDS. Or for the shocking lack of coverage.

ABC News has avoided a lot of those protests—largely due to the perceived efforts of one man. “Peter Jennings has put himself out there for AIDS,” says Daniel Wolf, the acting director of communications at Gay Men’s Health Crisis (GMHC). “I would give him credit. He’s been the most visible newscaster on the issue.” And so he has, beginning in 1989 when he was tapped by PBS to anchor AIDS Quarterly, a series of AIDS specials, and then at his own network where in 1992 he hosted a program directed at children called Growing Up in the Age of AIDS. POZ’s Steve Doppelt joined Jennings in his office to find out just why the eloquent anchor has put himself out there for AIDS.
Steve Doppelt: Have you personally had any…

Peter Jennings: Friends with AIDS? Oh yes I had two women on my staff whose brothers both died. I know so many HIV positive people now it isn’t funny. But I came at it from a slightly different angle. I was asked to do a series of programs for public television. It was a pretty pioneering thing for them to do. They were very much ahead of everybody else in the media, in a conscientious way. We all did AIDS stories in the ‘80s, sort of the “scare you to death,” AIDS stories. In fact I’ve said before—and I still believe—that in the media we contributed to some of the very profound fear and resentment that people in the AIDS community had to suffer. But AIDS Quarterly was a great experience for me because the people in the program were so serious. They spent so much time on the science; they spent so much time on the human side of it. They really exposed me to a failing in our own coverage.

SD: A recent sex survey has been used to suggest that in America AIDS will never be a major epidemic beyond gay men and drug users.

PJ: When AIDS jumps into my mind, I don’t say “AIDS equals epidemic.” I tend to break it down more. I think of AIDS: Social burden, scientific burden, financial burden, community burden, individual burden. I tend less to think whether 5,000 people are affected or 50,000 people are affected, except in terms of the weight that is brought to bear on those various components. And I do think that the word “epidemic” is one of those words that is overused in America and therefore loses its impact, rather like the word “hero.” Everybody’s a hero.

SD: Hasn’t it been courageous of you as a newsperson to devote so much time to AIDS?

PJ: I’ve never quite know what to say to that because the truth of the matter is that even though AIDS struck most viciously at the gay community in the early stages—and was therefore seen to be a delicate area—I never thought of it very much like that. I was well-educated early on to realize that any disease in the country is a disease affecting all of us. That was easy to see in the early stages if you thought for two minutes about how quickly the disease might spread, and where it might spread. So, to be honest with you, I think that I got, or we got, a little more credit for being sympathetic or compassionate or understanding of the crisis in the gay community than we deserve.

SD: But certainly there are people out there who were—and still are—less enlightened, who would maybe pass judgment on you: “Why is he doing AIDS?” Did that ever concern you?

PJ: No. Quite often when the gay community took umbrage at the established media they excused ABC from their protests and demonstrations. Again, I’m not sure they were always right to do so, but they did. I’ve always believed that if someone is determined to complain about you, that you should not only listen to them outright but encourage them. So, often when people would come to demonstrate outside, I would go and see them. And I think that helped me learn even more and may have led people to think that we’re fairly open. I do think we’re open. I think that I’m always, at least I hope I’m always, open to learning. It’s not my job here to be making judgments about people’s lifestyles, whether I approve of them or not. And I have some very strong views about people who are HIV positive knowingly putting other people at risk. I have very strong views about bisexual men who knowingly put women at risk. I am profoundly offended by this. We did one of the AIDS Quarterlys on this and there was quite some concern in the shop because my anger was showing. And I said, “Fine, let it show.” It’s not like me to let my emotions show. I guess it’s the way I was raised.

PJ: If it’s too personal I won’t answer it.

SD: Have you been tested?

PJ: I won’t answer that question.
SD: Is the backlash that AIDS activism is getting too much…

PJ: No. No, sorry, I make a lousy journalistic subject in that regard.
SD: So it’s more of a composite…

PJ: It’s a very complicated learning process. I don’t think that AIDS is something you can just go out and encounter and understand.

I remember the first time I ran into a needle exchange program: It just seemed to me on the one hand so frighteningly foreign that we should in any way be encouraging drug use and, on the other hand, so absolutely commonsensical that we not put people at even greater risk. And it’s interesting to watch now how society’s slowly—in some parts of the country—very slowly accepting the notion that needle exchange is better than nothing. What I don’t think is that we see much of is the face of AIDS in its final stages. It’s not something we would comfortably put on television, but I often wonder how the country will react if it ever does become familiar with the final stages.
SD: Do you think that is close to happening?

PJ: No. But I don’t think that’s prejudice necessarily. There’s quite a strong resistance in America to exposing our audiences to real violence. We seem much more willing to expose the audiences to prime-time violence than to the extent of violence as we see it as journalists. We tend to… we do sanitize some of the things we see.
SD: What about situations where reporters know that a public person died from complications of AIDS, but efforts are made to keep that private?

PJ: Are you asking the Arthur Ashe question? I would never have reported Arthur Ashe’s illness. Never. I thought it was utterly irrelevant to the public. He was outed. There’s no question about it. Again, my background, I think, has imbued me with a stronger sense of privacy than certainly some other people. [Laughs.] But I just don’t see any social benefit in it. I don’t see any social benefit in identifying people who are HIV positive.
SD: There are people out there who would say that when someone discloses his or her positive HIV status, it reduces a shame or a stigma that goes with it.

PJ: Oh, I think it does. I think very much so. We all have very clear images in our minds about what makes up your average person in the fullest sense. If one of those average people—one who fit the mold—were HIV positive, and it were deemed to not necessarily be an aberration in this average person, then I think it might add to public [education]. I think the discovery of how extensive homosexuality is in the country has gone some way toward helping the broadest group of Americans understand that this doesn’t just happen to “effeminate guys.” And I think that’s helped the public acceptance or public understanding of homosexuals. But that is not the issue so much. The issue fore as a journalist is: If the senator in question were to believe that losing his privacy, or her privacy, would contribute to greater understanding and lessening of all the phobias that people do have about this… But that would be their choice. I don’t want to make those judgments for other people. And that’s why I think the Ashe case stands out so significantly—because he never had the choice to make that decision for himself. And he, above many, many people in the country, would have understood the value of public identification with something. And, as it turns out, Arthur’s astonishing commitment to education made a big difference.
SD: What if, say Hard Copy comes out with something like this? Do you air it?

PJ: One of the other programs? Oh no, no, of course not. No. that’s not a problem for us. I mean some things are a problem: Gennifer Flowers and the President were a problem for us. We were swept along much against our will into that political maelstrom. But if Inside Edition or Hard Copy or Geraldo or any one of those programs were to merely say “X” is HIV positive, and it were deemed by us not to be relevant to our public, there’s no way it would get on our air. There’s no way we would be pressured by another program like that to put it in our broadcast. I think it would get around—no question about that. I mean, there are no gatekeepers anymore. And we realized that with the Gennifer Flowers story. But, no, I don’t think we succumb to that kind of pressure.
SD: Do you see AIDS as a special story?

PJ: Not now. I did. Several years ago I did think this was very special and was not being well reported on and said so publicly at the time. I felt very strongly we should do much more responsible reporting than we or, for that matter, a lot of other people were doing at the time. Now I think we do a good continuing job. Clearly, neither as much nor as comprehensive as the AIDS community would like, but I think we do a good continuing job. It’s no longer an absolute “I’ve got, we’ve got to do this” thing.