Mixed Messages on Meds and Booze

Many skip their HIV meds when they drink. Here’s why this is a mistake. 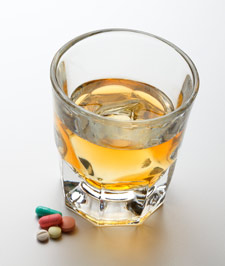 In the ongoing struggle to improve adherence to HIV medications, alcohol has long been an obvious crux standing in the way of progress. Brian Risley, manager of the treatment education program at AIDS Project Los Angeles, says some of the common refrains he hears from his HIV-positive clients are, “They got drunk, they forgot to take their meds; they went home with somebody and they didn’t bring any meds with them.”

Now cutting-edge research has teased out a new component of booze’s detrimental effects on health outcomes: the fact that many people with HIV skip their meds on purpose when they are drinking because they falsely believe that antiretrovirals (ARVs) and alcohol are a toxic mix.

A team from the Department of Psychology at the University of Connecticut studied 176 HIV-positive Atlanta residents who were taking ARVs and who drank. The group was predominantly male and African American, averaging about a high school education. After interviewing the participants about their beliefs surrounding the supposed hazards of drinking while on ARVs, the researchers monitored their medication adherence, alcohol intake, viral load and CD4 count over a yearlong period.

A stunning 51 percent of the participants reported that when they drank they skipped their ARVs—for a variety of reasons. Some of them would only skip one dose, while others would stop their medications in advance of drinking and wait until the alcohol was cleared from their bodies to start up again.

Richard D. Moore, MD, director of the Moore Clinic for HIV Care at Johns Hopkins Medicine, reports observing this phenomenon among his patient population. “We think it’s unfortunate,” he says, “that patients who are going to be drinking over the weekend would say, ‘Well, since I’m going to do that, I shouldn’t take my antiretroviral medications.’ We encourage adherence to our antiretroviral medications no matter what.”

While the study’s authors state in their paper, which was published in the Journal of General Internal Medicine, that their cohort is not a representative sample of the general HIV population, previous studies have also reported that as many as half of people with HIV who drink alcohol skip their meds on purpose when they’re drinking.

Most notably, this study proves for the first time that purposefully skipping ARVs when drinking is a significant source of the non-adherence problem in the United States. It also shows that faulty beliefs about the danger of mixing alcohol and HIV medications not only significantly motivate people to skip doses, but that these beliefs are actually a greater predictor of non-adherence than alcohol use itself. All of this is particularly troubling given the fact that those who skip medications put themselves at risk for treatment failure.

To these effects, those study participants who held the faulty beliefs were much more likely to fall into the 51 percent who skipped medications while drinking. And those who skipped were significantly more likely drop below a crucial rate of 85 percent adherence, to have detectable viral loads and to experience CD4 counts below 200—all factors that could seriously jeopardize their health.

Robert Gross, MD, an HIV specialist who is a professor at the University of Pennsylvania Perelman School of Medicine and a clinical researcher at the Philadelphia VA Medical Center, says that the misconceptions about booze and HIV meds are likely an extension the early- to mid-20th century era when barbiturate use was common in the United States. These drugs, also known as downers, can be fatal when taken in combination with alcohol, so there was a big push in those days to warn people about the harms of mixing substances.

Seth Kalichman, PhD, a professor of psychology at the University of Connecticut and the study’s lead author, says, “It appears people have generalized the message to their antiretrovirals, although there really is no indication that they shouldn’t be mixed [with alcohol]. With a really big exception: people who have liver disease, including hepatitis C, [for whom] the combination of antiretrovirals and alcohol can actually be very dangerous. They really should not be drinking, period. But, those folks aside, the harm of missing antiretrovirals clearly outweighs the harm of taking antiretrovirals with alcohol.”

Risley, of AIDS Project Los Angeles, reports that many of the clients in his group for newly diagnosed people with HIV ask him questions about drinking.

“They think that their liver can’t handle the HIV meds and the alcohol,” he says. “Basically what I tell them is you’re not competing for the same metabolic pathways that break it down. So you don’t have to worry about it. But, like anything else, you want to try to drink moderately.”

However, some HIV medications do indeed have side effects that make combining them with alcohol inadvisable. But instead of coming to conclusions on their own, people with HIV should discuss the subtleties of their individual drug regimens with their doctors or nurses, Kalichman says. (Pharmacists are also a good source of information about drug-drug reactions of any kind, including in regards to alcohol and street drugs.)

But surprisingly, more than 80 percent of the study’s participants reported that their health care providers had specifically instructed them not to mix ARVs and alcohol, while only 65 percent stated that their providers actually engaged them in a discussion about alcohol use.

In these cases, misinformation and missed opportunities for effective harm reduction appear to be the true toxic mix.

“I think that doctors and nurses and health care providers can be more clear in their communications,” Kalichman says. “I’m sure it’s very common for providers to tell patients, ‘Now, if you’re going to be starting these antiretrovirals, one of the things that you shouldn’t do is drink.’ And that’s good advice. Because drinking is not healthy to begin with. And also, drinking is a really strong predictor of non-adherence. But what some of these participants are hearing is, ‘Don’t drink when you’re taking these medications. So when you start drinking, stop the medications.’”

Risley says that a more nuanced harm reduction message is needed and that it could be promoted by anyone in the HIV field, including psychosocial case managers, nurses who handle HIV caseloads, and even community education groups that participate in health fairs.