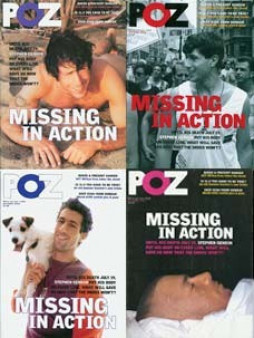 At first, they seemed just run-of-the-mill awful—even familiar to PWAs from earlier days: Butt-cheek-chapping diarrhea. Room-rocking nausea. Pins-and-needles neuropathy and muscle-aching myopathy. But a year or so into the protease revolution, things turned weirder. Not just kidney stones and through-the-roof cholesterol but bizarre fat deposits in the belly (“protease paunch”) and shoulders (“buffalo hump”) or fat loss in the limbs or face (“puppet cheeks”) soon to be known collectively as lipodystrophy—“the new AIDS look,” as POZ sardonically dubbed it. What med-linked malady could be worse? Try a Sustiva (efavirenz) nightmare or hallucination.

By 2000, such laments had become daily topics of conversation for HIVers, who debated the high price they were paying for lab-number “health.” Describing her neuropathy in POZ’s September issue, New Yorker Lillian Anglada said, “You can stick a pin in my leg below the knee, and I won’t even feel it.” That cover story profiled HIVers coping with everything from the runs to heart and liver hurts—all of it linked, however dimly, to the treatment that was keeping them alive. Beset by nerve and muscle damage, Anglada found some relief through acupuncture, but the myopathy left her half-confined to a wheelchair.

Four years later, the side-effects scene has brightened a bit—Zerit (d4T) has been fingered as the lead culprit in “puppet cheeks” and such promising tools as New-Fill can treat them. Last year the FDA approved Reyataz (atazanavir), the first protease inhibitor that doesn’t boost cholesterol and other lipids. A wide range of vitamins and herbs have emerged as little helpers in controlling some of the worst side effects. And we’ve learned that drug holidays can grant blessed breaks from the drama. Still, side effects remain the primary reason HIVers ditch their meds.

Shortly after POZ profiled Anglada, she said sayonara to her HAART combo for a year. The feeling in her hands and legs, she says, “all came back in five or six months.” Eventually, she went on Trizivir alone, which she’s taken with no complaints since. A good thing, too, now that she’s running her own AIDS group serving Spanish Harlem, where she lives with her sister. Anglada has held onto the hated wheelchair she stood beside with difficulty—and defiance—in a POZ photo four years ago. Why? “To remind me,” she says.

Man of the Year: Stephen Gendin

When Stephen Gendin died in July 2000, POZ marked the loss by publishing four different cover shots of him—from sexy Stephen bare-assed on the beach to dead Stephen on a gurney. The covers were inspired by Gendin’s own genius for “shocking” self-revelation, but also acknowledged that we could never quite define this flaming mystery in our midst. Diagnosed at 20 in 1986, the ACT UP veteran and business partner of POZ founder Sean Strub was a beloved activist leader—storming barricades at protests; writing the first issue of ACT UP’s seminal Treatment and Data Digest; and spearheading prevention activism with groups like Sex Panic! But it was his in-your-face writing in POZ that won Gendin near-mythic status as the über-PWA, fearless in his lust for life but exhilaratingly honest about the horrors of HIV.

Gendin detailed his every symptom and sin in loving detail, from dry skin (“the top layer disintegrated into a powder”) and diarrhea (“I had to creep around the parking lot, searching for scraps of paper to wipe myself”) to barebacking (“membership has its privileges” he infamously wrote) and infecting his lover, Kyle “Hush” McDowell (“one of the few things in my life that I’m deeply ashamed of”). A self-proclaimed “HIV positive Evel Knievel,” he once wrote, “I push myself to extremes…to knock me down and drag me into a place where I see the meaning of life.” Gendin was also staggeringly informed and entered every clinical trial he could, burning through new drugs so fast that by the protease dawn, he was a salvage case (“the pariah at the party” he wrote). All the while, he seduced even those he outraged with his quirky charisma: Despite a six-foot-two humpy frame and megawatt smile, he could be shy and boyish: wearing the same clothes for days and obsessing over superhero comics.

Gendin’s death at 34 from the treatment for HIV-related lymphoma seemed particularly unjust: While many marquee activists had retired from the fight, Gendin ran flat-out to the finish. Hundreds came to his funeral, reuniting old-guard ACT UPers. More moving to Gendin would have been his legacy for countless POZ readers. “When I tore open the wrapper of my October 2000 POZ,” wrote Steven Smith of Ashton, Illinois, “I cried for Stephen Gendin’s death. Not just a sniffle of empathy, but shaking sobs. I only knew Stephen from the pages of POZ, but even from this distance I realize that we’ve suffered a loss that won’t be replaced.”

When I tested positive, in 1992, I was certain I’d be dead by 30. I saw a graph that showed that the average length of time from infection to death was 10 years. I knew I’d gotten HIV two years earlier, at age 20. With that “fact” in mind, I put off furthering my education and career. Why take out more student loans, I thought, when I’m never going to use my degree?

When 2000 arrived, and I had actually made it to 30, the graph that had haunted me for eight years began to fade. Soon after my birthday, I left the academic administration job I had held since testing positive and pursued my passions: I got a job doing outreach work at an HIV community center and went back to school for a master’s degree in public health. Now I do behind-the-scenes community planning at the Boston AIDS Consortium.

I recently met a Wellesley student who was infected young, like I was. Her experience was so different from mine. She immediately got involved with a group of young positive women and is already surrounded by a community of people like her. It’s that kind of progress for people with HIV that makes me look forward to my next 30 years.

Beth Hastie has been a contributing writer for POZ since 2000.

As in: non Western treatments for HIV. Also as in: non-HIV theories about the cause of AIDS. The mid-’90s arrival of HAART marginalized reserachers and activists who dispute that HIV is the single agent of AIDS—until 2000; South African president Thabo Mbeki stunned the world by embracing AIDS denialists. In the U.S., two new books pinned AIDS on causes other than HIV alone. A POZ article admiringly called HIV skeptic Celia Farber “The Most Dangerous AIDS Reporter.” And POZ’s April cover, “Alternatives 2000,” reminded HIVers not to neglect herbs, vitamins and other alt therapies.

January
An alarmed AIDS media, including POZ, reports the first conclusive case of an HIVer being “reinfected” with a second strain of the virus—but by fall 2001, independent researchers find “insufficient evidence.” To date, three cases have been verified.

March
The 1990 Ryan White Care Act comes up for congressional renewal. Right-winger Rep. Tom Coburn demands an audit of HIV programs, but turns up nothing untoward. Ryan White is renewed with funding increases.

April 30
The Washington Post reports that the Clinton administration has classified AIDS as a national security threat. After 9/11, the policy helps justify overdue international HIV-relief efforts.

July
At the 13th International AIDS Conference in Durban, South Africa—the first to be held in the developing world—access for all to meds, and not a cure, emerges as priority No. 1.