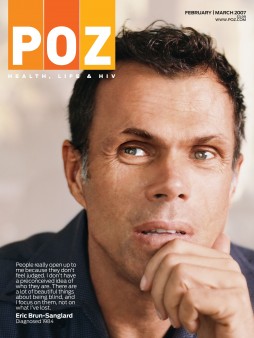 Eric Brun-Sanglard, an HIV positive interior designer, lost his sight 11 years ago. But when he got his own reality TV show, his future became crystal clear.

(Click our audio player below to hear the audio version of this story, read to you by John Thompson, and please pass on this link (https://www.poz.com/audio/the_view.mp3) to anyone you know who’s lost vision to CMV.)

A-list interior designer Eric Brun-Sanglard stands before his newest clients, a young California couple in love. They hate the color of their living room walls and have come on his reality TV makeover show desperate for guidance. But first, he must—sight unseen—get a sense of the offending shade. The sweet duo does their best to describe it—but Brun-Sanglard, 44, finally hands them cards that list thousands of colors. Poring over them, the couple finds the precise hue, but they don’t tell him the name—only the percentages of magenta, yellow, cyan and black that form it. Without missing a beat—and with a soft-spoken humanity that counters the stereotype of the bitchy TV tastemaker—Brun-Sanglard identifies the culprit: mustard! In choosing its replacement, he doesn’t merely suggest whatever hot new shade he prefers at the moment. Brun-Sanglard sits with the couple, quizzing them about their habits and passions, all aspects of their personal life. While chatting, he uncovers their shared obsession with Hawaii and the tropics. Aloha—a soft blue it is.

When the French-born Brun-Sanglard first encountered the duo, he walked around their living room, cameras rolling, running his fingers along the bricks of the fireplace and caressing the worn fabric of their sofa. Tall and broad-shouldered, he spreads his arms to get a feel for the width of the windows. “We have a lot of work ahead of us,” he says with a kind chuckle. Then, based on this tactile diagnosis, he leads the couple on a madcap shopping trip. They are simply staggered by Brun-Sanglard’s extrasensory ability to read their living space and understand the complexities of their lives. (The woman, in fact, is nearly brought to tears.) They almost forget what most people tend to realize about him as soon as they meet him: He is blind. But as he presides over their stylistic rehabilitation, as he has with so many other clients on the A&E network’s Designing Blind, he can detect that the space expresses aspects of the couple’s personalities they didn’t even know existed.

Brun-Sanglard, who was diagnosed with HIV in 1984, lost his sight 11 years later, after contracting the cytomegalovirus (CMV). It’s found in 50% to 80% of U.S. adults under 40, according to the Centers for Disease Control. Typically, it stays in the body for life, usually without symptoms. But in unborn babies and people with weakened immune systems, CMV can cause blindness. Brun-Sanglard sports dark sunglasses, like so many of his fellow Los Angelenos, and walks closely beside his design partner when he steps into TV clients’ homes; couples at first have no idea that he’s blind. They often muscle back looks of shock when they realize that the person who’ll be redecorating their home can’t even see.

He doesn’t immediately disclose his HIV status on the show, and the program’s website doesn’t mention it. “My producer [didn’t] want me to be the ‘HIV positive designer,’” Brun-Sanglard says, adding that he agreed to omit his status when he realized that he wasn’t being asked to hide it. “It wasn’t like I couldn’t talk about it at some point, but they didn’t want me to be labeled, and I agree,” he says. In a society that still stigmatizes those living with HIV, the combo of an HIV positive, blind, gay interior designer might seem shocking. But for Brun-Sanglard, it’s simply reality, a duality of illnesses that has shaped who he is today. It has also meant a life of reliance and trust. “Sometimes I have hard days, where I miss being able to get in my car and go somewhere,” he says.

But on his best days, Brun-Sanglard—who, as a friend once put it, is “the only person who doesn’t know that he is blind”—is determined to design every aspect of his own life. “[Eric] didn’t shrink the vision for his life around his circumstances,” says another friend, Steve Maher. “He continues to aspire to things that are completely illogical.” Like skiing last year in Utah (he skis in front of or behind someone else and depends on sound to sense the terrain). Brun-Sanglard has also traveled the world, from Bali to Costa Rica, and returns yearly to Chamonix, France, to visit his parents and siblings. His blindness hasn’t impeded his HIV care either: He keeps his meds on a tray, dosed by day and time, so that he can feel for and take them on his own. “I’m very proactive in my medical care, and my health is very good,” he says.

Brun-Sanglard says that having HIV lessened the emotional severity of losing his sight. “I had prepared myself to die, so being blind wasn’t an issue.” His illnesses overlap when it comes to disclosure. He’s single, but when he goes on dates, which he does with some regularity, he often can’t separate one revelation from the other. “People always ask how I lost my sight,” he says. He has also displayed other symptoms. Three years ago, friends noted that his face was sinking from med-side-effect lipoatrophy. “I kept feeling my face, and it felt so hollow,” he says, adding that he got facial-filling injections.

Around the time Brun-Sanglard, a former perfume industry ad executive, began to lose his sight, he was remodeling his house, hoping to sell it. “I was extremely sick so I wasn’t working any longer.” With his then boyfriend, he finished the home. “I sold it and bought two other houses from the proceeds,” he says. “My ex-boyfriend was in charge of construction, and I was in charge of design. We did one house, then another, and it became a business.”

In 2005, he decided to grow that business by pitching a TV show; A&E started filming in 2006. “I try to change the people as much as I change their places,” he says, by unearthing the reasons that make people hold on to their tacky furniture and ugly carpets. The client response has been overwhelmingly flattering. “Eric has a gift for what he does,” says a client from the first season, Jason Broad, of Los Angeles. “And I’m sure that if he could see, he’d still have [that] gift.”

Brun-Sanglard elaborates: “There are a lot of beautiful things about being blind. People open up to me because they don’t feel judged,” he says. Close friend Lois Bonfiglio says that Brun-Sanglard’s optimism makes him as good a friend as he is a businessman. “Eric is very clear about what he likes and what he doesn’t like. He has opinions,” she says. “The strength of his personality has overcome what would have been, in anyone else, the end of a productive life. Eric took it on as a challenge.” Like so many other positive people, he’s feeling his way through life. 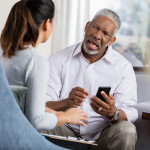 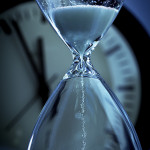 Even When Well Treated, HIV Is Linked to Advanced Aging 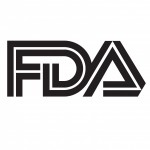