KABC entertainment Reporter Karl Schmid came out as HIV positive on Instagram in March…and an activist was born. Courtesy of Karl Schmid

Hollywood reporter Karl Schmid didn’t think coming out as HIV positive on Instagram would make any waves. But social media had a surprise for him.

“Don’t do anything stupid tonight,” Karl Schmid’s best friend, Chris Bair, said to him one Friday night in March as he was leaving Schmid’s West Hollywood apartment.

It was just a joke between chums, a teasing suggestion that Schmid might bust out and go wild in WeHo without Bair to keep him in check.

“I’m going to bed!” replied Schmid, ever the good boy.

But before he turned in, the 37-year-old Australian-born television entertainment reporter wanted to post on Instagram a picture taken of him earlier that day. In the shot, Schmid’s dashingly handsome face wears a “who me?” bashful smirk and a cocked eyebrow while a T-shirt emblazoned with the logo of the AIDS Memorial Instagram account hugs his sturdy, muscular frame.

At that late-evening moment, Schmid, who patrols red carpets for an KABC, the ABC network’s owned-and-operated station in Los Angeles, wasn’t thinking about much more than the fact that he wanted to share a cute pic of himself. (Who, him?) But since the photo had him sporting HIV-themed garb, on a whim he decided to say something in his post about how he had been living with the virus for 10 years, a fact that at that moment remained unknown to anyone at his job or in the general public.

Schmid, who has a disarming knack for genuine self-deprecation, typed into his phone, “I may be on TV from time to time, but at the end of the day I’m just an average guy who wants what we all want. To be accepted and loved by our friends and family and to be encouraged by our peers.”

He clicked “post” and went to sleep, figuring that only some friends and a handful of other followers would read his remarks.

Hi. I’m a 37 year old HIV+ man who has been poz for almost ten years. I work in television. And on the side of the camera where, fo better or worse it’s considered “taboo” for people “like me” to be “like me”. For 10 years I’ve struggled with “do I or don’t I”? For ten years the stigma and industry professionals have said, “don’t! It’ll ruin you”. But here’s the thing. I’m me. I’m just like you. I have a big heart and I want to be loved and accepted. I may be on TV from time to time, but at the end of the day I’m just an average guy who wants want we all want. To be accepted and loved by our friends and family and to be encouraged by our peers. So here’s what I say, stand tall, and stand proud. You can’t make everybody happy but you can make you happy. And so long as you tell the truth, you will never have to remember anything. Labels are things that come and go but your dignity and who you are is what defines you. I know who I am, I know what I stand for and while in the past I may not have always had clarity, I do now. Love me or hate me, that’s up to you. But, for anyone who has ever doubted themselves because of those scary three letters and one symbol, let me tell you this, you are somebody who matters. Your feelings, your thoughts, your emotions count. And don’t let anybody tell you otherwise. I’m Karl Schmid, and I’m an HIV-positive man! #whatisrememberedlives @theaidsmemorial @theaidsmemorialtshirt Sent from my iPhone

The next day, Schmid showed Bair his Instagram and said, “Did you see what I did?”

“I told you not to do anything stupid!” Bair exclaimed.

A couple of days later, after People magazine’s website picked up Schmid’s public declaration and turned him into an instant hero in the HIV community, Schmid sat with Bair in his friend’s kitchen, both men in tears as they read comment after effusive comment on his social media pages as well as a flood of private direct messages. Complete strangers from all over wrote to congratulate Schmid, to express gratitude for inspiring them, to share their own stories of living in secret with HIV or other chronic health conditions.

One HIV-positive man in his late 60s wrote to say his partner had recently died, leaving him feeling alone, with no one else in the world knowing he was living with the virus. He thanked Schmid for giving him the opportunity to be open about his HIV status with him.

“I kept going, ‘My goodness gracious me,’” Schmid recalls of his stupefaction over the overwhelmingly supportive and laudatory feedback.

“I had no idea there were that many people out there hurting or hidden who felt that way,” says Bair.

Schmid reports that his cohorts at KABC, a division of the Disney empire, were similarly supportive. He’s keen to praise the corporation (which recently canceled the successful Roseanne reboot following Roseanne Barr’s racist tweet) as an affirmative place to work. One of Schmid’s colleagues expressed particular concern over the possibility that anyone in the company might have discouraged him from being open about having HIV. 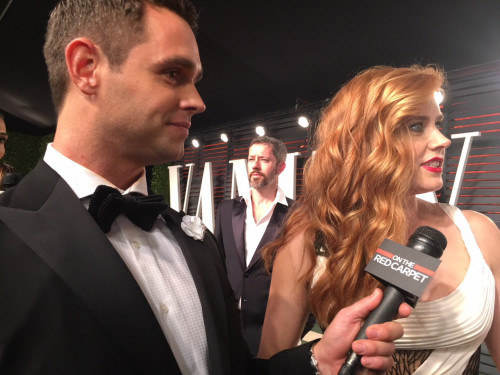 Schmid chats it up with Amy Adams at the Vanity Fair Oscars party.Courtesy of Karl Schmid

Schmid says people at his job didn’t know his HIV status not because he feared they would react negatively to the news or because anyone pressured him to stay quiet, but, as he says, “Who gives a shit? [HIV] doesn’t affect my work. It has nothing to do with what I do on camera or off camera.”

That said, Schmid says he knows a handful of people in his professional arena who work in front of the lens “who dare not talk or disclose their [HIV-positive] status. And I totally understand why: because of this fear and this stigma.”

A child of the screen comes of age

Schmid got his start in children’s television in New Zealand and spent much of his young adulthood as a personal assistant to the performer Barry Humphries, aka the venerable Dame Edna Everage. Following a TV reporting gig in London, he’s been working in LA for nearly 10 years now, both on camera as a host and correspondent and as a producer. 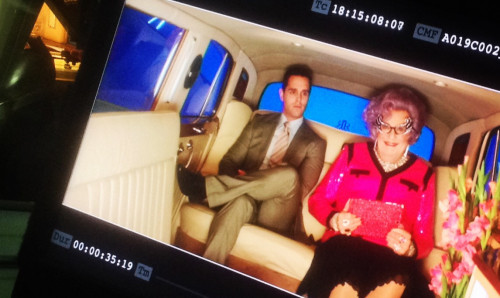 A demoralized Schmid overshadowed, yet again, by Dame Edna’s glamourCourtesy of Karl Schmid

Asked to reflect on her former assistant, the irrepressibly charming Dame Edna was unbridled in her praise. “He helped me redecorate one of my homes, and he had a particular penchant for red carpets,” she wrote of Schmid in an email, her bedazzled cat-eye spectacles no doubt sparkling and her wisteria-hued bouffant surely glistening as she typed. “I think that influenced his career choices, but I knew he’d go a long way. He’s clever, nice looking and, best of all, funny, and he never stole anything of value.”

“All I can say is, ‘Wow!’” was Schmid’s reaction to the flattery.

Between 2013 and 2014, Schmid also hosted a travel show on Logo TV, a natural fit given his penchant for international adventure. The Melbourne-area native has jaunted all over the world, often with Bair as his travel buddy, in an effort to appease his restless soul. (He also smooths out his rough edges through daily transcendental meditation.)

“I like to go to places that make me slightly uncomfortable,” Schmid says, “because I think that’s the brilliance of traveling: to go to places where you really are different and everything is foreign. That’s what brings out the best in people.”

“He pushes me to do things that I would not normally do and expand my horizons,” Bair says of his friend. 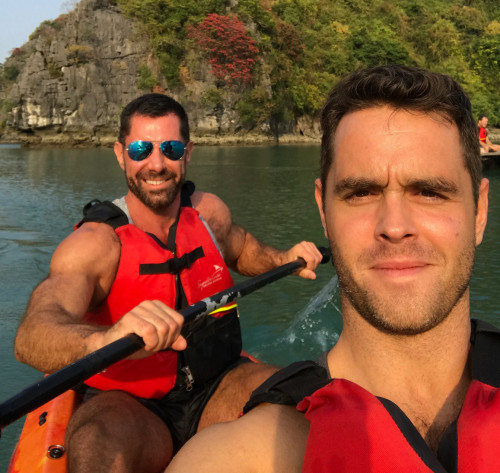 An awards-season reporter pushes the envelope in La-La Land

Embarking on a new phase of total openness about living with HIV, Schmid acknowledged, is in keeping with his eagerness to push his personal boundaries. That said, being transparent about his HIV status has saddled him with painful challenges in the past. He recalls years of struggling over the conundrum of when to disclose his HIV status to guys he’s gone out with: Bring it up too early and they might react with horror that he was dropping a bombshell on the first date; bring it up too late and he risked their becoming incensed that he’d kept a secret.

“I’ve had a drink thrown in my face,” he says of telling a date that he’s HIV positive. “I’ve had people turn against me.”

Regarding the third degree that HIV-negative gay men often subject other guys to on dating and hookup apps, specifically their common use of the stigmatizing question “Are you clean?” Schmid says his typical response is a flippant, “Yeah, squeaky. I shower twice a day.”

You heard that right, gentlemen: This handsome, “safe, sane and single” bloke is a super-hygienic catch.

As for his health, Schmid is happy to report he’s never been better. He even feels that contracting the virus has “almost done me a favor because I go to the doctor two or three times a year.”

“I wake up in the morning and I feel fit. I look in the mirror and say, ‘I don’t look too bad for someone who’s turning 38 in a couple of months,’” Schmid says. “And I also don’t think about HIV on a daily basis. I take my tablet in the morning along with my multivitamin pill, and that’s it.”

Schmid is keenly aware of the considerable body of research supporting the Centers for Disease Control and Prevention’s recent conclusion that someone such as him who boasts a sustained undetectable viral load thanks to HIV treatment has effectively no risk of transmitting the virus. He hopes that HIV-negative gay men will develop a greater appreciation for this science and that their fear of and dismissive attitudes toward their HIV-positive brothers will wane as a result.

He’s eager to help move the needle on HIV stigma in his newfound role as a public face of gay men living, and thriving, with the virus.

“If people don’t get sick of me straight away and are willing to keep listening to me and putting me out there,” he says, “then I will gladly keep banging that drum to really end the stigma. Because it has to stop—it’s killing people unnecessarily. It’s just so damaging and so wrong and so stupidly unnecessary.”

And so he’s off to add his voice, and a touch of Hollywood glamour, to the International AIDS Conference in Amsterdam next month—where, with any luck, he won’t do anything stupid. 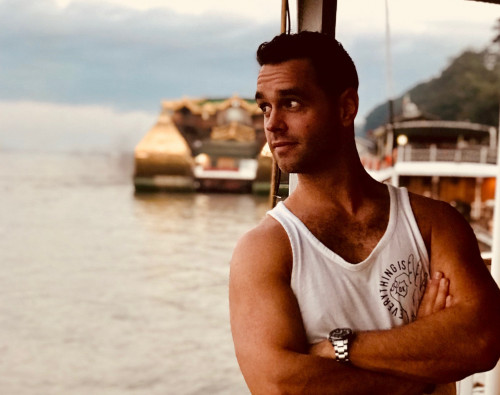 Editor’s note: a previous version of this article incorrectly referred to KABC as an ABC affiliate, rather than a station owned and operated by the network.