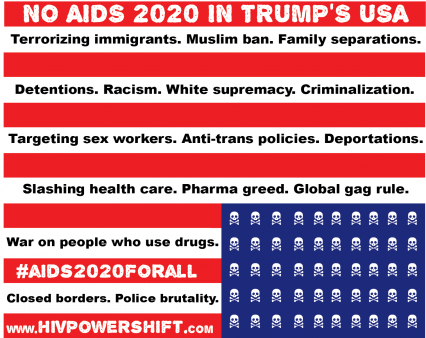 A “No AIDS 2020 in Trump’s USA” sticker design Courtesy of AIDS2020ForAll.org

Why Activists Want the 2020 AIDS Conference Removed From the U.S.

Trump’s America is no place for the 2020 International AIDS Conference (AIDS 2020), say more than 60 U.S. human rights organizations and 11 population groups, including the Global Network of People Living with HIV, the HIV Youth Leadership Fund, the International HIV/AIDS Alliance and the Positive Women’s Network–USA (PWN-USA, which authored a press release on the topic).

In March, the International AIDS Society (IAS), which oversees the AIDS conferences, announced that AIDS 2020 would take place July 6 to 10, 2020, in San Francisco, marking 30 years since the city hosted the conference.

The international AIDS conferences are held every other year. AIDS 2018 is taking place this week in Amsterdam.

Calling contemporary United States a “hostile environment,” advocates are asking IAS to “immediately announce [its] decision to relocate the conference.”

“The decision to bring the International AIDS Conference to the U.S.A in 2020 reflects a gross disregard to the expressed requests of gay men, people who use drugs and sex workers that the conference be hosted in a country where our participation is possible,” said George Ayala, the executive director of MPACT Global Action for Gay Men’s Health and Rights in Oakland, California, in the release. “Further, the choice of the Bay Area, literally one of the most expensive places in the world, underscores a growing divide in the AIDS movement between the public health elite and community advocates.”

During AIDS 2018 in Amsterdam, Ayala spoke at a press conference about moving AIDS 2020. You can watch that video above.

Recalling the 2012 conference, held in Washington, DC, the press release notes that although at the time the nation provided a more supportive environment, alternate conferences had to be organized outside the United States for sex workers and people who use drugs because they weren’t allowed in the country.

“No act of goodwill from the IAS, its network, or even individual members of U.S. Congress can ensure visa approvals. Nor can they prevent detention, interrogation, intimidation or exposure to violence and harm once in the U.S.,” said Naina Khanna, executive director of Oakland, California–based PWN-USA, said in the release. “We have a statement [that] organizations and individuals are signing onto in droves available at bit.ly/AIDS2020SignOn. We are asking IAS to meet with concerned members of civil society here in Amsterdam so we can partner with them to help move this important biannual conference so it can be truly accessible for communities most affected by HIV.”

POZ Poll: Should the international AIDS 2020 conference be moved out of the U.S.?

Yes. Move the conference out of the U.S.

No. Hold the conference in the U.S. as planned.