Is the global HIV community experiencing irreconcilable differences? When it was announced in March 2018 that the next International AIDS Conference, known as AIDS 2020, would take place in San Francisco and nearby Oakland, the pushback was swift. Global HIV activists penned a letter to the International AIDS Society (IAS, which organizes the conferences) and demanded the event be moved off U.S. soil because “those most affected by HIV within and outside of the U.S. are, at best, excluded and, at worst, put in harm’s way by holding the conference in San Francisco.” Specifically, they noted that U.S. discriminatory immigration and travel policies under Trump target populations affected by HIV, including people from Muslim, African, Caribbean and Latin countries as well as sex workers and people who use drugs.

IAS did not change course. But AIDS 2020 cochairs and leaders penned an open letter to their critics (you can read it in full here). “With the selection of the Bay Area for AIDS 2020,” they wrote, in part, “we have the chance to elevate U.S. and global HIV concerns onto the national and international stage. That includes shining a spotlight on and working to reform unjust policies that restrict entry into the U.S. and other countries and perpetuate a climate of stigma and fear. This is a rare moment to put HIV and those most affected, including people of color, minorities and the economically disadvantaged, at the center of political discussion. It won’t be easy, but we will rise to the challenge and work together—as we always have— on fighting prejudice, racism, sexism and isolationism wherever it happens.”

Critics were not persuaded. In fact, they decided to host an alternative, overlapping conference to be held July 6 to 8, 2020, in Mexico City for folks who cannot or will not attend the U.S. event (slated for July 6 to 10). The full title of the conference is HIV 2020: Community Reclaiming the Global Response. It’s spearheaded by MPact Global Action for Gay Men’s Health and Rights, the International Network of People who Use Drugs and the Global Network of Sex Work Projects; as such, HIV 2020 promises to retain a community-based, sex-positive interdisciplinary focus.

Since HIV 2020 was announced in December, it has received endorsements and pledges of support from all the U.S.-based national networks of people living with HIV. These include: Positively Trans, the Positive Women’s Network–USA, Thrive SS (representing African Americans) and the U.S. People Living with HIV Caucus.

The rift between AIDS 2020 and HIV 2020 continues to be felt. “The global HIV community is getting a divorce,” wrote blogger Mark S. King on the topic. “The community-based groups have officially broken away from the scientists, researchers and the privileged, monied establishment that largely comprise the IAS. The HIV 2020 announcement, as triumphant a development as it represents, is dampened somewhat by a sad feeling of disillusionment.”

Who knows how this will play out? Ever the optimists, we hold out hope for a rekindled romance, or at the very least an amicable settlement. 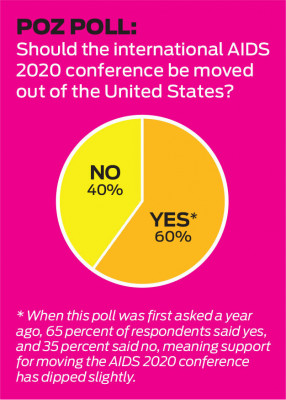