ACT UP London connects PrEP, stigma and HIV-positive immigrants to the rock biopic about Queen and Freddie Mercury.

Members of AIDS activist group ACT UP London occupied the red carpet at the world premiere of Bohemian Rhapsody, the film about iconic rock band Queen and its front man Freddie Mercury, who died of AIDS-related illness in 1991. (The film opens November 2 in the United States.)

Since early trailers for the film debuted online (the official trailer is below), critics have said the movie glosses over the AIDS crisis and Mercury’s sexuality—he had relationships with both women and men. But that’s not exactly why ACT UP London and the NHS Anti-Swindle Team held an action at the premiere.

Instead, activists were drawing attention to today’s silence around HIV, to deadly stigma and to proposed cuts to the National Health Service (NHS, the United Kingdom’s health care system) and its sexual health care services. What’s more, the ACT UP members are fighting for access to pre-exposure prophylaxis (PrEP) in their country, and they’re highlighting the plight of immigrants.

In a statement posted on its website, ACT UP London member Jeremy Goldstein writes:

“Freddie ‘Killer Queen’ Mercury was a migrant who died from AIDS, and today HIV-positive migrants are some of the most oppressed in the HIV/AIDS community. We are here today to highlight the ongoing crisis. Farrokh Bulsara was professionally known as Freddie Mercury was born in Zanzibar in 1946. The son of Parsis, he spent most of his childhood at boarding school in India. At seventeen he and his family became refugees fleeing from the Zanzibar revolution. After an epic career with Queen, Freddie sadly died in 1991 in his home in Kensington the day after he publicly announced he was living with HIV. We demand that all HIV-positive migrants are treated with upmost dignity, that HIV services stop being closed down and an end to all illegal detention of HIV-positive migrants”

For more about the protest, watch ACT UP London’s video of the action at the top of this article and visit its website here.

For background on PrEP in England, read “Britain’s High Court Rules Against Patent Extension on HIV Med Truvada” from last month, “‘Shock and Disbelief’ That PrEP Won’t Be Widely Available in England” from March 2016 and “U.K. HIV Diagnoses Fall 18% in One Year” from October 2017.

Meanwhile, reviews of Bohemian Rhapsody have been mixed, with most praising the acting (Rami Malik as Mercury), costumes and music (duh) but complaining about the film’s cookie-cutter rockumentary format. Mercury’s complicated sexuality and AIDS diagnosis are included in the film, but viewers disagree about how those topics are handled.

The Hollywood Reporter summarizes many of the reviews here.

And for fun, there’s also this Slate piece: “What’s Fact and What’s Fiction in ‘Bohemian Rhapsody’?” 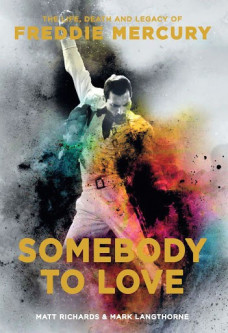 A 2016 biography of Mercury titled Somebody to Love takes a deep dive into the singer’s life and death (and the hidden meaning behind the hit “Bohemian Rhapsody”). For a POZ interview with author Mark Langhorne, read “Freddie Mercury Bio Links the Rock Star to AIDS ‘Patient Zero.’”