Does the ’Art AIDS America’ Exhibit Include Enough Black Artists? 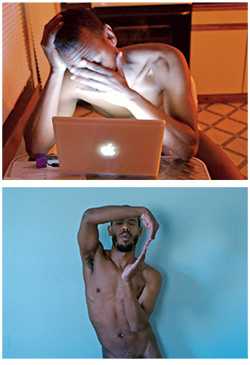 When the Art AIDS America traveling exhibit opened in October at the Tacoma Art Museum (TAM) in Washington, the show’s two curators expected it to be controversial. Turns out they were right, though not for reasons many predicted.

It hasn’t been the show’s religious or sexual content that has caused the biggest stir. Instead, it is this: Out of about 107 artists in the exhibit, only four are black.

This lack of representation has led to protests and die-ins, including the social media campaigns #StopErasingBlackPeople and #DieInAtTAM.

“I was not interested in having this conversation with Rock Hushka at all,” writes Jordon before the Q&A. “When you curate a show about HIV in America and all but entirely exclude Black artists, we are past the point of dialogue.… Since Black Americans are more severely impacted by HIV in the US than any other racial group I recognize that this exclusion is a serious problem.”

Hushka began the interview by stating: “First I need to emphasize this is not an exhibition about the crisis, but about the way the general arc of American art history was bent by the crisis. This is a small distinction but an important one.… We included works from almost every year, and that’s a lot of real estate already. We tried not to cluster things too much, and it has to do with what works we can borrow and who would lend.”

Hushka elaborated further with the Tacoma News Tribune, stressing again the exhibit was never intended to represent the current AIDS crisis but instead to focus on how AIDS changed the narrative of art history.

Meanwhile, journalist Jen Graves, writing for The Stranger, picked up on the growing controversy. In “The Protest Over the Lack of Black Artists at Art AIDS America Goes National,” Graves presents several statements from some of the black artists included in the show as well as from Kenyon Farrow, an AIDS activists who was a consultant from the show.

Farrow wrote that “a few of us pointed out [to the exhibit’s curators that] focusing on ‘canonical’ works would obviously limit the voices to mostly white men, and suggested they lean against that direction. … I also suggested they include video and audio installations that would expand what was considered ‘art’ and would then include Marlon Riggs, house music, hip-hop and ballroom culture that was definitely cultural production addressing the epidemic of the period. Obviously none of that was taken seriously.”

In 2016, Art AIDS America will move to the Zuckerman Museum of Art in Kennesaw, Georgia, before closing at the Bronx Museum of Art in New York. For more about the exhibit, read the POZ feature story “Art That Makes You Go Hmmm.”