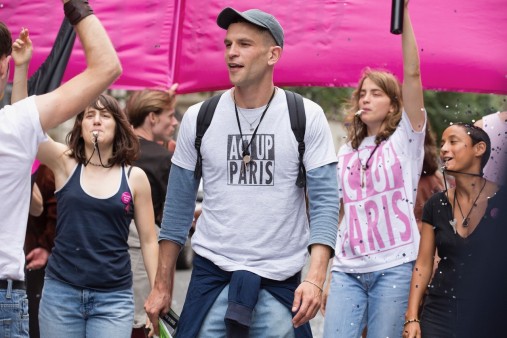 Amid the protests, funerals and endless meetings, these activists fight, love and dance.

The film BPM (Beats Per Minute), a powerful AIDS movie that won the Grand Jury Prize at Cannes Film Festival in France this year, is finally playing in the United States, opening Friday, October 20, in New York City before expanding each week to locations across the country.

The film details the individual struggles and group dynamics of ACT UP Paris in the early 1990s. Directed by Robin Campillo, who was a member of the group, the film is described in the U.S. trailer as this:

In Paris in the early 1990s, a group of activists goes to battle for those stricken with HIV/AIDS, taking on sluggish government agencies and major pharmaceutical companies in bold, invasive actions. The organization is ACT UP, and its members, many of them gay and HIV positive, embrace their mission with a literal life-or-death urgency. Amid rallies, protests, fierce debates and ecstatic dance parties, the newcomer Nathan falls in love with Sean, the group’s radical firebrand, and their passion sparks against the shadow of mortality as the activists fight for a breakthrough.

But that summary hardly captures the praise of ACT UP New York member Peter Staley, who posted this after attending a screening:

Writing about the film in New York magazine, in an article titled “BPM (Beats Per Minute) Is the First AIDS Film Where the Group Is the Hero,” POZ contributor and AIDS activist Tim Murphy observed that “it’s no surprise that France, with its traditionally deeper socialist regard for the messy collective rather than the rugged individual, beat America to the punch in creating a film that shows how changes in dealing with HIV/AIDS actually happened: in long, difficult meetings; among many people of different priorities, dispositions, genders and sexualities; and never magically.”

To see which theaters are screening BPM, click here.

And to read the recent POZ issue about AIDS activism in 2017—featuring Tim Murphy—click here.