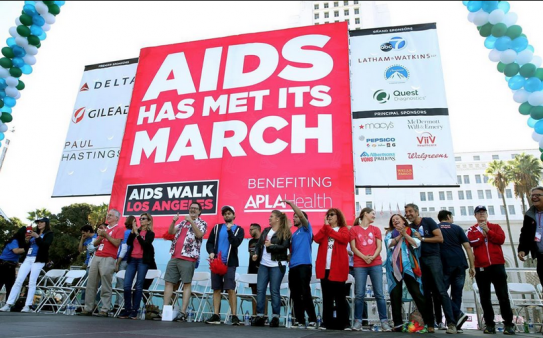 How AIDS Walk Los Angeles Has Changed Since 1985 [VIDEO]

In its 35 years, the annual event has raised over $88 million for APLA Health and others.

“This is such an important walk,” ABC7’s Karl Schmid said in that station’s coverage of the event. “Ten thousand people gathering in the streets all to raise money for APLA Health and AIDS-related charities.”

The theme of this year’s event was “AIDS Has Met Its March.” As the selected Instagram posts below illustrate, the walk drew families, friends, colleagues, entertainers and more, as they remembered those they lost and raised funds to help APLA Health and others continue the fight.

APLA Health operates 16 centers across Los Angeles County, offering numerous services for people living with and at risk for HIV. More than 60,000 people are living with the virus in LA county.

Much has changed since the first AIDS Walk Los Angeles, not just in terms of treatment and life expectancy but also the march itself. “It used to be about remembering the people we’ve lost,” APLA CEO Craig Thompson told ABC7. “It was a sort of solemn march. Now it’s exuberant and happy because we’re talking about ending the epidemic in our lifetime.”

“We have the tools and science right now to end this epidemic. We can stop it,” added Schmid. “But because of stigma and the shame and the fear and the misinformation that’s out there, people don’t go and get tested, they don’t go into treatment, they don’t talk about it, so the virus keeps spreading.”

Schmid, a red-carpet correspondent for ABC, made global headlines last year after disclosing his HIV status on social media. To read a POZ profile on him, check out “The Accidental HIV Activist.”