The HIV infographic site AIDSVu has released a state-by-state pre-exposure prophylaxis (PrEP) use map, indicating variations across the nation in the rate of use of Truvada (tenofovir disoproxil fumarate/emtricitabine) as PrEP. The site already has a map that outlines facets of the HIV epidemic in rich detail, and its administrators indicate that they will provide more granular, county-level detail on the PrEP map later this year. 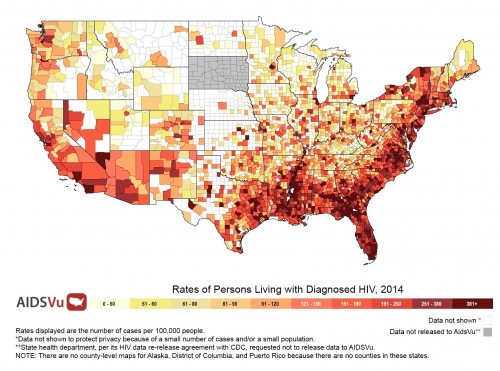 The map was released to coincide with the 2018 Conference on Retroviruses and Opportunistic Infections (CROI) in Boston.

To estimate current PrEP use, defined as an individual receiving at least one day of Truvada for use as HIV prevention in a calendar year, the investigators behind the map relied on a data set from Source Healthcare Analytics.

AIDSVu’s PrEP-use figures, however, are likely underestimates. Although Source Healthcare Analytics draws information on Truvada use from a vast pool of sources, including Medicare Part D and Medicaid, it does not include such prescription information from entities that do not make it available, such as studies known as demonstration projects that provide PrEP, the Department of Veterans Affairs and closed health care systems that provide their own pharmacy services, like Kaiser Permanente.

Additionally, 28 percent of the Truvada prescriptions identified in the data set lacked sufficient associated information to indicate the intended use of the drug. (Because there is no specific diagnosis code for Truvada’s use as PrEP, determining who is not otherwise receiving it as treatment for HIV or hepatitis B virus (HBV) is an exercise in deduction.)

CROI also saw a poster presentation from a research group that relied on the same data set as AIDSVu and looked at variations between states, regions and various demographics in the ratio between a certain population’s HIV diagnosis rate and that overall group’s use of Truvada as prevention. This ratio was lower in the South, among African Americans and among people younger than 25.

Gilead Sciences estimates that as of the fourth quarter of 2017, 153,000 people were using PrEP in the United States.

During 2016, 93 percent of all PrEP users were male. Males used Truvada for prevention at a rate about 14 times greater than females. Presumably nearly all of those male PrEP users were men who have sex with men, a demographic that accounts for 70 percent of new annual HIV infections according to the CDC. (AIDSVu does not break down its statistics according to the sex of men’s sexual partners.)

That same year, 64 percent of PrEP users were 25 to 44 years old, an age bracket that accounts for 54 percent of new HIV diagnoses.

Nearly half of PrEP users in 2016 lived in five large U.S. states, New York, California, Florida, Texas and Illinois. The highest rates of PrEP use—the proportion of a state’s population using Truvada for prevention—were in New York, Massachusetts, Rhode Island, Washington and Illinois. The number of PrEP users per 100,000 people was 47.3 in the Northeast, 28.1 in the West, 22.6 in the South and 23.5 in the Midwest. Thirty percent of PrEP users, or 23,091 people, were in the South, a region that accounted for 52 percent of HIV diagnoses.

Editor’s note: A previous version of this article incorrectly stated that Gilead’s estimate of 153,000 PrEP users referred to the third, as opposed to the fourth, quater of 2017.

To read a more complete description of the limitations of the PrEP-use data set, click here.

To read a press release about the new map, click here.