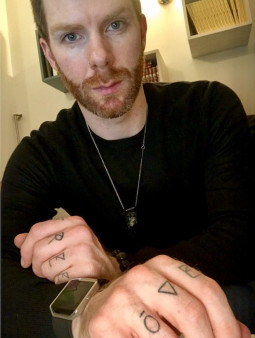 Spencer Dawson knows having HIV is nothing to be afraid of.

I am HIV positive and undetectable. I probably had the virus in my system for four months when I found out while working with a friend at the Brooklyn Pride street fair, Saturday, June 9, 2018. The booth next to ours was offering free HIV tests. I hadn’t been tested since February, and, while I hadn’t been sleeping with anyone, I decided to take the test. When he said the word positive, I was like skeerrrrrrrr. Pump the brakes, my man. You sure you know how to read that thing?

He asked me how I felt, and I said “I have to go back to work, so I don’t know. I’ll figure it out.” And now as I’m typing this, I realize I spoke that into existence by accepting it right away. I thought, “Well, this is reality, so deal with it. Accept everything that comes along with it. The pain, the hurt, the shame, the guilt, the frustration, the anger, the regret. Accept it.”

Even though it’s way too real, I never thought it would be. But it is. And the only way to move on is to accept it. It took everything I had to hold back from falling apart at Pride. I was working. The Pride March was after the street fair, so it ended earlier than the other ones I’ve worked. When the police and organizers came around to tell us to close up earlier than I was expecting, I was so pent-up I felt like I was being attacked. I was feeling the pressure of the whole world on my neck and shoulders. It was so heavy. As if it was going to collapse all my bones in a split second, and my head would float in the air for a few seconds because it hadn’t realized yet that it was not attached to anything. Yes. That’s what it felt like. I had to get through all of that in order to make it out of there without losing my shit.

I called up a friend who lives in Brooklyn and asked to spend the night. The first night she and I met we were stoned and naked together with another friend we had just met that same day. We called upon the spirits to restore us, performed massages and Reiki on each other and basked underneath the Milky Way at the edge of a lake in the middle of October in the middle of the woods. It was glorious. Of course, it was no problem for me to unexpectedly spend the night with my witch sister. She said OK, and I cried in her arms all night. She protected me.

I knew I couldn’t do this alone. I am an emotionally strong and expressive magical being, and I’ve done a lot of work on myself and my emotions. I know my shit because I’ve done the work. I haven’t explored this part of myself in a modern academic setting, but I’ve done legitimate work on myself. But this. I am HIV positive. What? I can’t do this by myself, I thought.

Thank God, oneness, eternal sunshine, source, the all-knowing, that I have the life I do. I am beyond privileged to have been created by my parents in this vessel that I currently occupy called Spencer. I credit this privilege with my ability to craft the friendships I have. That same oneness brought some very special and wonderful beings into my life. And it’s because of the work I’ve done on myself and the work they’ve done on themselves at the same time that we’ve been able to craft such special relationships. I am grateful.

I had to come out with it right away. I couldn’t do this alone. I couldn’t keep it inside. I knew if it were to sit and fester that I would become truly unhealthy. I was so fearful. But it had to be released. Over the next two weeks, I molded the type of story I wanted to convey about myself, knowing full well that some of my closest friends and family might not be able to take it very easily. I set an intention to respect how they deal with their emotions and to make sure that they understand that I have nothing to worry about and therefore they have nothing to worry about.

I stressed that my doctor explained that I could be undetectable within a month of taking my medication every day. And I was. My viral load went from 29,600 to 24 after the first month on meds. I needed my mom and dad and siblings to know that. To know that they do not need to worry about me. They know I’m strong, but they also know I live passionately and that not many other people think about the world in the way that I do. But I’m not sure they knew that all the people closest to me and many more who are just Instagram friends and many more I have yet to meet from all around the world all think about things in the same way that I do. We all see a better world for all of us. And it’s my belief that the world opens up with love and honesty. So for me to hold something like my status inside and not release it would be dishonest.

While I was sitting in the tent at Brooklyn Pride learning my status, I had a split-second thought when I freaked out because I felt like nobody would ever love me again. Like, truly, actually love me the way I dream about. The way almost all of us dream about. A passionate, natural, effortless, slowed-down and truly felt and experienced kind of love. A free love. With the sexiest guy you can imagine.

I thought that was gone. That I was tossed aside. Garbage. Ugly. Not worthy of the love that I dream about. I know now that none of that bullshit is true. That’s fear talking.

Around the time I believe I went through my seroconversion, I’d also decided to be celibate. Some part of me accepted that I can’t give myself to anyone unless there’s an emotional and spiritual attachment. I know that sex is something to be enjoyed, yes, but not abused. Not forced. Not wasted. I don’t like wasting things. Waste and addiction to consumption are the biggest threats to our survival and to our collective planet that we are coexisting on. Wasting something I’m amazing at on someone who can’t appreciate everything else I have to offer in life or, worse yet, doesn’t even want to, is not something I’m able to do anymore.

I don’t know if I can pinpoint what it is exactly that made me want to start dating again. But I expressed myself truly and fully to someone and received an answer that validated my release from that energetic connection. I set myself free. My honesty set me free, and I realized that I was ready to jump back in to see what kind of flames are out there. So I joined a dating website.

At the same time, I also found a really amazing support system of people living with HIV. After my first meeting a few of us went out for drinks. We have become an amazing group of friends with varied and diverse backgrounds and vastly different experiences with HIV.

I’d like to think that I’m invincible, but I know someday I might be rejected, and it could hurt me. But I don’t want to experience that, so I live in a space where I experience what I want. I am choosing my experience because I am allowing what needs to happen to happen. I have had nothing but honest and open responses to sharing my status with potential partners. This has allowed healing to begin.

A part of that healing has been learning to allow myself to be comfortable in larger crowds. I went on a booze cruise around Manhattan and met a guy. Not through the internet. But face-to-face. It was unexpected. We chatted briefly and agreed to exchange contact info later, as we still had a few hours left on the boat. I thought I was so dumb when I let him walk away. We didn’t end up exchanging info on the boat, but I told my friends I needed to find him, and I did. Thanks, interwebs.

And he’s glorious. I don’t know what’s to come of it, but my point is that he knows my status. Before I told him I thought, If he’s not OK with it, then he’s not the glorious man of my dreams, and that’s OK. Thank God it didn’t faze him at all. Now, if it doesn’t work out, it’s not because of my status.

HIV is nothing to be afraid of anymore. Undetectable = Untransmittable. We can live happy, healthy, long lives. And we can still find the man of our dreams.

Oof. How do I answer that one? If there’s a set standard for determining this, then it hasn’t happened yet.

There’s this whole thing I have against living with regret.

Well, obviously, first, it would be for everyone living with it not to have it anymore and for no one ever to get it again. But since I can’t do that then it would be eradicating the stigma.

Anyone who’s had to struggle though this without the resources that I’ve had available to me. I don’t know how I’d do it, and those are the real stories that need to be told. Thank God for Pose.

That I know we can do better.

“Forget regret or life is yours to miss.”

Elephant. They have grace, presence and power.