Alternative to AIDS 2020 Conference to Be Held in Mexico City

It’s planned by activists who cannot or will not attend the San Francisco gathering because of U.S. discriminatory policies.

A group of HIV activists are organizing an alternative HIV conference in Mexico City to be held concurrently with the July 2020 International AIDS Conference 2020 (AIDS 2020) in San Francisco, according to a press release from the activists. AIDS 2020 will take place July 6 through 10, while the parallel HIV2020 will run from July 6 through 8.

The activists represent international networks of population groups affected by HIV, ranging from people living with the virus to treatment activists, sex worker and allies. They’re working together as the HIV2020 Alliance. 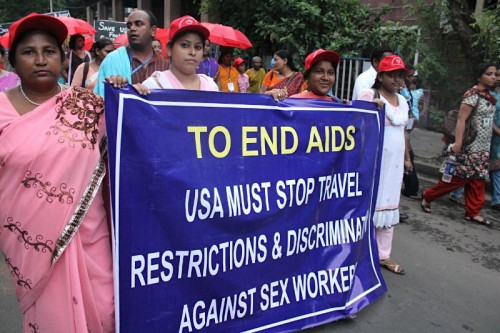 The alliance points out that many people cannot or will not attend a conference in the United States because of its discriminatory immigration and travel policies against people from Muslim, African, Caribbean and Latin countries, people who use drugs, and sex workers.

You can learn more about the conference and alliance at HIV2020.org. The full title of the conference is HIV2020: Community Reclaiming the Global Response.

The international AIDS conferences, including AIDS 2020, are organized by the International AIDS Society (IAS). The largest gatherings of their kind, they are held every other year at different cities across the globe. This summer, the 23rd international conference, AIDS 2018, was held in Amsterdam. (For a roundup of the scientific research that emerged from AIDS 2018, read “All the AIDS Conference News That’s Fit to Print.”)

The decision to hold AIDS 2020 in San Francisco has been met with controversy since it was first announced earlier this year. For more details, see the POZ article “Why Activists Want the 2020 AIDS Conference Removed From the U.S.” and the POZ feature “How Red Does the Line Have to Be?”

In the HIV2020 press release, George Ayala, executive director of MPact Global Action for Gay Men’s Health and Rights, says that IAS’s decision “to move ahead with a conference in the U.S. suggests a willingness by mainstream HIV actors to tolerate the discrimination of people from Muslim, African, Caribbean and Latin American countries, people who use drugs, sex workers, and transgender people. We plan to rectify this and to work with community members to reclaim the global HIV response at the HIV2020 conference.”

This is not the first time a parallel conference has been held. When AIDS 2012 took place in Washington, DC, global activists hosted alternative events in India and Ukraine in protest.

The HIV2020 Alliance describes its conference as “a community-centered, key population–led, interdisciplinary, intersectional, and sex-positive event. Its aim is to: build a safe and friendly space for the equitable exchange of information, knowledge, experiences and expertise by ensuring diverse voices are heard and reflected; promote community-led solutions and good practice in sexual health and human rights; amplify community voices in calling out the inequities experienced across key populations and specific legal restrictions on some key populations’ right to freedom of movement; demonstrate the importance of meaningful involvement of communities in health and human rights responses; reaffirm community commitments and priorities to global health and human rights responses (inclusive of HIV); and model an innovative approach for deliberating new research, tools, and strategies and their real-life implications, with communities as equal partners.”

“It is irresponsible to put on an event of this size in a country that is inhospitable to people most affected by HIV and AIDS,” Ayala said in the press release. “The IAS’s decision resurfaces questions about the importance and community-relevance of large, multi-million-dollar conferences in the face of shrinking investment in the global HIV response.”

The announcement of HIV2020 was made on December 10, 2018, which marks Human Rights Day. Founded by the United Nations General Assembly, Human Rights Day celebrates its 70 anniversary this year.

UPDATE: All of the U.S.-based national networks of people living with HIV have endorsed and pledged to support HIV202. Those groups include:

“We are a nonprofit organization representing Black men and women living with HIV,” said Malcolm Reid, policy director of Atlanta-based Thrive, in a press release on the support and pledge. “We understand that some of our members and supporters may believe that hosting AIDS 2020 in the U.S. would be a benefit to them; however, we stand in solidarity with HIV2020 because we are here to advocate for all people living with HIV. We also realize that the cost of attending a San Francisco–based conference will be prohibitive for most Black people living with HIV in the U.S.”

“We look forward to supporting HIV2020 and call on donors, funders and researchers to step up and resource this community-driven conference at the same level they might commit to a Bay Area–based event,” added Andrew Spieldenner, chair of the U.S. People Living with HIV Caucus.