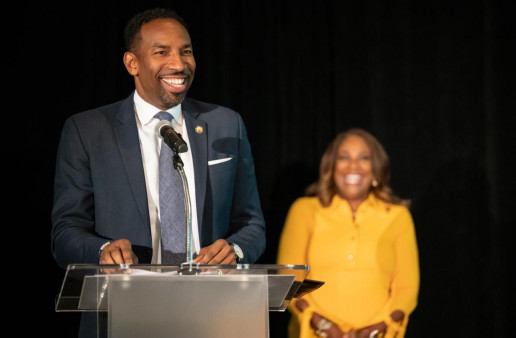 Federal HOPWA funding to Jerusalem House will be slashed by 44%. But Atlanta’s mayor signals support for bolstering HIV housing.

Jerusalem House, the oldest provider of housing for Atlanta’s low-income and homeless HIV population, celebrated over 30 years of service with a Re:New luncheon benefit October 20. Mayor Andre Dickens attended the event, telling the crowd that he remained “dedicated to providing quality housing opportunities for everyone.”

His support is needed. Jersualem House faces a 44% reduction in federal funds—from $22 million to $13 million—from the Housing Opportunities of Persons With AIDS (HOPWA) program, according to a Jerusalem House statement.

To meet the financial challenges, the Atlanta nonprofit sold its Family Program property and launched a new housing strategy to seek philanthropic partnerships and expertise in the field and to purchase additional housing.

WOW! Thanks to our fantastic Emcee @karyngreer of @wsb, and our honorees, sponsors, volunteers and guests for a wonderful luncheon today! We were honored to have Mayor @andreforatlanta speak! #JHrenew2022 pic.twitter.com/JlkulkuL8H

“Jerusalem House is positioning itself for continued success as we cope with a combination of significant external challenges that will affect how we provide necessary housing and services,” said Jerusalem House president and CEO Maryum Lewis in a statement. “Rental housing costs are spiraling upwards as demand increases. Our scattered site program, which houses people in apartments across the area, has struggled to find and keep apartments.”

Lewis went on to note, “Stable housing is key to creating positive health care and life outcomes. Our supportive services help residents maintain their housing and offer opportunities that lead to upward mobility.”

The Jerusalem House luncheon was originally planned for March 2020 but was postponed until this month because of the COVID-19 pandemic. Click the Facebook post below for images from the luncheon:

In recent years, HOPWA operations in Atlanta have been embroiled in controversy. As POZ noted in summer 2019, the city allegedly failed to spend $41 million in federal funds to provide housing for people living with HIV and AIDS. Specifically, Atlanta fell behind on paying the nonprofits contracted by the city’s HOPWA program to provide housing and services. This meant the nonprofits could no longer pay their clients’ rents, in one instance putting nearly 250 people at risk of losing their homes. To avert that crisis, the Atlantic City Council passed emergency legislation to fund one of the housing nonprofits.

At Jerusalem House’s Re:New Luncheon, Mayor Dickens spoke to the crowd about his dedication to AIDS housing and Jerusalem House. A press statement from the mayor’s office elaborated:

During today’s “Re-New: A Luncheon Benefitting Jerusalem House” event, Mayor Dickens outlined the additional work the city is doing to support HOPWA service providers, including having the Department of Grants and Community Development coordinate with procurement, law and finance to streamline the process for contracting for HOPWA service providers. This streamlining also includes switching to a monitoring-based approach for reimbursement submission, which vastly reduces the burden on HOPWA service providers. Through these efforts, the reimbursement process has been reduced from 144 days to 47 days on average. In addition, the city endeavors to meet the U.S. Department of Housing and Urban Development’s 30-day reimbursement requirement and has met that goal for the past two months.

Mayor Dickens also outlined additional investments and efforts the administration is making to move HOPWA forward and striving to provide quality housing for everyone. One such effort is creating a task force to address the anticipated reduction in HOPWA grant money from the federal government. This task force will include members of the mayor’s senior staff, members of the HOPWA Advisory Committee and other stakeholders. Additionally, Mayor Dickens will be appointing a member of the Department of Grants and Community Development to serve as a member of Fulton County’s Ryan White Council’s Housing Committee.