Incorrect use of condoms, including putting them on in the middle of intercourse or taking them off before intercourse is finished, also factor into their ability to mitigate HIV risk.

Aaron J. Siegler, PhD, of the department of behavioral sciences and health education at the Rollins School of Public Health at Emory University in Atlanta, led the research team. Between May 2016 and May 2017, the investigators enrolled 252 MSM and 252 men who have sex with women (MSW). 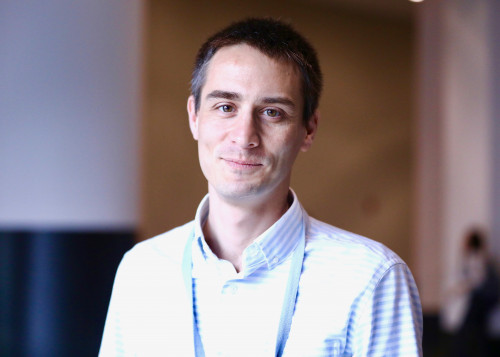 Aaron J. Siegler at the 2018 Conference on Retroviruses and Opportunistic Infections in Boston.Benjamin Ryan

The study provided the participants with latex condoms of three different varieties, including fitted, thin and standard. The participants were randomized to receive five of each condom type in different sequences. They were given up to four weeks to use all five condoms of a particular variety before being transitioned to the next condom type and then to the next. If they used all five condoms in a set within two weeks, they were given the next set. This meant they were enrolled for between six and 12 weeks.

Every two weeks, the men made study visits during which they completed surveys. They were also given an electronic daily diary to keep track of their sexual activity between visits.

Seventy-four percent of participants in both study arms rated themselves as very experienced at using condoms. Nevertheless, 36.3% of MSM and 38.1% of MSW reported condom slippage, breakage or both—in other words, condom failure—during the previous six months.

Two hundred of the MSM and 209 of the MSW were retained in the study through its conclusion.

For all the sex acts in the study, condom failure occurred in 1.3% of cases (64 of 4,884). Across a broad range of variables, the rates of failure ranged between 0.6% and 2.3%, including when the results were broken down by age, race, education, income, marital status, circumcision status, erectile dysfunction status, penis width and length, and condom-use experience.

For all sex during which oil-based lubricant—which is not compatible with condoms because it degrades the latex—was used, 12.5% of the condoms (2 of 16) failed.

Lubricant, the investigators offer, is the solution.

The study’s findings, the authors write, “raise the question of whether the billions of condoms distributed as part of HIV and STD prevention efforts should be accompanied by lubricant to minimize potential failure.”

“It is essential,” Siegler said in a press release, “for clinicians and public health agencies to offer patients the full range of prevention options, including condoms and pre-exposure prophylaxis (PrEP). Our study demonstrates that confidence in condoms is merited. When condoms are used with condom-compatible lubricant, performance is excellent for all users.”