Plus: The publication of a sweeping oral history that recounts the AIDS-themed masterpiece.

A quarter century after its Broadway premiere, the Pulitzer Prize– and Tony Award–winning AIDS play Angels in America returns to the Great White Way.

Playwright Tony Kushner’s masterwork—the full title is Angels in America: A Gay Fantasia on National Themes—consists of two parts, Millennium Approaches and Perestroika (each lasts nearly four hours, and the story continues from the first to the second part). Tickets for both parts of the new production, which is transferring from London, are sold together. The same cast performs in both shows.

Coinciding with the 25th anniversary of the Broadway production is the publication of The World Only Spins Forward: The Ascent of Angels in America. It’s a sweeping oral history not only of the play but also of American history and culture from 1978 to the present day. Written by Isaac Butler and Dan Kois, the book is built on interviews with more than 250 people, including the show’s current cast, those involved in the play’s inception and those who starred in the 2003 HBO adaptation (for example, Meryl Streep and Al Pacino) as well as politicians, cultural figures, friends and more.

The 18-week Broadway run starts previews on Friday, February 23, and opens officially on Sunday, March 23. The epic story unfolds in mid-1980s New York City, when the devastation of AIDS first began, but the tale expands to weave themes of religion, Reaganism, McCarthyism, climate change, gay rights and immigration. For ticket packages—prices range from $99 to $318—and more information, visit AngelsBroadway.com. 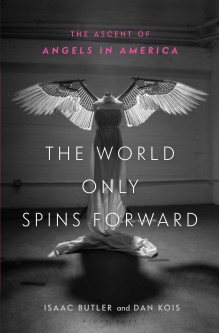 An oral history of “Angels in America”Bloomsbury Publishing

Meanwhile, The World Only Spins Forward originated two years ago as a much shorter oral history on Slate.com, which you can read here. Slate has also just published a new excerpt titled “Angels in North Carolina: How one Southern theater won a culture battle but lost the culture wars.”

Vogue.com recently profiled the show’s “Triumphant Return to Broadway,” including a photo shoot with Annie Leibovitz (see above).

If you can’t get to Broadway, you can always look for the HBO version, directed by the late Mike Nichols, on your streaming service. When the miniseries debuted, Michael Musto interviewed Angels playwright Kushner for POZ; that cover story is titled “Born Again.”

And be sure to click on these promotional Instagram posts from @angelsbway to get their full effect.