His work is profound, beautiful, at times startling and always ferociously honest.

Hunter Reynolds, a deeply gifted and prolific artist and activist, has been documenting his journey as a gay man living through the AIDS epidemic since he was diagnosed with HIV in the initial days of the crisis. An early member of ACT UP and a cofounder of ART+ Positive, an ACT UP affinity group that battles homophobia and censorship in the arts, Reynolds, 63, has expressed his experiences to the world via photography, video, performance and installation.

For his alter ego, Patina du Prey, Reynolds’s creative articulation erupts in the designing and donning of sculptural gowns, including the epic Memorial Dress (1994), a black strapless ball gown with a hoopskirt that bears the names of 25,000 people who died of causes related to HIV. His work is profound, beautiful, at times startling and always ferociously honest.

Living amid the creative chaos of a Brooklyn artist’s apartment, Reynolds has been waging a war with another health challenge for nearly seven years: an aggressive skin cancer made more severe by his HIV. The dermatologist who diagnosed him grimly stated, “This will be what kills you.”

“It started with just superficial stuff, just like on the surface,” Reynolds says. But then it spread. “I had to replace my entire nose. That was like three years ago. Then a year and a half ago, they removed my right eye.” The doctors also removed his teeth. “They said, ‘We have to pull out all your teeth before the radiation because radiation to the face can cause bacterial infection, which can derail the entire radiation process,’” he says.

He now has several caretakers who wade in and out of his apartment as he powers through the challenges and fears that accompany this solemn diagnosis. Some days he feels good, and some days the pain and trauma of illness overwhelm him and keep him immobile. 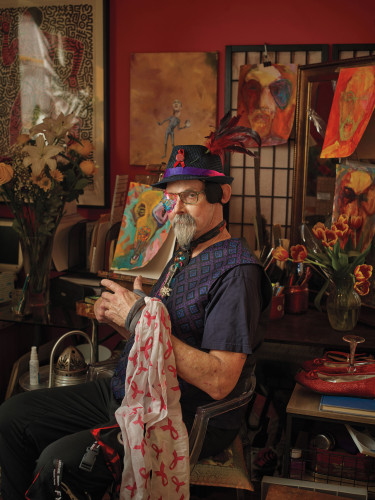 “I’m on a steroid that really helps,” he says. “It’s allowed me to get my appetite back and work, get up and feel good during the day. But there are these breakout days when it’s just crazy pain.”

Despite all these challenges, Reynolds is still making art. “I’m finishing this mega epic piece. It’s going to be huge,” he says. “I’m working on my self-portrait. I’m working with people; I’m collaborating. I’m at the point where I’m feeling good and just trying to get the work done.

“Anyone going through this sort of thing, you just have to find the strength in yourself to have hope. Ray Navarro was a video activist, and he died at 26 years old. He was one of my best friends. He changed my life on his deathbed. He opened up like a flower to his death, and he used everyone around him to help him create everything he wanted before he died,” Reynolds says. “So you know how you do it? You do it. When I want to wither away, I just open up and do what I can do.”