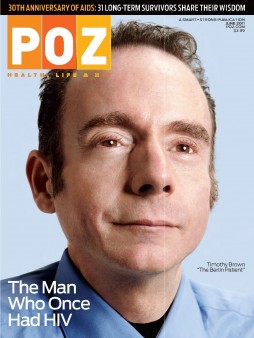 So why is he taking meds every day?

Timothy Ray Brown—formerly known as the “Berlin Patient”—has marked a decade since he was cured of HIV. Brown, who now lives in San Francisco, celebrated the anniversary with a cake during a community workshop in Seattle, site of the 2017 Conference on Retroviruses and Opportunistic Infections (CROI), reports The Bay Area Reporter.

While living in Berlin in 2006, Brown, who was HIV positive and on antiretrovirals at the time, developed leukemia. To combat the blood disease, Brown underwent chemotherapy that killed off his immune cells. In rebuilding Brown’s immune system, his doctor used cells with a CCR5-delta-32 mutation that made them resistant to HIV. After a decade of various tests, Brown remains free of HIV.

“In a way it seems like yesterday, but in a way it feels like a long time ago that I had to take medications every day,” Brown told The Bay Area Reporter. “That is the best part of my cure—not needing to take daily medication and not needing to depend constantly on my doctors for my survival.”

So why is he now taking daily HIV meds again? To prevent acquiring HIV. Because his immune cells are still susceptible to the less common strains of HIV that use the CXCR4 receptors to infect cells, Brown has started taking Truvada as PrEP, or pre-exposure prophylaxis.

“Recovery has taken too long, but I feel great and I am grateful for everything,” Brown told the newspaper. “I still hang on to the hope that everyone living with HIV will be cured in my lifetime.”

As The Bay Area Reporter notes, Brown’s story continues to give hope to people with HIV and to inspire researchers across the globe.

To read the POZ 2011 cover story about Brown, read “Patient No More.” And to read a collection of our articles on HIV cure efforts, click on #Cure.