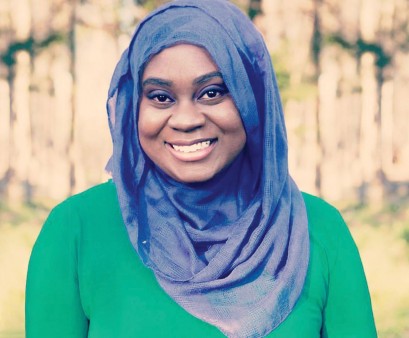 Khadijah Abdullah hasn’t always had as much rahma—an Arabic word for mercy—as she does now. The steadfast HIV activist knew virtually nothing about the disease when she was an undergrad at Southern Connecticut State University. But while working at Saint Raphael’s Hospital during her college years, she found out a friend and fellow student was HIV positive. In that moment, she realized her naiveté.

Up until that point, Abdullah had had very little sexual education, which she partially credits to her Muslim upbringing. She didn’t understand the nuances of sexually transmitted infections (STIs) and HIV. In the eighth grade, she was pulled out of her sex-ed course because her parents deemed it inappropriate. So when a Muslim man was admitted to the hospital for AIDS, Abdullah was a bit surprised.

“Meeting a Muslim with AIDS, I thought, ‘Whoa, what is this? Does this happen?’” she recalls, adding that such an outlook can put a person at greater risk of contracting the virus.

Because taking drugs, having premarital sex and engaging in nonheterosexual relationships are frowned upon in traditional Islamic beliefs, many Muslims deny that they are also at risk of contracting HIV. This attitude has led to a lasting stigma toward HIV-positive Muslims within the community, encouraging judgment, loneliness and isolation.

Shocked by the stigma and inspired by her fellow student and the Muslim man she grew to befriend, Abdullah decided to do something. She went back to SCSU and worked with student groups and nonprofits to establish the first AIDS Awareness Week on her campus. The week included everything from a vigil to a formal dinner to free condoms, all in the name of HIV/AIDS education.

She didn’t stop there, though. Abdullah changed her major to public health with a focus on health promotion and actively sought out internships that would allow her to work with the HIV/AIDS community. She also volunteered at local AIDS organizations.

Upon graduation, she joined AmeriCorps and continued to work with clinics to provide workshops and free testing for the virus. Through these experiences, she realized she wasn’t the only American Muslim who hadn’t been educated about HIV, which is why in 2012 she founded RAHMA, which in addition to meaning mercy stands for Reaching All HIV-Positive Muslims in America.

“I wanted mercy to be my guiding principle for the work that I do. You have to have mercy; you have to have compassion to work in this field with people who are positive,” Abdullah says. “I wanted my community to have compassion, because the first person I met who was Muslim and had AIDS said he’d experienced stigma, judgment, isolation; he was afraid to disclose his status because of how he felt people would react.”

He’s not the only one. Fearing what their families and friends will think if they find out, many HIV-positive Muslims discuss their positive status and seek their answers online anonymously. This fear of disclosure also means that very little information on HIV-positive Muslims gets collected. And this, in turn, furthers the incorrect assumption that very few Muslims are living with HIV, making it even more difficult for those who are, in fact, HIV positive.

“HIV doesn’t really care what faith you belong to, but I’ve noticed that in a faith community, so much work needs to be done,” Abdullah says. “If faiths can come together to take a stand against stigma, people will feel safe going into their separate faith communities and not feel like they’re being judged for being positive.”

While Muslim beliefs may not align with certain at-risk behaviors, that doesn’t mean these behaviors don’t occur. According to a UNAIDS analysis, in Middle Eastern and North African countries (which are majority Muslim), new HIV infections in 2014 were estimated to be: 41 percent clients of sex workers and other sexual partners of key populations, 28 percent people who inject drugs, 18 percent gay men and other men who have sex with men, 9 percent sex workers and 4 percent rest of the population.

For some context, though, the Middle East and North Africa region has one of the lowest HIV prevalence rates in the world (0.1 percent, which compares with 4.7 percent prevalence in sub-Saharan Africa). HIV rates and AIDS-related deaths, however, are increasing in the region.

Yet many Muslim countries still discriminate against these key populations (as when 51 Muslim countries prevented 22 organizations from participating in the United Nations’ High-Level Meeting on Ending AIDS), and this discrimination leads to less disclosure and the possibility of more infection.

It’s not all bad news, though. Some Muslim countries have started to accept that these populations exist within their borders and as a result have begun to modernize their fight against the disease.

RAHMA is based in Washington, DC, but connects with people across the country through social media and events. The group holds numerous workshops in DC, along with free testing sessions and events that aim to provide support for HIV-positive Muslims of all backgrounds and to end the stigma and discrimination around the disease. Just one example is the retreat for HIV-positive Muslims and their allies—many of whom are Christian—that took place this summer in DC (for more about that, read “Mercy, Faith & Relaxation”).

“Our main goal is to create a safe space because everyone needs to feel safe,” Abdullah says. “We have people reaching out to us from LGBTQ communities, people coming from different ethnic backgrounds and diverse religious backgrounds, and our goal is to let them know that we’re here and we will provide resources and link those who need it to care. Only together can we get to zero [new infections].”