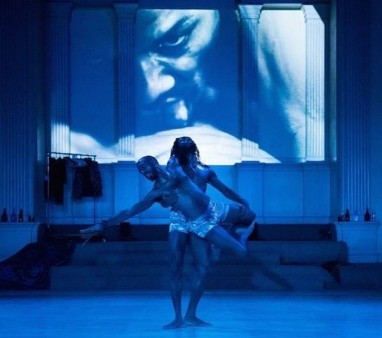 how to survive a plague Ian Douglas

How Brother(hood) Dance! Is Surviving the Plague

The dance collective reflects on holistic health, performance and the power of representation.

Created in the spring of 2014, Brother(hood) Dance! has quickly become a performance duo to watch out for. The collective, founded by HIV-positive dancers Orlando Zane Hunter Jr. and Ricarrdo Valentine, use their bodies, dance, theater, visual art, music and advocacy to inform “audiences on the socio-political and environmental injustices from a global perspective, bringing clarity to the same-gender-loving African-American experience in the 21st century.”

In 2016, the collective was invited by dancers and curators Ishmael Houston-Jones and Will Rawls to create and present new work for Lost and Found: Dance, New York, HIV/AIDS, Then and Now, Danspace Project’s 2016 multidisciplinary performance and exhibition series. Drawing from their interest in health and global connections, the archives of artists lost to the plague, such as Assotto Saint, and their mounting frustration about the lack of representation of Black queer bodies on dance stages and on the screen in relationship to HIV/AIDS, Brother(hood) Dance! created how to survive a plague. Supported by the creative talents of musician Starr Busby, photographer Josué Azor, costume designer Shane Ballard and many others, the dance shares stories—both known and unknown—from the Black experience of HIV/AIDS around the world.

Since the debut of how to survive a plague, Brother(hood) Dance! has performed it again in New York and in other cities across the United States, including Houston and Chicago. In the following interview, Hunter Jr. and Valentine discuss the meaning behind the dance, its connection to a certain documentary film and the reasons why they hope to have the chance to perform how to survive a plague for audiences around the world.

Theodore (ted) Kerr: How did you two come to work together?

Ricarrdo Valentine: We were the last two gentlemen in line for an audition. Neither of us got the job, so a few months later we said, “Screw it,” and we created a collective.

Orlando Zane Hunter Jr.: Both of us were tired of hearing, “Oh, you are such a beautiful dancer, but…” and then not getting the jobs. No more buts for us. We have to be the thing. We are the thing.

RV: And, as we came together, we realized how much we wanted to see more men who look like us dancing together.

TK: What happens after you start a dance collective? Do you rent a studio and start dancing?

OZH: These are tough economic times. After getting a MetroCard [a New York City transportation pass], feeding our bodies, paying rent, there is nothing left. Studio space is moving the coffee table to the side of the room and getting to work.

RV: From there, we just go for it. We open the laptop and hit record.

TK: What was it like when you first saw your bodies on screen together?

OZH: There is a lot to be said about dark-skinned bodies being in the same space. It makes me think about what histories and traumas come up when we start to move together. When our bodies move in the same space, our work becomes ritual, prayer, something I can’t put into words.

RV: I was like, “We have something going on.”

TK: I first saw you dance together in the performance how to survive a plague. To get the obvious question out of the way first, what does your dance have to do with David France’s movie of the same name?

OZH: It is in direct resistance to the movie. We are making ourselves seen [since the Black experience is not represented in the film].

RV: At first, some people thought that our dance was based on the movie, but I was like, How could it be?

TK: How did your dance come to be?

RV: We received a timely invitation from the curators. My previous partner had recently died in Jamaica, allegedly of suicide. He had been living with HIV on a small island that can be homophobic. Creating this dance afforded me space to begin healing and to ask, in a larger way, how we understand HIV and how we deal with it. We started by answering that for ourselves. We did a lot of research, spent time on farms and—as is our way—paid attention to the food we put in our bodies. Nutrition is a big deal for us.

OZH: It is part of our idea for how we are surviving this plague. As positive men and artists, our work is about figuring out how we can include well-being and healing into the creative process. We know that no one is going to answer this question for us. When we saw the film How to Survive a Plague, we did not see ourselves. When we looked through the dossier that Danspace provided us, we did not see ourselves. So we are out here trying to figure out: How did our people survive the plague? How are we surviving the plague? For example, we saw how back in the day white men had the funds to drop into the black market and grab drugs and treatments that could extend their lives or give them hope. But I don’t know if that was the case for us. What other methods of healing were our people using that are not being talked about today? As part of our process as dancers, we look for and share a more holistic view of the epidemic. 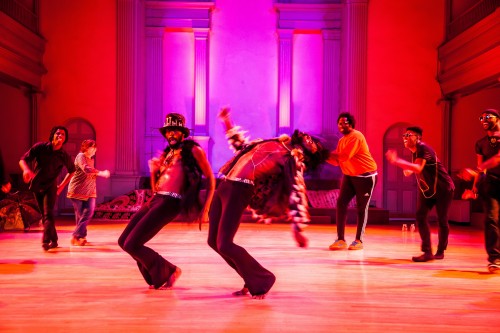 how to survive a plagueRamy Mam

TK: Can you elaborate further?

OZH: Our first Brother[hood] Dance! retreat was in the middle of the woods in Maine— we have been going to the land for solace and strength since we started the collective. As we developed, we spent some time at Soul Fire Farm for the Black-Latinx Farmers Immersion program, looking at how to decolonize our food, learning about the chemistry of food and how it works in our body and in relation to medication.

RV: I have been positive going on 10 years, and I have always struggled with taking medicine, having those conversations with doctors when they say, “You have to take medication.” I am like, “Girl, my eyes are turning yellow and all this other shit is happening.” I am like, “How are you going to just tell me to take this medication that isn’t necessarily for my specific body?” Now, with dance and growing older, I realize I have to shift the way I am being, like my eating. I make sure my meds and food are in balance. I’ve had to create my own understanding of the virus.

TK: I think people like us, who came of age after 1996, were kind of left to figure out HIV on our own. As soon as the meds were released, it seems like education and culture around AIDS disappeared and all we had was gossip, our lives and imagination. We made sense with what we had left.

OZH: I remember growing up in Minneapolis, the first time I really encountered HIV I was 16. My boyfriend, who was 18, had contracted the virus. Before that, HIV was just those “Wrap It Up” commercials on BET. When he called to tell me, I was like, “Is this a commercial?”

RV: This is why I want to see more Black and brown spaces programming our dance how to survive a plague. There is this underlying fear that we can’t talk about the virus. But we can.

OZH: There is power in showing this work in a Black space. We performed it [at JACK in Brooklyn] for Legends, Statements & Stars! hosted by Banjela Davis, and, let me tell you, the response we got was overwhelming and gratifying. I was like, “This is who this is for! This is for all of you!” They cherished it. Someone who came up to us in the audience that night is dancing with the collective now!

RV: To make that kind of magic happen again, though, we need more risk-takers in the dance world.

OZH: So few places are presenting the kind of work we are making. The American dance field hasn’t really interacted with Black queer men together. So here we are. Our dance is us archiving ourselves—and American history.

TK: Throughout how to survive a plague, the projections of names and photos of Black people throughout the history of the crisis was really powerful and sexy. You were not performing a cautionary tale but one bursting with life.

OZH: We were inspired. We went to Haiti the summer before the performance and saw work by the artist Josué Azor. He had an exhibition at the time called Erotes. We were surrounded by all these pictures of Black male intimacy, and I knew that we had to move with these photos. A few months later, the opportunity came up. The photos are powerful and represent a few different things we wanted to bring into the dance. Josué’s photos allowed us to celebrate our sexuality and spirituality. We don’t cease being either because we have HIV.

TK: Do you see how to survive a plague as being related to your other work?

OZH: Our first piece, Sun/Son, is about mass incarceration. Our second, Black Jones, is about police brutality cutting across class division when you are Black. Afro/Solo/Man, our third piece, is a portrait of a Black family through the lens of HIV, health and food. When you look at all the work together, we are exploring how systems and people are crafted within the imperial culture we live within. And by looking at these things separately: prison, police brutality, health, food and the family, we can better see how they each and together affect us and interact. The parts make up a whole, and HIV just happens to be something about who we are.

TK: To wrap up our interview, I thought it would be appropriate to ask about how you brought the dance to a close. What made you end with the Soul Train-style line dance?

RV: Oh, man, I loved that time in our history. Things were rough, but people had the dance floor to go to in a way I feel like we don’t right now. And the show created this ritual of participation and witnessing that we wanted to re-create.

OZH: It is also important to note that at a time where so many cultural organizations are programming and profiting off Black pain, we wanted to showcase our joy because we are dealing with death all the time.

RV: We are not in the moment where HIV is taking us all out like a hurricane, so we wanted to end on a note that reflected that. We are alive. We wanted to show us living with the virus.

Theodore (ted) Kerr is a Canadian-born, Brooklyn-based artist, writer and organizer whose work focuses on HIV/AIDS. He is a founding member of What Would an HIV Doula Do?. He teaches at The New School, and his writing has appeared in POZ, The Village Voice, The Advocate, Hyperallergic, The New Inquiry and other publications.