These stories recount life in the presence of HIV. 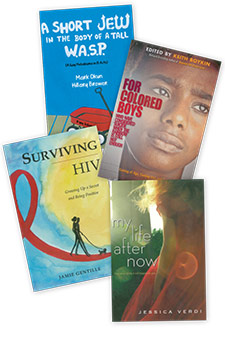 In this hot mess of a memoir, Mark Okun (a blond adopted by a Jewish family, hence the title A Short Jew in the Body of a Tall W.A.S.P.) recounts his party days in 1970s and ’80s New York. Only when AIDS and AA appear does his life, and this book, take a much-needed focus.

Keith Boykin has collected stories and essays written about and by gay men  of color. This population is at high risk of HIV, so the viewpoints presented in For Colored Boys Who Have Considered Suicide When the Rainbow Is Still Not Enough make for valuable reading.

Jamie Gentille, now in her 30s, contracted HIV during a blood transfusion when she was 3. Her memoir, Surviving HIV, which mostly focuses on her childhood and youth, is at once insightful, hopeful and immensely fun.

My Life After Now, a well-paced young adult fictional novel by Jessica Verdi, veers from the preachy and sticks to the human interest and drama when precocious 16-year-old Lucy contracts HIV after a reckless night.