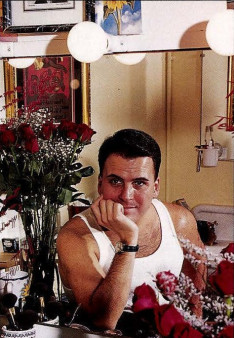 Let the Sunshine In

It ain’t over ‘til the fat lady sings

Playing the role of Mary Sunshine in the musical Chicago - one of Broadway’s biggest hits – requires David Sabella to dress in drag, sing soprano and look at life through rose-colored glasses. As Sunshine, Sabella hits glass-shattering notes that have garnered him rave reviews. But weeks before Chicago’s November 1996 opening, the operatically trained countertenor nearly lost his award-winning voice when his newly diagnose HIV status left him speechless.

“I cried for two days,” says Sabella – whose showbiz family includes brother Ernie, the voice of wart hog Pumbaa in Disney’s The Lion King. “I’d been enjoying the euphoria of starring in a Broadway show, and I was in a new relationship.” With tests indicating a rising viral load and falling CD4 count, Sabella, 32, started a Crixivan/AZT/3TC combo. Though his immune system eventually responded as hoped, initial side effects from his drug cocktail exacerbated Sabella’s post-diagnosis despair.

“the idea of singing completely repulsed me,” he recalls. "I couldn’t even think that high."

Somehow, Sabella’s meds seemed to know that the show must go on, and the debilitating side effects disappeared days before the first performance. “I felt, ‘I’m back. I’m healthy again,’” says Sabella, who shared his ordeal with only one castmate during the first few months of Chicago.

In early 1997, Sabella took a hiatus from the show to sing the title role in Julius Caesar in Virginia Opera. When he returned, he brought a bit of the conquering warrior with him. Despite the cast’s wish to raise money for Broadway Cares/Equity Fights AIDS, Chicago’s producers deemed audience appeals artistically inappropriate.

"I wrote an anonymous letter to the producers saying we’ve got to have a curtain speech,“ Sabella says. ”There’s an HIV positive member of this cast, and I may not be the only one."

The producers compromised on a recorded announcement – too little, too late. “We didn’t raise much money, and I couldn’t get over it. One night in the middle of the show, I started sobbing,” he says.

According to Sabella, his unexpected tears outed him to the rest of the cast as the author of that anonymous letter. “Anyone who didn’t know already, knew then,” he says. “It was like coming out. After six months, the reality of HIV had finally hit.”