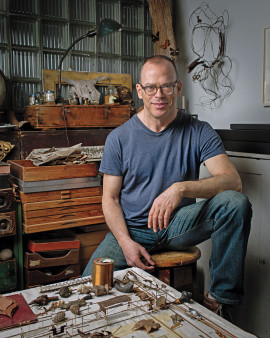 The Course of His Life

Memory and activism in the art of Eric Rhein 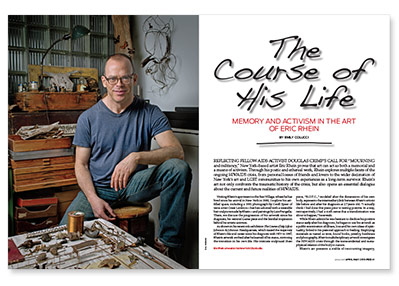 
Reflecting fellow AIDS activist Douglas Crimp’s call for “mourning and militancy,” New York–based artist Eric Rhein proves that art can act as both a memorial and a means of activism. Through his poetic and ethereal work, Rhein explores multiple facets of the ongoing HIV/AIDS crisis, from personal losses of friends and lovers to the wider decimation of New York’s art and LGBT communities to his own experiences as a long-term survivor. Rhein’s art not only confronts the traumatic history of the crisis, but also opens an essential dialogue about the current and future realities of HIV/AIDS.

Visiting Rhein’s apartment in the East Village, where he has lived since his arrival in New York in 1980, I explore his art-filled space, including a 1981 photograph by Geoff Spear of trans artist Greer Lankton—her hair adorned with a wearable hair sculpture made by Rhein—and paintings by Luis Frangella. There, we discuss the progression of his artwork since his diagnosis, his seminal Leaves piece and the familial inspiration behind his artistic activism.

As shown in his recent solo exhibition The Course of My Life at Johnson & Johnson Headquarters, which traced the trajectory of Rhein’s life and career since his diagnosis with HIV in 1987, Rhein’s artwork evolved after he learned of his status, mirroring the transition in his own life. His intricate sculptural chest piece, “R.O.T.C.,” modeled after the dimensions of his own body, represents the intermediary link between Rhein’s artistic life before and after his diagnosis at 27 years old. “I actually think I had done this piece prior to testing positive. In a way, retrospectively, I had a sixth sense that a transformation was about to happen,” he reveals.

While Rhein admits he was hesitant to disclose his positive status early after his diagnosis, he began to use his artwork as a public examination of illness, loss and his own ideas of spirituality, linked to his personal approach to healing. Employing materials as varied as wire, found books, jewelry, hardware and photography, Rhein’s multidisciplinary artwork investigates the HIV/AIDS crisis through the transcendental and metaphysical relation of the body to nature.

Rhein’s art presents a stable of reoccurring imagery, specifically chosen for its rich metaphorical meanings. Even though, for him, many of these symbols come intuitively, he later considers their multiple connections to his experiences. Take Rhein’s hummingbirds: The Aztecs believed that hummingbirds were reincarnations of warriors; a hummingbird’s weight at 21 grams is equal to the weight the human body is believed to lose immediately after death; more simply, there’s a connection to his mother’s hummingbird feeder.

His most frequently used symbol, though, must be the leaf, and Rhein’s most iconic and poignant artwork is perhaps his ongoing Leaves piece. It’s an overwhelming collection of portraits of friends, lovers and other important figures who passed away from AIDS complications—each portrait done as a wire outline of a unique leaf. Started in 1996, Leaves has grown to over 200 individual leaf portraits, with the most recent completed in 2014.

Rhein conceived of Leaves while at the MacDowell Colony, a prominent art colony in New Hampshire. It was autumn, and Rhein himself was experiencing a near-miraculous transformation back to health thanks to protease inhibitors, which have since rendered his viral load undetectable. Reflecting on that time, Rhein says, “Before, I wouldn’t have been able to go [to MacDowell] because I was so ill and deteriorated. I had four T-cells, I was 127 pounds and I had candidiasis in my bone marrow. By the time I got there—because I was fortunate to get into the study for the protease inhibitors— I had a really rapid return. I had transformed. I was in this state of bliss and light.”

While collecting fallen leaves at the art colony, Rhein felt the presence of his late loved ones surrounding him. He began tracing each leaf in wire as a way to construct a permanent personal memorial to those who died. He continues the process to this day, titling each leaf with the person’s first name and “some poetic reference or attribute.” Leaves includes “Mysterious Robert,” for photographer Robert Mapplethorpe; “Fair Pam,” for a fellow support group member at Friends In Deed; and “Life Altering Spencer,” for activist Spencer Cox. Leaves ranges from world-famous names to lesser-known individuals who were influential in Rhein’s life. “In keeping with my desire to have the piece as an egalitarian presentation,” Rhein says, “I don’t single out noted people from people who were making differences in their lives in ways [that won’t be recorded] on a Wikipedia page.” Nonetheless, his wire portraits will no doubt gain more renown, as Leaves will be featured in the anticipated national exhibition Art AIDS America traveling later this year across the country (For more info, click here). 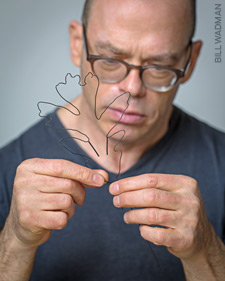 Asked how he assigns the type of leaf to each subject, Rhein responds, “It’s intuitive. It’s not about the species except for some instances.” He gives as an example the portrait “Frank the Visionkeeper,” for the artist Frank Moore, a work Rhein describes as “a broad handsome oak leaf with some instances of decay.” Rhein remembers, “I first met Frank in 1994 and was taken to his loft to be part of the dialogue of how [arts and HIV/AIDS activism organization] Visual AIDS could evolve itself to giving hands-on support to artists. David Hirsch took me there that evening with a handful of artists, activists and arts administrators. Through that introduction to Frank and becoming more involved with helping the archive—seeing him through the years, he maintained his extreme generosity and support. There’s also an interconnectedness with our work. So that happens to correspond with him being an oak, a strong nurturing figure connected to nature.”

Always understanding Leaves as an activist project, Rhein has exhibited it widely including at U.S. embassies in Cameroon, Malta and now Austria, opening a global dialogue about HIV/AIDS and LGBT issues. “Since I started it at MacDowell in 1996,” says Rhein, “I wanted for the piece to be able to go out into the world as an extension of myself and the people I was honoring. They would energetically connect with the world and also give aesthetic pleasure. When people would know what they were about, it could be an activist piece.”

While the vastness and visibility of Leaves occasionally threatens to overshadow the rest of Rhein’s insightful body of work, his compelling photographs also record his and his loved ones’ experiences with HIV/AIDS and sexuality, and his own identity as a long-term survivor. In his stunning photograph “Noon—June 5th, 1996,” Rhein documents an intimate, somber portrait of caretaking and illness, capturing his friend Ken in Rhein’s apartment. Rhein remembers, “It was the summer that the protease inhibitors were transforming me into health while his health was declining. He was eventually able to get into a study. At that moment in time, I was helping him keep going until we both got on better footing.”

Fire Island—a gay vacation mecca a few hours outside New York City—has played an essential role as both a setting for Rhein’s photographs and a location of significance where he has come to terms with life as a long-term survivor. The island appears frequently in many of Rhein’s contemplative photographs such as “Visitation,” which depicts the monarch butterflies’ September migration. “For me, going to Fire Island was this interrelation of a lot of different elements,” Rhein recalls. “Being able to explore socializing with a group of men as a transformed physical person, I was being greeted very much on a physical level where I wouldn’t have been when I was sick. Also I knew that a lot of other men there had experienced the same thing, even though it wasn’t necessarily being talked about. I was alone in some way because people weren’t really sharing it—only sporadically and individually. But I could also go out into nature.”

Even though much of Rhein’s activist tendencies certainly originate from his own experiences with HIV/AIDS, Rhein also credits his uncle Elijah “Lige” Clarke for his conception of activism. Rhein honors the strength of this important figure through a delicate construction titled “Uncle Lige’s Sword.” A former Army private assigned to the Pentagon, Clarke was an early gay rights activist who, with his partner Jack Nichols, co-founded Washington, DC’s Mattachine Society and published the first national gay magazine, GAY.

When Rhein was 11 or 12 years old, he discovered in his mother’s cedar chest a pair of books titled I Have More Fun With You Than Anybody and Roommates Can’t Always Be Lovers: An Intimate Guide to Male-Male Relationships, both written by his uncle and Nichols. Although Clarke was killed in Mexico shortly afterward, the books influenced his nephew’s view of activism. Rhein observes, “Reading them under my covers with a flashlight was my indoctrination into possibilities.”

Opening an intergenerational dialogue about HIV/AIDS between long-term survivors and younger generations of activists, Rhein’s work raises the possibility of art as a living, evolving archive. It’s also an ongoing record of his life, or, as Rhein describes it: “Art is really the experience of life, and the artwork is an artifact from these experiences. I think of art as an indication of that experience, and I continue layering and creating, re-having a dialogue with it.”