A screenshot of the fabricated story designed to look like a CNN news article. CNNEWS3.com

Politifact traces the history of this long-running internet hoax.

Here’s a fake news report that’s truly bananas: CNNews, a website designed to look like CNN, has been running a story with the headline “‘HIV Virus’ Detected In Walmart Bananas After 10 Year Old Boy Contracts The Virus.”

This is 100 percent fake. HIV absolutely cannot be spread by food because it can’t survive outside the human body. Duh.

The CNNews story is not dated, but as Politifact reports, variations of this story have popped up on the internet for several years and can possibly be traced to a Facebook post from November 2015 showing photos of red-streaked bananas that had allegedly been bought in Nebraska and were injected with HIV-positive blood.

That photo in turn was traced to the Facebook account of a Colorado mother who was simply concerned by the discoloration of her son’s bananas. She claims that Del Monte told her the red spots were the result of a common bacteria.

Other versions of this story—or is it now an urban legend?—involve oranges shipped from Libya.

So how did Politifact rate this banana story on its Truth-o-Meter? Pants on Fire!

And to learn the actual facts about HIV, read the POZ Basics, including HIV Transmission and Risk. 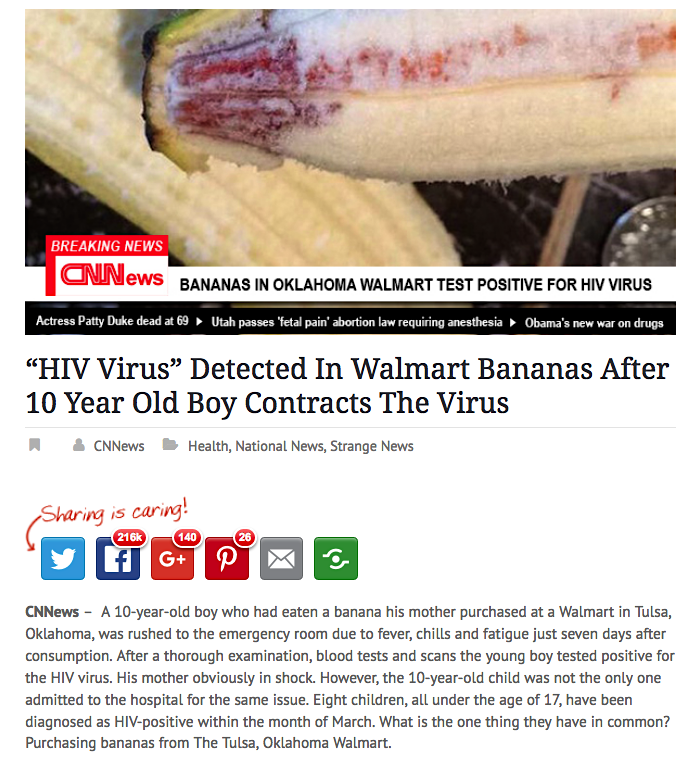 A larger screenshot of the fabricated story designed to look like a CNN news article.CNNEWS3.com