A huge global trial has begun of a long-acting injectable form of the investigational antiretroviral cabotegravir as pre-exposure prophylaxis (PrEP) against HIV.

The Phase III trial, which will ultimately enroll 4,500 HIV-negative transgender women and cisgender men who have sex with men (MSM), will determine whether long-acting injectable cabotegravir given every eight weeks protects against HIV as well as daily oral Truvada (tenofovir disoproxil fumarate, or TDF/emtricitabine).

“We urgently need more HIV prevention tools that fit easily into people’s lives,” Anthony S. Fauci, MD, director of the National Institute of Allergy and Infectious Diseases (NIAID), said in a press release. “Although daily oral Truvada clearly works for HIV prevention, taking a daily pill while feeling healthy can be difficult for some people. If proven effective, injectable cabotegravir has the potential to become an acceptable, discreet and convenient alternative for HIV prevention.”

NIAID is cosponsoring the trial with cabotegravir’s manufacturer, ViiV Healthcare.

Daily Truvada, which was given the green light by the FDA as an HIV prevention tool in 2012, is currently the only approved form of PrEP and likely will remain so throughout the decade.

Another Phase III trial recently began comparing the safety, tolerability and efficacy of daily oral Descovy (emtricitabine/tenofovir alafenamide, or TAF) with Truvada as PrEP. Descovy is an updated version of Truvada that includes a new take on the drug tenofovir that is safer for the bones and kidneys. The first results from that trial are expected in 2019.

Called HPTN 083, the long-acting cabotegravir PrEP trial will be conducted at 45 sites in eight countries in the Americas, Asia and Africa and will include participants 18 years or older who are at high risk for HIV. Results are expected in 2021.

“The annual number of new HIV infections among young people, especially young men who have sex with men and transgender women who have sex with men, has been on the rise despite nearly flat HIV incidence among adults worldwide,” HPTN 083 protocol chair Raphael J. Landovitz, MD, MSc, said in the press release. “It is essential to develop multiple effective HIV prevention modalities so the most vulnerable populations have a choice of preventive options.” Landovitz is an associate professor of medicine at the David Geffen School of Medicine at University of California, Los Angeles.

The reason for switching the participants back to daily oral Truvada as PrEP is to provide protection against the potential for emerging drug resistance while cabotegravir slowly dissipates from the body. Long-acting cabotegravir has a very long “tail”; recent research found that the drug may linger in the body for more than a year in some people after they stop receiving the injections. After the drug has dropped below levels in the body that provide maximum protection against HIV, an individual could potentially contract the virus; at that time, there may still be enough drug in the body to give rise to virus that is resistant to it. Drug resistance can limit future HIV treatment options.

The participants will receive HIV prevention counseling, condoms, lubricant and counseling to encourage adherence to the daily oral pill. They will receive regular sexually transmitted infection testing and referral to STI treatment if necessary. Routine HIV testing is also part of the study protocol. Those who test positive will stop receiving the study drug and placebo and will be referred to care and treatment for the virus.

Another study, HPTN 084, will test the safety and efficacy of long-acting injectable cabotegravir as PrEP among young women in sub-Saharan Africa starting in 2017.

For more information on the HPTN 083 trial, including the contacts of those running the trial sites in 15 U.S. cities for individuals interested in participating, click here. 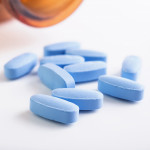