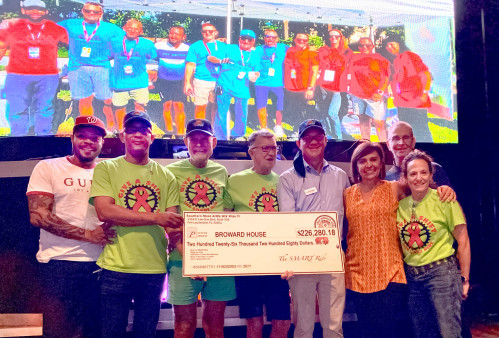 The new year is off to a great start for five HIV organizations in Florida: They received checks totaling nearly $1.23 million, the amount raised in November during a local HIV/AIDS fundraising bike ride.

The annual Southern Most HIV/AIDS Ride (the SMART Ride) takes place over two days in November, with a route spanning 165 miles, from Miami to Key West, making it the second largest AIDS bike ride in the country. Each year, between 400 and 500 participants join the effort and bring in donations from nearly 10,000 people. According to its website and Facebook page, the ride has raised over $12.4 million for local AIDS services since 2003.

Thank you to all the riders, crew, and donors who helped make @TheSMARTRideFL18 such a huge success! Compass was awarded $205,208.18 to helped those living with and impacted by #HIV/AIDS in Palm Beach County! pic.twitter.com/B8Hm138Ce7

After a hiatus due to COVID-19, the traditional in-person ride returned in 2021. SMART Ride 18 raised $1.23 million, all of which, according to the group, goes to support Florida HIV/AIDS services.

The five beneficiaries of SMART Ride 18 are:

To celebrate the ride’s success, the group held a check distribution party January 9 at a venue in Wilton Manors. You can watch a video of the event in the Facebook post below.

Wilton Manors Commissioner Chris Caputo has been participating in the ride for a decade. “Today marks the completion of my 10th SMART Ride and 1,650 miles later, I am still living with HIV,” Caputo told South Florida Gay News in November. “We haven’t been able to fully prevent new infections, let alone cure the disease. People in our most marginalized communities continue to die due to a lack of access to care and education. It’s heartbreaking. There is more work to be done. We can’t stop before the finish line, so each year we ride, and every year I am glad I did.”

SMART Ride 19 is already on the books this year for November 18 and 19. Visit TheSMARTRide.org to register and learn more.

In a related story, SMART rider Uli Schackmann took her cycling and AIDS advocacy to another level in 2017 by riding from Alaska to Florida, with her dog, Jackson, to raise money for amfAR, The Foundation for AIDS Research. Read about in “Uli’s Amazing Journey.”

Click #AIDS Bike Ride to learn about similar community fundraisers, including Cycle for the Cause and the AIDS/LifeCycle event.