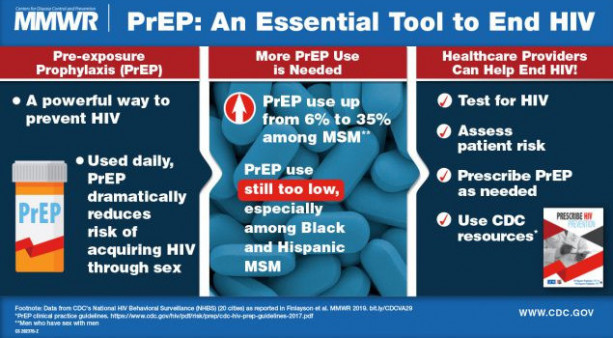 PrEP use increased across regions and demographic groups but remains lower among Black and Latino men.

Nine out of 10 gay and bisexual men at high risk for HIV in U.S. cities are aware of pre-exposure prophylaxis (PrEP), and over a third were using it in 2017—up from just 6% five years ago—according to new figures from the Centers for Disease Control and Prevention (CDC) published this week.

But despite these promising advances, at-risk Black and Latino men who have sex with men (MSM) are less likely to know about PrEP and less likely to use it compared with white and Asian men.

“HIV PrEP awareness and use is increasing in the United States among MSM who are at risk for acquiring HIV, but higher coverage is needed, especially among Black and Hispanic MSM, to end the HIV epidemic in the United States by 2030,” the report authors concluded. “By routinely testing their patients for HIV, assessing HIV-negative patients for risk behaviors and prescribing PrEP as needed, health care providers can play a critical role in this effort.”

The Food and Drug Administration approved once-daily Truvada (tenofovir disoproxil fumarate/emtricitabine) for HIV prevention in 2012. Since then, the number of people using PrEP has risen steadily. This upswing may accelerate now that the U.S. Preventive Services Task Force (USPSTF) is advising health care providers to offer PrEP to men and women at high risk of acquiring HIV—a move that will require public and private insurance to cover it.

CDC researchers previously reported that in 2015, over 1.1 million people in the United States were at substantial risk of acquiring HIV but only 8% of eligible individuals were using PrEP, falling to just 3% among Latinos and 1% among African-Americans—the group with the highest rate of new infections.

Since then, advocates, community-based HIV organizations and city health departments have made a major push to increase PrEP awareness and use among people at risk—especially gay and bi men—and these efforts appear to be paying off.

As described in the CDC’s Morbidity and Mortality Weekly Report, CDC researcher Teresa Finlayson, PhD, MPH, and colleagues analyzed changes in PrEP awareness and use among at-risk men who have sex with between 2014 and 2017, using data from the National HIV Behavioral Surveillance system.

The researchers interviewed 7,873 HIV-negative gay and bi men at high risk of acquiring the virus, recruiting them at bars and other venues popular with gay men. Eligible participants had an HIV-positive male partner, had two or more male partners in the past year or had a sexually transmitted infection in the past year.

Importantly, because this was a survey of urban men who frequent gay venues, it is not representative of the entire national population of men who have sex with men.

Although PrEP awareness rose in all population subgroups, in 2017, it remained lower among Black men (86%) and Latino men (87%) compared with white men (95%) and “other” men, including Asians, Pacific Islanders and Native Americans (94%). Men ages 18 to 29 and those age 30 or older were similarly likely to know about PrEP (91% and 90%, respectively).

By region, PrEP awareness was highest in the West (96%), followed by the Northeast and South (both 90%) and the Midwest (81%). Standout cities with rates of 95% or higher included Boston, Los Angeles, New Orleans, New York City, San Francisco, Seattle and Washington, DC.

Men with a college degree (94%) or some college or vocational education (91%) were more likely to be aware of PrEP than those with a high school education or less (81%). Men who identified as gay were more aware than those who identified as bisexual (92% and 81%, respectively), with the lowest rate seen among those who said they were heterosexual (60%). Men who had recently been tested for HIV had a high level of PrEP awareness compared with those who weren’t tested within the past year (93% versus 75%).

PrEP use was higher among men with more income, more education and greater access to the health system. Among those who had seen a health care provider within the past 12 months, PrEP use rose to 39%. PrEP was most often obtained from a doctor or health maintenance organization (42%), followed by clinics and health care centers (37%). Among men with health insurance, 39% said they used PrEP compared with 19% of uninsured men, suggesting the cost of Truvada remains a barrier.

To address barriers that affect access to quality health care, the CDC has started the Targeted Highly-Effective Interventions to Reverse the HIV Epidemic (THRIVE) program. With demonstration projects now under way in seven heavily impacted cities, the program aims to establish community collaboratives to provide comprehensive HIV prevention and care services for Black and Latino men who have sex with men, according to the report authors.

Mathematical models predict that the 30% to 40% PrEP coverage rate seen in this study could prevent about a third of new HIV infections over a 10-year period.

“The reported increase in PrEP use among men who have sex with men is promising, but higher coverage is needed to reduce incidence of new infections by 90% within the 10 years of the Ending the HIV Epidemic initiative,” a goal set by the Trump administration earlier this year, the CDC authors concluded.

The authors noted that some health care providers might be missing opportunities to provide PrEP to their patients who would benefit, given that even among at-risk gay and bi men who had seen a provider in the past year, fewer than one in four were using PrEP. To address this gap, the CDC launched the Prescribe HIV Prevention campaign, which offers an online tool kit to help providers discuss sexual histories, assess the need for PrEP and feel comfortable prescribing it.

“To fulfill their critical role in reducing new HIV infections in the United States, health care providers will need to routinely test patients for HIV, link those with HIV infection to care and discuss HIV prevention options (e.g., condoms and PrEP) with those who are not infected,” they wrote.