Disruptions in access to antiretroviral treatment due to the COVID-19 pandemic could lead to a major setback in combating HIV.

Concerted efforts to drive up rates of HIV diagnosis and treatment worldwide have achieved steady success in recent years, with an estimated two thirds of the global population of people living with the virus receiving antiretroviral (ARV) treatment in 2019.

However, progress has been uneven, according to the Joint United Nations Programme on HIV/AIDS (UNAIDS), which released its annual report on the state of the HIV pandemic on Monday at the opening of the International AIDS Conference, held virtually this year.

While the annual rate of HIV transmission has fallen impressively in hard-hit Eastern and Southern Africa over the past decade, it has risen in Latin America, North Africa and the Middle East, and East Asia and Central Europe.

“The AIDS pandemic remains a global crisis that is fueled by inequalities,” Shannon Hader, MD, PhD, deputy executive director of UNAIDS said in a teleconference with journalists last week. “We have to double down to overcome these inequalities.” 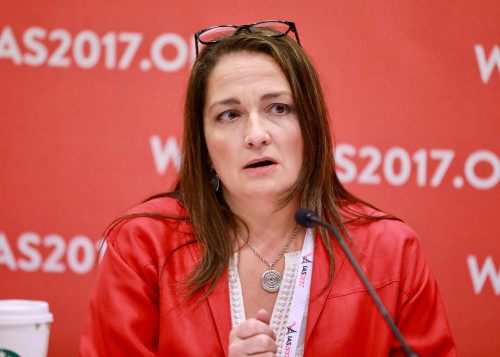 Concerningly, disruptions to ARV treatment access due to COVID-19 restrictions threaten to cause 100,000 or more excess AIDS-related deaths in sub-Saharan Africa by 2021.

“We need to make sure that COVID-19 doesn’t blow us completely off course,” Hader said.

UNAIDS’s new report projects that if COVID-19–related restrictions in sub-Saharan Africa drive a 20% disruption in access to ARVs for people with HIV that lasts six months, this would lead to 110,000 additional deaths by 2021. If ARV access were completely interrupted for six months, a projected 560,000 extra deaths would occur—a near doubling of the expected number of deaths from AIDS-related complications.

UNAIDS estimates that through 2019, 75.7 million people worldwide have contracted HIV, 32.7 million of whom have died of AIDS-related illnesses.

All subsequent figures are estimates, and all current figures refer to 2019. 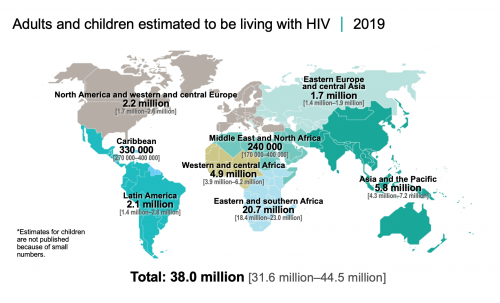 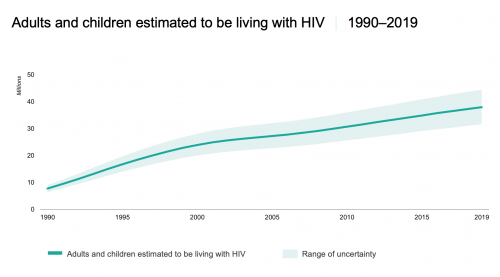 In 2009, just 6.4 million people with HIV were on treatment for the virus. Today, 68% of adults with the virus are on ARVs, while the treatment rate is only 53% among children younger than 15. Eighty-five percent of pregnant women living with HIV have access to ARV medication to prevent transmission of the virus to their child.

The global epidemic as a whole still has a ways to go before hitting those targets. Currently, 81% of people living with HIV know their status, 82% of that group is accessing treatment and 88% of that group has a fully suppressed viral load. That means 59% of all people with HIV have an undetectable viral load. 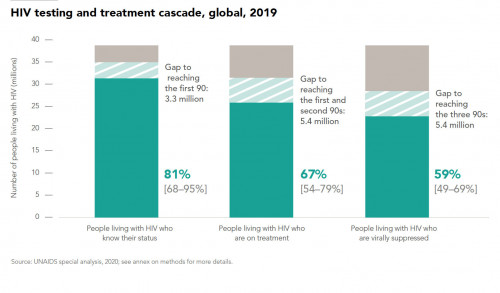 However, 13 nations already have hit the 90-90-90 targets—Sweden was the first to do so, in 2016—and another five are expected to do so by the end of this year.

Since the global annual rate of HIV transmission, or incidence, peaked in 1998, the rate has declined by 40%. In 2019, 1.7 million people contracted the virus, compared with 2.8 million 21 years prior. 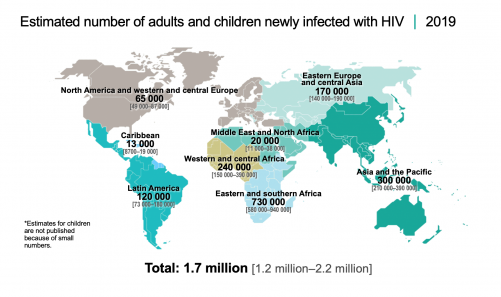 HIV incidence has declined by 23% since 2010, when 2.1 million people contracted the virus. 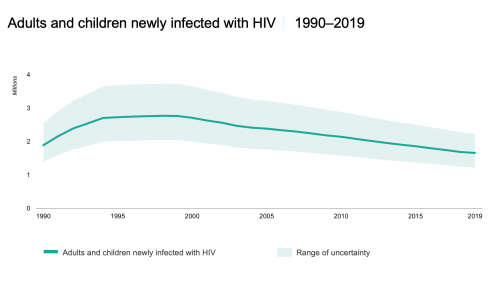 AIDS-related illnesses remain the leading cause of death among women of reproductive age worldwide. 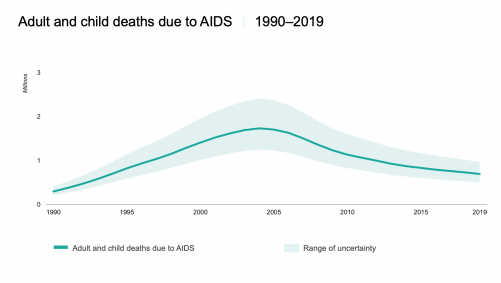 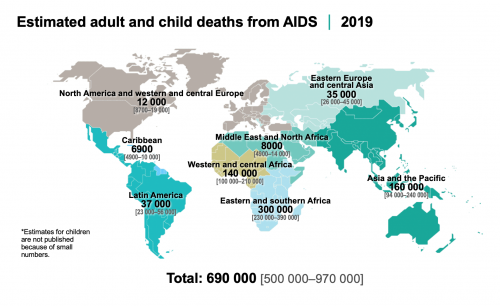 UNAIDS has also projected that COVID-19–related lockdowns and border closures could increase the cost of exported ARVs from India by 10% to 25%. Globally, a large proportion of people with HIV in low-income nations rely on generic medications from India.

If the new pandemic leads to impeded access to ARVs for pregnant women with HIV, this would lead the rate of mother-to-child transmission of the virus to increase 2.62-fold in Malawi, 2.39-fold in Uganda, 2.06-fold in Zimbabwe and 1.83-fold in Mozambique, UNAIDS projects.

International funding for the efforts to combat HIV is waning even as a scale-up is needed to save money in the long run. At the end of 2019, $18.6 billion was available for the response in low- and middle-income nations, nearly $1.3 billion less than in 2017. UNAIDS believes that $26.2 billion is needed for a sufficient response in 2020.

Eastern and Southern Africa are driving global progress in reducing HIV incidence, with a 38% decline in annual transmissions since 2010. South Africa alone has seen its HIV incidence cut in half since then.

Since 2010, HIV incidence has risen by 21% in Latin America and by 21% in the Middle East and North Africa.

Eastern Europe and Central Asia, including the Russian federation, have seen a staggering 72% increase in HIV incidence since 2010, from about 60,000 to 160,000 new annual transmissions. Today, 99% of new infections in this region are among key populations. UNAIDS cites a high level of stigma toward LGBTI people as a major driver of HIV transmission in this part of the world.