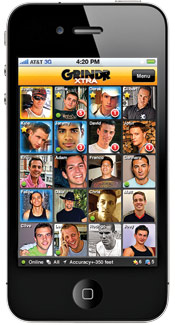 In China, HIV cases are rising fastest among gay men. Aids Concern spokesperson Panda Cheung Yin-mei tells China Daily that mobile apps make it easier for guys to meet and have sex—but “the real problem is that schools do not encourage homosexual sex education.”

What’s the best way to recruit high-risk gay men for HIV studies? In 2010, Los Angeles researchers were looking for guys to enroll in a rectal microbicide study; as they reported in the journal AIDS and Behavior, they found one particularly good recruitment tool: Grindr.