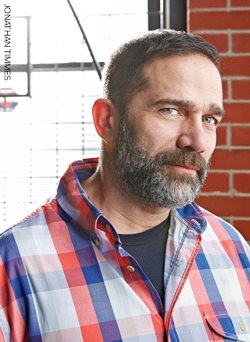 ACT UP pioneer and longtime HIV treatment activist Moises Agosto graced the cover of POZ in 1997 as one of the strongest HIV-positive Latino voices in the early AIDS epidemic. Eighteen years later, he remains a force to be reckoned with.

Agosto, now 50 years old, is director of treatment education, adherence and mobilization at the National Minority AIDS Council (NMAC). For years, he has used his expertise about the science of HIV, as well as his knowledge of minority health issues, to speak out against the “gay white male dominance” of the AIDS response.

In his early advocacy, Agosto was equally at home protesting on the streets as he was schmoozing at the White House to further the cause. His focus has now shifted to a new frontier of activism—one that includes modern ideas of HIV treatment as prevention and the importance of outreach to communities of color, who are still drastically underrepresented in HIV treatment and cure research.

“When I was working on this in the 1980s, I was a young gay man in a very different context,” says Agosto, who was diagnosed with HIV in 1986 at the age of 20 in his birthplace of San Juan, Puerto Rico. Soon after testing positive, Agosto moved to New York City and then eventually to his current hometown of Washington, DC, which allowed him to get involved with nearly all the early heavy-hitters in the national AIDS response.

In addition to ACT UP and NMAC, Agosto has served in many advocacy roles at groups like the AIDS Treatment Data Network, the People With AIDS Coalition and the Treatment Action Group.

As a long-term survivor, Agosto regards his early activism as a major influence on what he’s doing today. “When I think back about the friends I have lost—we were all waiting on the new treatments, but they didn’t make it,” recalls Agosto. “It’s weird to explain, but I feel some kind of commitment, because I was the lucky one.”

Despite being diagnosed with AIDS in 1995, Agosto now celebrates the undetectable viral load he has achieved for 12 years running. His good health allows him to remain active. Case in point: In July, he attended the 8th International AIDS Society Conference on HIV Pathogenesis, Treatment and Prevention in Vancouver, British Columbia, as both a speaker and a listener to exciting new insights about potential HIV cures.

However, Agosto says he will never forget about his commitment to minorities living with HIV/AIDS, specifically men who have sex with men (MSM) and transgender women of color.

Simply put, he says, even with all of the exciting new treatment research and biomedical prevention tools, the fight against HIV/AIDS is all about one thing: “Access, access, access.” Plus, he notes, “If we still can’t even find those who are infected, we will be running in place.”