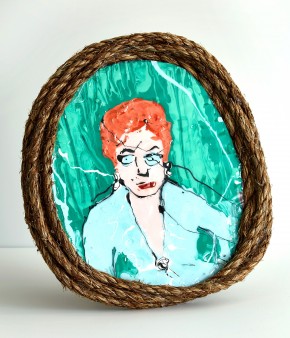 Artist and designer Doug Meyer is also a bit of a history buff and an educator, as you can see in his latest project, Heroes Tour 2016, a series of 50 portraits of creative icons lost to AIDS in the ’80s and ’90s. “I wanted young people to learn how amazing these people were and how they paved the way,” Meyer says of the roster, which includes fashion designer Perry Ellis, supermodel Gia Carangi, filmmaker Derek Jarman and Brady Bunch actor Robert Reed.

After researching each subject, Meyer created a portrait that connects with that person’s life and legacy. The results—including works composed of plastic, paint, papier-mâché, terra-cotta and other materials—are displayed alongside obituaries of the subjects. “Because there was so much stigma,” Meyer notes, “many of the obits don’t even mention AIDS.”

The project began as a series of 19 sculptures for a 2015 fundraising event for DIFFA: Design Industries Foundation Fighting AIDS. Right away, Meyer wanted to do more, and he wanted them to travel. After being exhibited in New York and Miami, the collection is heading to Los Angeles, Chicago and San Francisco, with Meyer creating additional portraits of local creative icons for each city. The individual works are for sale, and a portion of the proceeds goes to AIDS organizations in the host city.

Meyer’s most challenging portrait was choreographer Alvin Ailey. “To me, his dance was very architectural and structural, all about balance,” says Meyer. The solution was to photograph vintage building blocks doing balancing acts and then print the images in an accordion foldout. “It ended up being one of my favorite pieces,” he says.

Meyer, 54, who moved to New York City in the ’70s and attended Parsons School of Design, says he knew many of his subjects, such as Haoui Montaug, a nightclub doorman who, when he became seriously ill, held a suicide party (Madonna phoned in to pay her respects). “Everyone was dying so fast,” Meyer recalls. “You didn’t have drug cocktails making HIV controllable. Young people have no idea.” Maybe now they will.

You can view a larger selection of Heroes portraits in the POZ Staff Blog here.