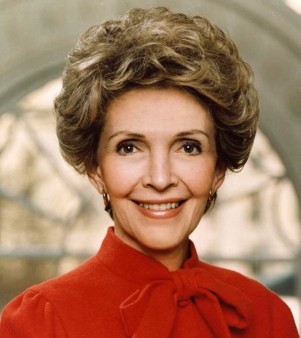 UPDATE: Hillary Clinton has issued a more detailed apology, scroll to the bottom to read an excerpt.

In speaking to MSNBC regarding Nancy Reagan’s funeral on Friday, March 11, Hillary Clinton praised the former first lady and Ronald Reagan for their work in AIDS advocacy. Specifically, Clinton said:

“It may be hard for your viewers to remember how difficult it was for people to talk about HIV/ AIDS back in the 1980s, and because of both President and Mrs. Reagan, in particular Mrs. Reagan, we started a national conversation, when before nobody would talk about it, nobody wanted to do anything about it. That too is something I really appreciate—her very effective, low-key advocacy. But it penetrated the public conscious, and people began to say, ‘Hey, we have to do something about this too.’”

Immediately, the Internet exploded with corrections and pushback.

“Hillary Clinton is dead wrong about Nancy Reagan and AIDS,” wrote the New Republic, adding, “Just how ‘low-key’ was Nancy’s advocacy? So low-key that most people would characterize it as not advocacy at all. After the disease’s first cases were identified in 1981, President Reagan waited until 1987, almost at the end of his second term, to speak publicly about the disease. His communications director, Pat Buchanan, described AIDS as “nature’s revenge on gay men.”

AIDS and LGBT advocates were fast to take to Twitter and correct Clinton:

Dear @ChelseaClinton: Please ask your mom to join you for a screening of How To @SurviveAPlague tonight. #TheReagansLetUsDie

Sorry Hillary,You mean well but nothing could be further from the truth than Nancy Reagan (RIP) started a national conversation on AIDS

Soon afterward, the Clinton camp was fast to apologize for misspeaking:

Hillary Clinton’s statement on her comments about the Reagans’ record on HIV and AIDS: pic.twitter.com/RtIs0zpJfk

One thing is for certain, Clinton certainly helped start a conversation about AIDS on March 11, 2016. You can too, by letting us know your thoughts about this issue.

UPDATE — An excerpt from her more detailed apology, which she released March 12:

“At Nancy Reagan’s funeral, I said something inaccurate when speaking about the Reagans’ record on HIV and AIDS. Since then, I’ve heard from countless people who were devastated by the loss of friends and loved ones, and hurt and disappointed by what I said. As someone who has also lost friends and loved ones to AIDS, I understand why. I made a mistake, plain and simple.

“I want to use this opportunity to talk not only about where we’ve come from, but where we must go in the fight against HIV and AIDS.

“To be clear, the Reagans did not start a national conversation about HIV and AIDS. That distinction belongs to generations of brave lesbian, gay, bisexual, and transgender people, along with straight allies, who started not just a conversation but a movement that continues to this day ...

“I believe there’s even more we can — and must — do together. For starters, let’s continue to increase HIV and AIDS research and invest in the promising innovations that research is producing. Medications like PrEP are proving effective in preventing HIV infection; we should expand access to that drug for everyone, including at-risk populations. We should call on Republican governors to put people’s health and well-being ahead of politics and extend Medicaid, which would provide health care to those with HIV and AIDS.

“We should call on states to reform outdated and stigmatizing HIV criminalization laws. We should increase global funding for HIV and AIDS prevention and treatment. And we should cap out-of-pocket expenses and drug costs—and hold companies like Turing and Valeant accountable when they attempt to gouge patients by jacking up the price of lifesaving medications.”