HIV Epidemics Among Gays and Drug Users Are Less Likely to Get U.S. Aid

The U.S. President’s Emergency Plan for AIDS Relief (PEPFAR) gives aid disproportionately to countries with epidemics generalized among risk groups compared with those with epidemics concentrated among men who have sex with men (MSM) or injection drug users (IDUs). Investigators followed up previous research that made the same finding about PEPFAR spending during 2009 to 2010, basing their new analysis on 19 nations and four regions with available data on MSM and IDUs. They presented their findings at the 21st International AIDS Conference in Durban, South Africa (AIDS 2016).

The data on funding came from the Country Operational Plans database created by amfAR, The Foundation for AIDS Research. The sample analyzed represented 67 percent of all PEPFAR funding.

Compared with spending during 2009 to 2010, 2010 to 2014 PEPFAR spending for countries with transmission primarily among MSM or IDUs increased by 40.4 percent; for countries with transmission primarily among MSM, IDUs and heterosexuals spending increased by 30.3 percent. Nevertheless, the countries with the first category of epidemic received $140 million less in PEPFAR funding, while those in the second category received $153 million less than those with generalized epidemics after the researchers adjusted the data for various factors. 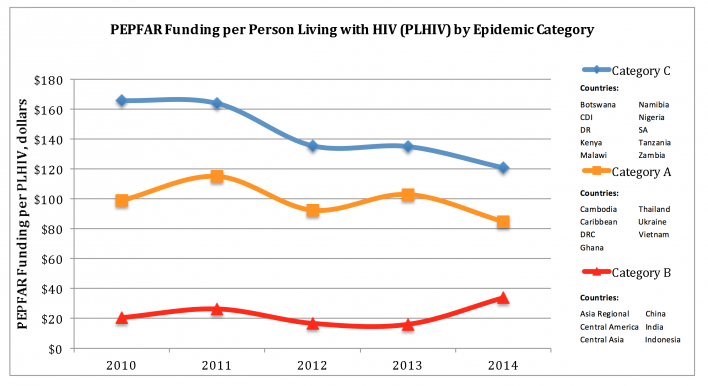