Detail from the FCAA 2018 report FCAAIDS.ORG

Plus: Top 10 philanthropic funders of HIV, according to the latest report from Funders Concerned About AIDS.

Private philanthropic funding for HIV-related causes increased $13 million between 2017 and 2018. At first glance, this might seem like good news. But a deeper dive into the global data reveals a troubling trend: Funding to fight the epidemic has “remained relatively flat.” Or worse: The numbers illustrate “the reality of the steady retreat from HIV by broader philanthropy.” 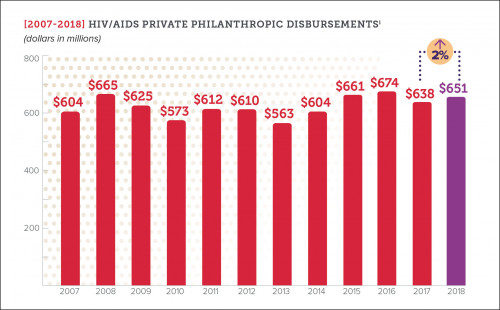 Detail from the report “Philanthropic Support to Address HIV/AIDS in 2018”FCAAIDS.ORG

The report gathers data on grants listed by nearly 80 funders that, together, represent about 93% of total funding. The report also looks at information about grants on websites, 990 forms, annual reports and similar documents.

Big numbers from the report include:

The top 10 philanthropic funders of HIV/AIDS-related causes include:

According to the report, notable changes in 2018 include: 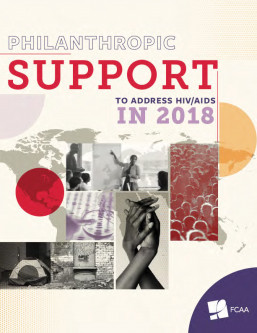 In the report’s overview, the authors write:

A key headline from this year’s report—much like previous years—is that HIV-related private philanthropy is concentrated among an increasingly small number of funders.… Notably, the 2018 increase was mostly driven by a few funders in that top 20, in particular by a $29 million rise in giving from the Wellcome Trust. To further illustrate the concentration at the top, the threshold for making it onto the top 20 list has dropped below $4 million, whereas only two years ago a funder had to give over $7 million to qualify for the list.

The almost 40-year fight against HIV and AIDS has been marked with a series of evolving strategies, priorities and deadlines. With each scientific or treatment breakthrough came the hope that we were closer to the end of the epidemic. This “ending AIDS” paradigm was intended to grow resources and seize an opportunity to leverage tremendous progress. But even if the end of AIDS is scientifically possible, we need to examine if that framing is spurring resources or breeding complacency. Further, as we increasingly recognize the intersectional nature of HIV, we better understand our task not just as stopping a virus, but also addressing the social and political factors that have fueled it.