The statement demands better care and more representation for an aging population living with HIV.

To mark National HIV/AIDS and Aging Awareness Day on September 18, a group of HIV long-term survivors and advocates has released the San Francisco Principles, a statement outlining the challenges of aging with HIV and the need for better care and more representation.

Reminiscent of the 1983 Denver Principles—one of the first statements of self-empowerment by people living with AIDS—the new document calls for inclusion of long-term survivors in policy decisions, demanding “Nothing About Us Without Us.” 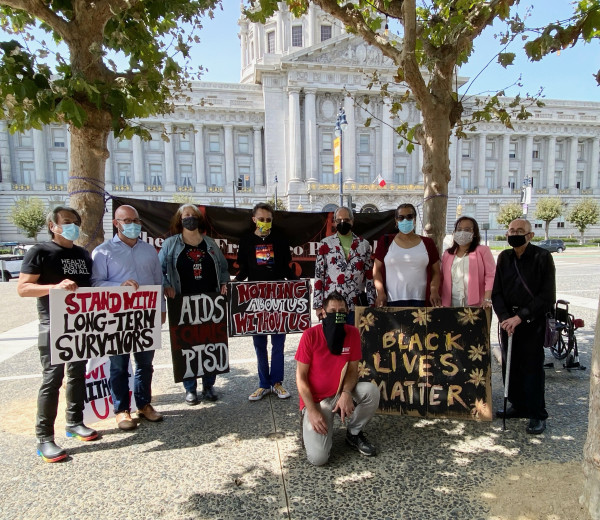 “[We] were diagnosed with HIV before 1996, when diagnosis was tantamount to a death sentence. We who survived are now in our 50s, 60s and beyond, living lives we never expected to have,” coauthor Hank Trout, a community activist and senior editor for A&U magazine, said during a press conference outside San Francisco City Hall. “We have borne the brunt of the AIDS pandemic…We endured the life-changing trauma of burying our friends, our lovers, our coworkers and our family for two decades—many of us buried our entire circle of friends. We put our bodies on the line as unpaid guinea pigs…All the while, we were ignored by public health officials, laughed at by politicians, condemned by religious leaders and ostracized by HIV stigma. Sometimes, sadly, even in our own communities.”

Experts predict that by 2030, at least 70% of people living with HIV will be over 50. In San Francisco, the percentage has already reached 69%, according to the city’s latest HIV Epidemiology annual report. In New York City, the estimated percentage is 58%.

“As we age with HIV, we face the debilitating physical and mental health effects of aging at an accelerated rate,” Trout continued. "Even though we make up over 50% of adults living with HIV in the U.S., we are nowhere to be found in state or national AIDS policies. The president’s Ending the HIV Epidemic program doesn’t even include us…We survivors in San Francisco set the global standard for compassionate care for people living with HIV and AIDS, and we intend to do the same for long-term survivors."

The preamble to the San Francisco Principles gives voice to the feeling of neglect as the focus in the HIV/AIDS field has shifted to prevention.

“We live with a sense of having been forgotten, shoved to the side by AIDS researchers and service providers, unknown to geriatricians. We survivors are routinely ignored at HIV/AIDS conferences, while funding for research and services is consumed by prevention techniques and programs,” it reads. “While we recognize the importance of prevention, and heartily support the goal of ending the AIDS pandemic, we insist that prevention not drain resources from caring for those of us who have lived with HIV for thirty, thirty-five, forty years.”

Trout and other long-term survivors met via Zoom after this summer’s International AIDS Conference, which was slated to take place in San Francisco and Oakland but was transformed into a virtual event due to COVID-91. Noting that few sessions were devoted to long-term survivors, the group looked to the Denver Principles for inspiration in seeking greater inclusion, Trout told the Bay Area Reporter.

Other members of the group that launched the San Francisco Principles—six long-term survivors, a community activist and a health care provider—also spoke at Friday’s press event.

“I was diagnosed May 15, 1985. As I stand here today, I’m really not supposed to be alive, not only being HIV positive, but also being a Black trans woman. But God damn it, I’m 62 and I’m proud!,” said Ms. Billie Cooper, a member of the San Francisco AIDS Foundation’s TransLife support group and the Shanti Project. “I’m here today to say, as a long-term survivor, we still have a long way to go. Some of my sisters are still not in treatment…When my Black trans sisters were dying in the 80s and 90s, alongside the white boys, we weren’t getting services…We were overlooked and underserved. So let’s stop all this madness because Black trans lives matter.”

Several speakers noted the host of additional illnesses people with HIV are facing as they age—sometimes years earlier than their HIV-negative counterparts—and the difficulties they encounter trying to get adequate insurance coverage and appropriate care. In addition, many are dealing with depression, posttraumatic stress disorder, homelessness and substance use, and far too many have considered or succumbed to suicide.

“All of us long-term survivors have been dealing with death every single day of our lives for the last 40 years, whether it’s watching a friend wither away and die or wondering whether it’s our turn…Living day to day with that kind of loss, that kind of grief and that kind of trauma takes its toll,” said writer, filmmaker and advocate Paul Aguilar. “I have friends who have survived HIV only to develop cancer and liver and kidney and heart disease…and what’s far worse is that too many of my peers have chosen suicide because they see no future in a life where they feel forgotten and nobody seems to care anymore. Thirty years ago, we were overlooked by the medical establishment, ignored by the government and shunned by society. We will not allow that to happen again.”

The San Francisco Principles includes the following list of demands:

The principles have been endorsed by around 150 people so far, and new supporters are welcome to sign on. 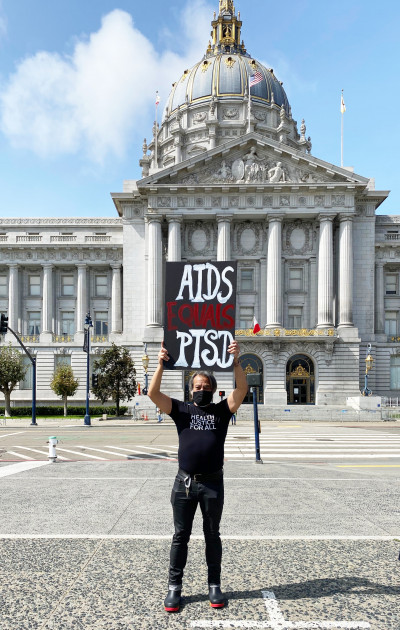 “As a small group, we know we can’t speak for everyone, but never doubt that a handful of committed individuals can change the world and get spectacular results,” said Vince Crisostomo, newly named director of aging services at the San Francisco AIDS Foundation. “We are resilient, we are proud, and in that pride there’s an incredible mix of beauty and pain that we stand in simultaneously.”

“The San Francisco Principles of 2020 come six months into living through the second pandemic of our lives and, then as now, there are so many things we can’t control,” he continued. “There’s so much needless suffering due to systems and leadership that do not serve us. Those we can address through the lessons that have been learned. Our hope is that the principles do just that. We learned the hard way. And now with COVID-19, we have an opportunity to maybe get right what we didn’t get before.”

Click here to read and endorse the San Francisco Principles.

Click here for more news from POZ about long-term survivors.