HIV Contributes to Lung Cancer Risk, but Not Nearly as Much as Smoking

Researchers have long known that people with HIV are more likely to get certain cancers, such as Kaposi’s sarcoma, especially when their CD4 cell counts drop. They are called AIDS-related cancers (ARC), and the rates of these opportunistic illnesses have fallen dramatically since the introduction of combination antiretroviral (ARV) therapy in the late 1990s.

Other cancers, such as lung cancer, have not traditionally been associated with HIV, but studies conducted during the past couple of years have indicated that people with HIV might be at increased risk of developing such cancers, especially as they live longer and contend with other disease risk factors.

To determine whether HIV adds to the risk of developing lung cancer, Keith Sigel, MD, MPH, from Mount Sinai School of Medicine in New York City and his colleagues examined the medical records of people receiving care through veterans administration (VA) clinics and hospitals. So that accurate rates of smoking history could be factored into the study—previous studies on lung cancer in HIV have not controlled for this aspect very well—Sigel’s team focused on veterans who had also filled out a 1999 survey on tobacco use.

In all, Sigel and his colleagues narrowed down a database of more than 100,000 veterans to 3,707 HIV-positive and 9,980 HIV-negative participants. The median follow-up was eight years. Basic characteristics between the two groups were similar. The median age of both groups was 47; many were non-white and 98 percent were male. With respect to smoking, the two groups differed somewhat. HIV-positive participants were more likely to smoke currently or to have quit smoking only recently.

There were just over 200 diagnosis of lung cancer in both groups combined during the follow-up period.

Interestingly, Hispanic participants were less likely to develop lung cancer than white or black participants, and the author commented that this has been found in several other studies.

Sigel acknowledged that they were not able to determine whether ARVs influenced the development of lung cancer. The rates of some types of cancers decrease when ARV therapy increases CD4 cells and controls viral replication.

Sigel stated that segmenting people into groups (such as non-smokers, occasional smokers, recently quit smokers and smokers who’d quit less recently) has been validated in other studies to produce a good assessment of a person’s lung cancer risk. He said, however, that determining the actual quantities of cigarettes a person has smoked recently, or ever, would have given an even more detailed picture of smoking’s influence on lung cancer risk. 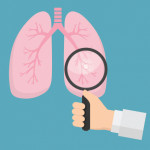