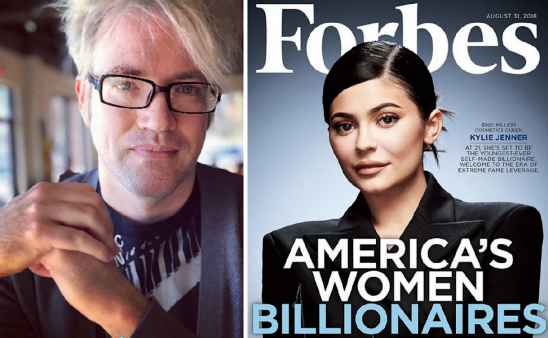 When POZ blogger Shawn Decker posted his thoughts about the Kylie controversy, he earned a whole lot of likes—while educating about HIV.

On its latest cover, Forbes magazine designated Kylie Jenner as being on pace to become “The Youngest-Ever Self-Made Billionaire.” Unsurprisingly, this claim landed the reality TV star at the center of another social media storm. Only this time, Jenner’s achievement became an opportunity to educate about HIV, thanks to POZ blogger and former cover guy Shawn Decker.

Here’s how it all unfolded, and what Decker—the author of My Pet Virus—has to say about going viral.

Kylie Jenner is on track to become the youngest self-made billionaire ever, ahead of even Mark Zuckerberg, who became a billionaire at age 23. Click the link in our bio to find out how she built a $900 million fortune in less than 3 years. #SelfMadeWomen

When the Forbes article came out, many readers took to the internet to express dismay that Jenner was labeled a “self-made” billionaire despite her family’s affluence. (In case you’ve been in a coma this century, Jenner is one of the younger siblings on Keeping Up With the Kardashians, on which she stars alongside older sister Kim Kardashian West and transgender parent Caitlyn Jenner; Kylie Jenner is also a model, spokesperson, cosmetics entrepreneur and social media personality.)

In response to the news of Jenner’s fortunes, the New York Daily News snarkily asked in a tweet: “What are you doing with your life?”

That tweet (included below) generated a landslide of replies—one of the most viral from Decker, who replied to the Daily News by telling his HIV story.

I was diagnosed with HIV at age 11 in 1987. My parents were told I had 6 months-to-2 years to live. I’m turning 43 on Monday and I’ve spent the last two decades of my life educating about HIV through writing, speaking and laughter. https://t.co/DEbD4c7kil

Decker travels the country with his wife, Gwenn Barringer, as a serodiscordant couple (meaning one of them has HIV, the other doesn’t) to educate about HIV. In his Jenner tweet, Decker wrote about his diagnosis as a child and his life of activism, elaborating in subsequent tweets.

The result was a flood of interest—the tweet garnered 262,000 likes and 64,000 retweets—and counting!

Decker made sure to defend Jenner, saying he was mostly “poking more fun” at the Daily News. He also explained that if her head start was being born into a wealthy family, his was “a loving family, decent health care and enough luck to live to see the advent of effective medication.”

That is such an interesting a good way to think about it—there are many forms of head starts that allow us to have good lives :-)

Many of the responses to Decker’s tweet were positive; they also gave him a chance to answer questions about his journey as well as to offer support to those who connected with his story.

My neighbor lost his wife just last month. He his HIV positive, so with his three children. He has already lost three of his children at age 7 to 16 months. He isn’t opportune to have all the supports you have. HIV is deadly in Africa.

Thanks for your impacts.

Decker took a few moments from answering DMs to respond to a few questions from POZ.

What has been the overall response to your tweet?

The overall responses to the tweet have been great. Very supportive.

Do any stand out to you?

The responses where people share their stories of how HIV has impacted them personally. Some are stories about having a loved one who passed years ago; others are about a cousin thriving with the virus today. It’s just every situation imaginable. And then there are the ones with a wink and a nod, like, “You have helped a friend of mine more than you can know.” I know I’m just a blip on the radar. But the hope as an educator is that some little seed I plant has a positive change in someone’s world. I had that kind of help along the way, that’s for sure.

Do any themes or recurring questions come up in the dialogues?

A lot of people wonder how I contracted HIV at age 11. So I’ve been explaining a bit about the blood scandal of the 1980s and how it impacted the bleeding disorders community. It’s a huge part of the history of this epidemic; blood safety today is a reality because of the loss faced by the bleeding disorders community. Some people have skimmed the tweet and made the assumption that I am gay because I have HIV. It’s not the first time or last time that will happen, and I’ve never cared about that or rushed to correct someone who makes the mistake. To me what’s important is: Did you get the point of the tweet? Do you feel like a life of value is measured by a bank account? Ultimately, are you comfortable in your own skin?

Has this incident given you any insight into the general public’s awareness of HIV today?

I’m pretty tapped into that already, having been an HIV educator for about two decades now. So I understand the different places people are coming from. And with this tweet, they came from every aspect. From fear of having contracted HIV to being curious about how a kid at age 11 contracts HIV. So many people shared their own stories of loss.

HIV is still an issue today. We’ve made incredible gains with advancements in treatment, PrEP [pre-exposure prophylaxis], and U=U [Undetectable = Untransmittable]. I have a story that spans the milestones of each decade of this epidemic, so I can relate to just about any situation someone’s going through. That doesn’t mean I have the answers, but it does help in lending an ear. When people are telling their stories, it’s an honor to listen—you just don’t know how long they’ve been wanting to share those feelings.

It looks like you’ve been very active in responding to tweets? Is that the case?

Yes, as active as I can be. I only saw the original tweet because I was laid up with a bleed. Still am. So I’m juggling Twitter fame with doctor’s appointments! And I hardly ever go on Twitter—I pretty much use Twitter to read about rumors in the world of professional wrestling. So when I popped off that tweet, I figured, “That’s good for about 20 likes.” A few hours later, I was on the toilet and said, “Holy shit!” It had gotten hundreds of RTs at that point. I’ve heard viral tweets have a 36-hour life span, so I figured I should answer questions and try to educate before the next dancing baby video macarenas into the spot.

Editor’s note: Shawn offers an update and behind-the-scenes details in his POZ blog post titled “Going Viral, Bleeding Out My Ass and #DoingItMyWay. You don’t want to miss it.